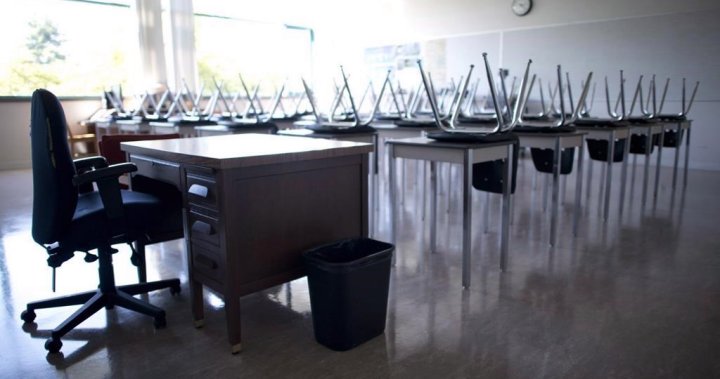 Six out of 10 Canadians (58 per cent) believe teachers deserve higher pay during the COVID-19 pandemic, according to exclusive Ipsos polling done for Global News.

Nineteen per cent of Canadians strongly agreed while 39 per cent somewhat agreed teachers deserve more pay considering the challenges they’ve had to face throughout the pandemic, including the shift to virtual learning.

Conversely, 42 per cent disagree (13 per cent strongly and 28 per cent somewhat), with the above sentiment.

Read more: New research aims to discover how many teachers and staff contracted COVID-19 in Canada

According to the polling, the divide could come down to politics, with the majority of NDP and Liberal supporters (80 per cent and 68 per cent, respectively) in favour of teachers receiving a higher wage while only 42 per cent of Conservative voters said they would support a wage increase.

“If you say you would vote for the NDP in the next federal election, paying teachers more for their work during the pandemic is a no brainer for you,” said Ipsos CEO Darrell Bricker.

READ MORE: Teachers may be bigger drivers of COVID-19 in schools than students: U.S. CDC study

“But with recent polling indicating that Canadians are largely unwilling to bear an increased tax burden, it’s difficult to know where this money would come from,” the polling stated.

Furthermore, the polling suggests the majority of Canadians (54 per cent) believe schools across the country have been run well during COVID-19, while 13 per cent strongly disagree and 33 per cent somewhat disagree.

“But those with the most hands-on experience with how schools have been run – parents with kids at home – have a more positive view than others,” said Bricker. “Sixty-four per cent think our schools have been well run.”

A breakdown by province in regard to whether schools were run well during the pandemic is as follows: 61 per cent in both the Atlantic and the Prairies, 59 per cent in British Columbia, 58 per cent in Alberta, 52 per cent in Ontario and 48 per cent in Quebec.

Exclusive Global News Ipsos polls are protected by copyright. The information and/or data may only be rebroadcast or republished with full and proper credit and attribution to “Global News Ipsos.” This poll was conducted between March 2-3, 2021, with a sample of 1000 Canadians aged 18+ interviewed online. The precision of Ipsos online polls is measured using a credibility interval. This poll is accurate to within ± 3.5 percentage points, 19 times out of 20, had all Canadians aged 18+ been polled.