More than 655,000 doses of the Oxford-AstraZeneca vaccine from the global vaccine sharing alliance known as COVAX, are scheduled to arrive and be distributed to provinces in the week ahead, but most provinces have already said they plan to put them on ice in reserve for second doses.

Health Canada, meanwhile, approved the Pfizer-BioNTech vaccine for children 12 and older on May 5.

Prime Minister Justin Trudeau says almost 50 per cent of eligible adults in Canada have received at least one shot of COVID-19 vaccine.

All people in the province aged 30 and older are now able to book an appointment for a first dose of COVID-19 vaccine. 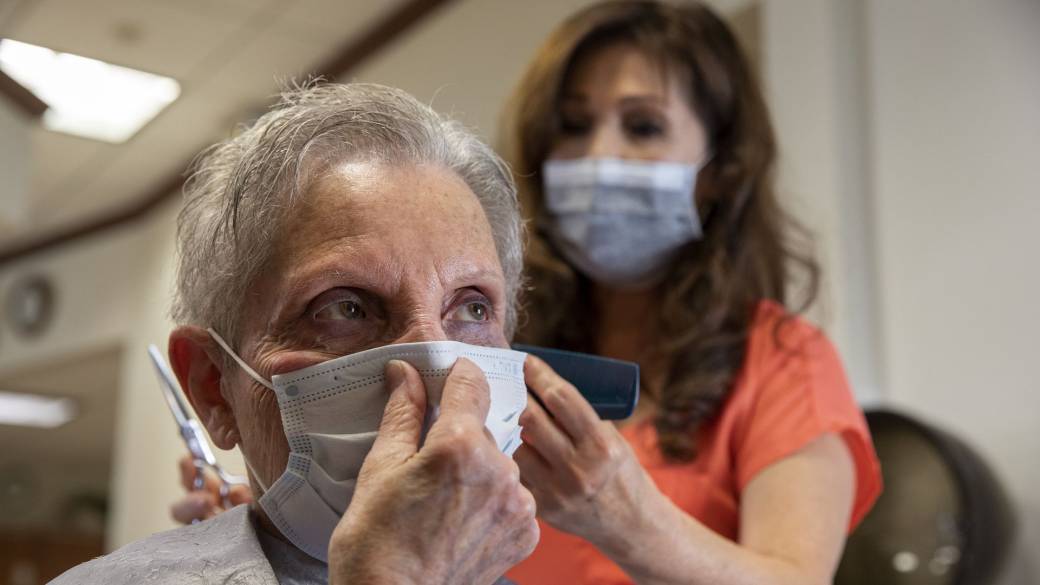 1:53
To mask or not to mask: New COVID-19 guidance confuses vaccinated Americans

To mask or not to mask: New COVID-19 guidance confuses vaccinated Americans

Nova Scotia is stopping the use of AstraZeneca’s COVID-19 vaccine as a first dose.

The Health Department says the “decision is based on an abundance of caution” due to an observed increase in the rare blood-clotting condition linked to this vaccine.

The department also says it has enough mRNA vaccine to immunize people age 40 and older, and it will reschedule anyone who was to receive AstraZeneca to instead be inoculated with Pfizer-BioNTech or Moderna “in a timely manner.”

People aged 35 and older can book appointments for the Pfizer or Moderna COVID-19 vaccines at clinics across the province.

In Prince Edward Island, residents as young as 16 can book a COVID-19 vaccine.

In New Brunswick, all residents 30 and older can book vaccine appointments.

Individuals 16 and older who have two or more chronic health conditions are also eligible.

In Quebec, all residents 18 and older are able to book a COVID-19 vaccination appointment.

The province’s health minister says Quebecers 12 to 17 years old will be offered a first dose of COVID-19 by the end of June and will be fully vaccinated by the time they return to school in September. 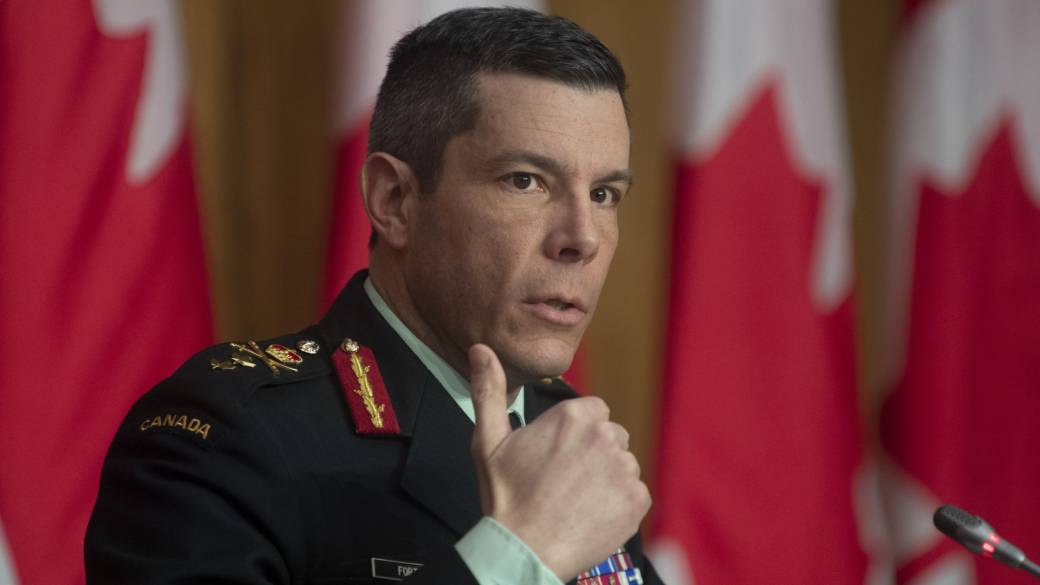 The age of COVID-19 vaccine eligibility is currently 40 across Ontario.

The province also says it’s developing a plan to vaccinate children aged 12 to 17 starting in June.

The province, meanwhile, has announced a pause on using AstraZeneca for first shots due to an increased risk of a rare blood-clotting syndrome linked to the vaccine.

The province’s top doctor says the decision was made out of “an abundance of caution.”

Dr. David Williams stressed that AstraZeneca recipients made the right decision, based on the advice available at the time, to get that vaccine.

Manitoba is using the Pfizer and Moderna vaccines for all people aged 18 and up. These are available through a few channels including so-called supersites in larger communities. Health officials plan to continue reducing the age minimum, bit by bit, down to age 12 by May 21 at the latest.

All adults in the Far North, as well as front-line workers with proof of employment, are also eligible.

The province previously expanded its vaccine delivery plan for people in more vulnerable groups to include all pregnant women and 16- and 17-year-olds who are considered clinically extremely vulnerable.

Saskatchewan also dropped the age at which people can receive the Oxford-AstraZeneca vaccine to 40 from 55.

The province says all Saskatchewan residents over 12 will be eligible for vaccination by May 20. 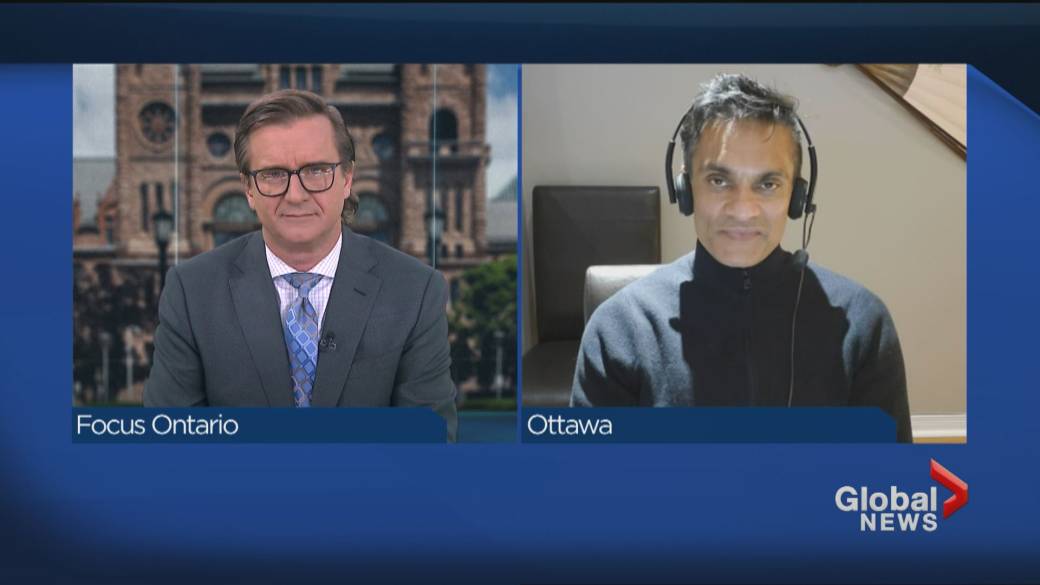 Every Albertan aged 12 and older is now eligible for a vaccine.

For the Oxford-AstraZeneca vaccine, the province lowered the minimum age to 30. They are, however, reserving the remaining supply for second doses when people are eligible. Officials say the second dose will be given 12 weeks after the first.

More than 250 pharmacies are offering immunizations. Ten physicians’ clinics across the province are also providing shots as part of a pilot project.

About 15,000 workers at 136 meat-packing plants across the province can also get shots at on-site clinics, pharmacies and clinics.

Alberta has said it is extending the time between the first dose and the second to four months. But some cancer patients, transplant recipients and anyone being treated with an anti-CD20 monoclonal antibody such as Rituximab are able to book a second dose 21 to 28 days after their first.

All B-C residents over age 25 can now book their COVID-19 shot, while those 18 and up will be able to do that starting Monday.

Almost 2.4 million doses of the vaccines have been administered in the province, about 125,000 of those are second doses.

The province has said it will hold its remaining supply of Oxford-AstraZeneca vaccine to use as second shots for people who initially received that vaccine.

Two people in the province have survived the blood-clotting disorder connected to the AstraZeneca vaccine. 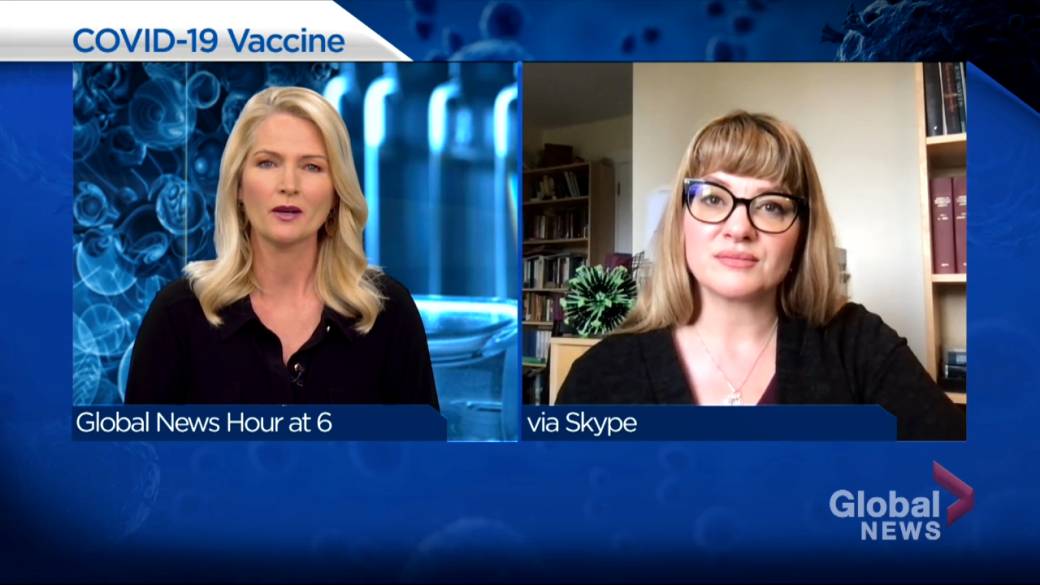 The territory had expected to finish its vaccine rollout of first and second doses by the end of April.

The Northwest Territories is now offering vaccinations against COVID-19 to young people between 12 and 17.

The territory, which has only been using the Moderna vaccine, recently exchanged some of that for doses of the Pfizer product, which Health Canada has now approved for anyone as young as 12.

Anyone 18 years of age or older can get a COVID-19 vaccine.

Yukon’s health minister says the territory will be giving youths between 12 and 17-years old a first dose of the Pfizer-BioNTech vaccine before the school year ends in June. 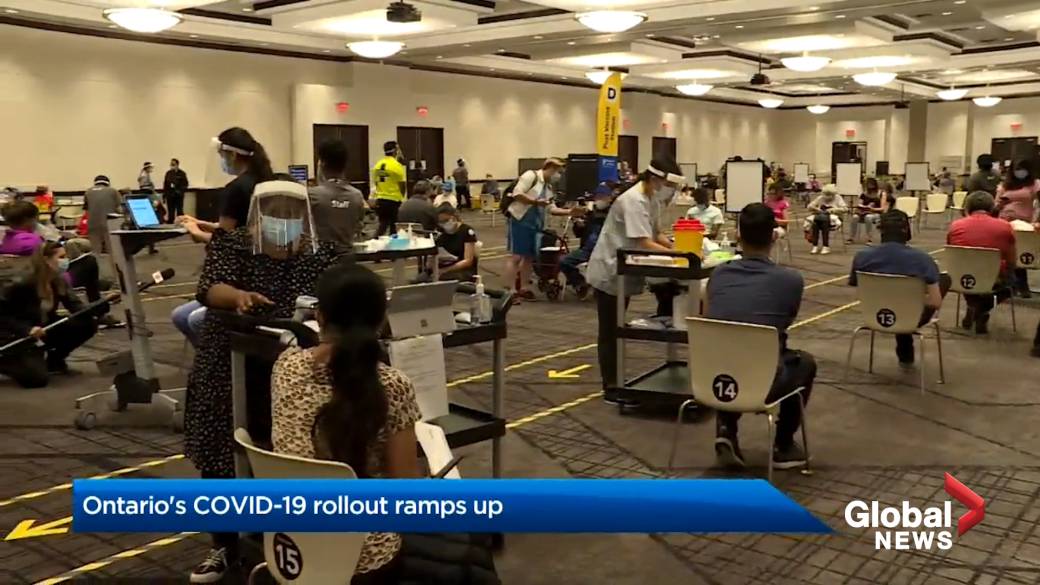 1:59
Ramped up vaccine roll out in Ontario prompts questions about what is needed to start reopening the economy

Tracy-Anne McPhee says the territory has struck a deal with the federal government to acquire enough doses to fully vaccinate all 2,641 youths in that age range.

She says the goal is to provide a second dose by the end of July.