Health Canada anticipates a total of 36.5 million doses from Pfizer-BioNTech, Moderna and the AstraZeneca vaccine from the Serum Institute of India by June 30.

Read more:
Where is Canada now in its rollout of the COVID-19 vaccine?

Health officials say vaccinations have begun for first responders. They say pre-registration for COVID-19 vaccines has opened for people aged 70 or older and for home-support workers.

Newfoundland and Labrador announced March 3 it was extending the interval between the first and second doses of the COVID-19 vaccine to four months.

Public health officials said the change will help them vaccinate 40,000 more people with a single dose by the end of March. Liberal Leader and incumbent Premier Andrew Furey said the decision is a game changer for the province’s vaccination prospects. 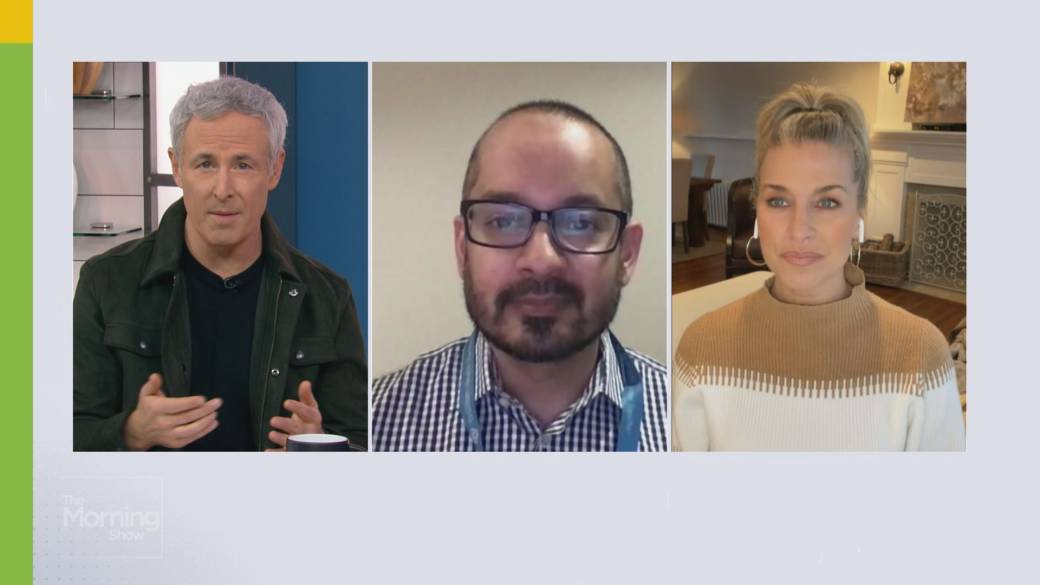 Nova Scotia plans to have vaccine available to at least 75 per cent of the population by the end of September 2021.

The province is planning to use mobile van clinics to vaccinate about 900 people who work at or use homeless shelters in the Halifax area.

Public health is partnering with pharmacists and doctors to provide the vaccines at 25 locations.

Nova Scotia, meanwhile, has added front-line police officers to the list of people eligible for vaccination during the second phase of the province’s rollout plan, joining groups such as long-haul truck drivers and hospital workers over the age of 60.

Read more:
A look at how Canada approved 5 COVID-19 vaccines in under a year

The province is offering the Oxford-AstraZeneca COVID-19 vaccine people ages 18 to 29 who work in gas stations and convenience or grocery stores.

The announcement on March 16 came after the province opened AstraZeneca vaccination appointments a week earlier to young people in the food and beverage sector. 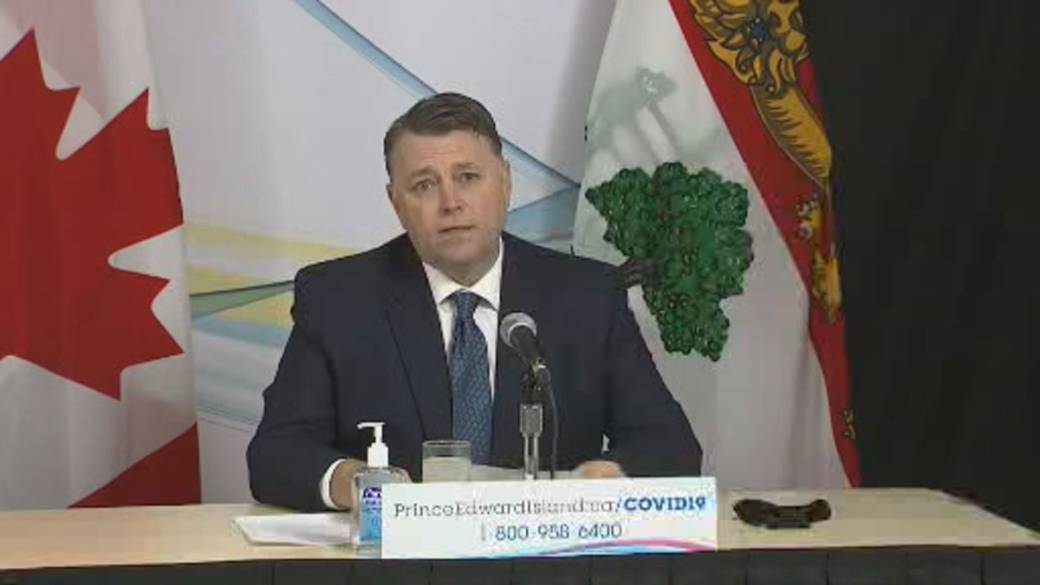 Health officials announced March 18 that people 80 and older, health-care professionals who have close contact with patients, and people with complex medical conditions are eligible to receive a COVID-19 vaccine.

People 80 and over, a caregiver or a family member acting on their behalf can make an appointment for a vaccine at a pharmacy.

Quebec started vaccinating older seniors on March 1 after a first phase that focused largely on health-care workers, remote communities and long-term care. In Montreal, mass vaccine sites, including the Olympic Stadium, opened their doors to the public as the province began inoculating seniors who live in the hard-hit city.

COVID-19 vaccination appointments opened March 10 for residents 70 and older across Quebec. The minimum age is currently set at 65 in Abitibi-Temiscamingue and Cote-Nord. However, Montreal is dropping the age limit to 60.

Premier Francois Legault says his government’s goal is for all adult Quebecers who want a COVID-19 vaccine to get at least one dose by the province’s Fete nationale on June 24. He also said the province’s vaccination campaign will allow all Quebecers aged 65 and over to be vaccinated with one dose by mid-April. 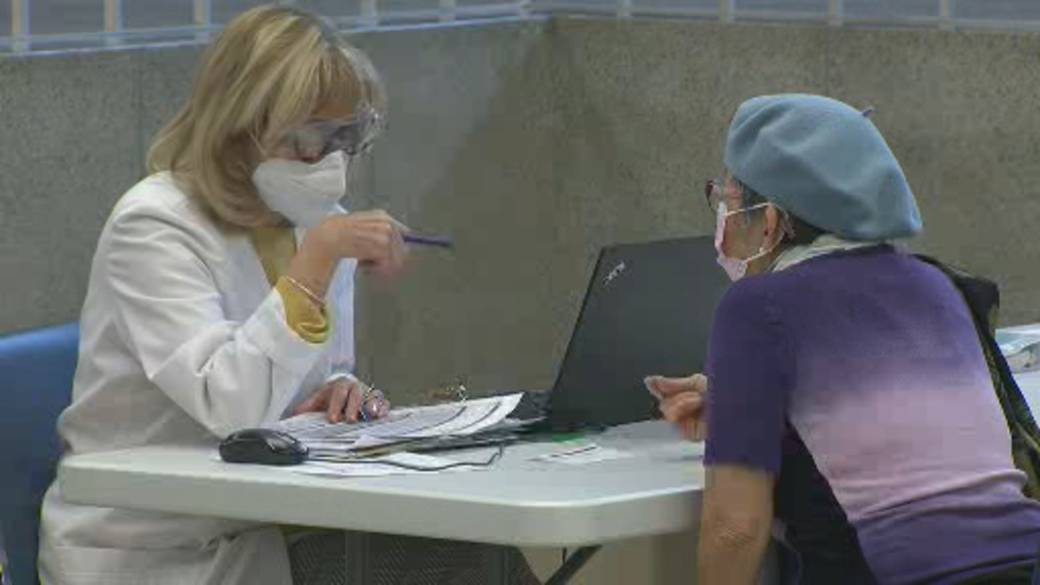 Quebec, meanwhile, is looking to enlist between 20 and 50 companies across the province to operate vaccination hubs to help accelerate its immunization campaign for people under 60.

To be part of the program, companies must commit to vaccinating between 15,000 and 25,000 people over a 12-week period between May and August.

Quebec will provide the vaccines and necessary equipment and run the online appointment portal. The program will begin when residents under the age of 60 become eligible to be vaccinated, with a goal of fully vaccinating 500,000 Quebecers.

People aged 80 and older were the first eligible to use the system. Starting March 22, people age 75 and older will be able to make appointments through the booking system.

Ontario focused its initial vaccine effort on those in long-term care, high-risk retirement home residents, some health-care workers and people who live in congregate care settings. 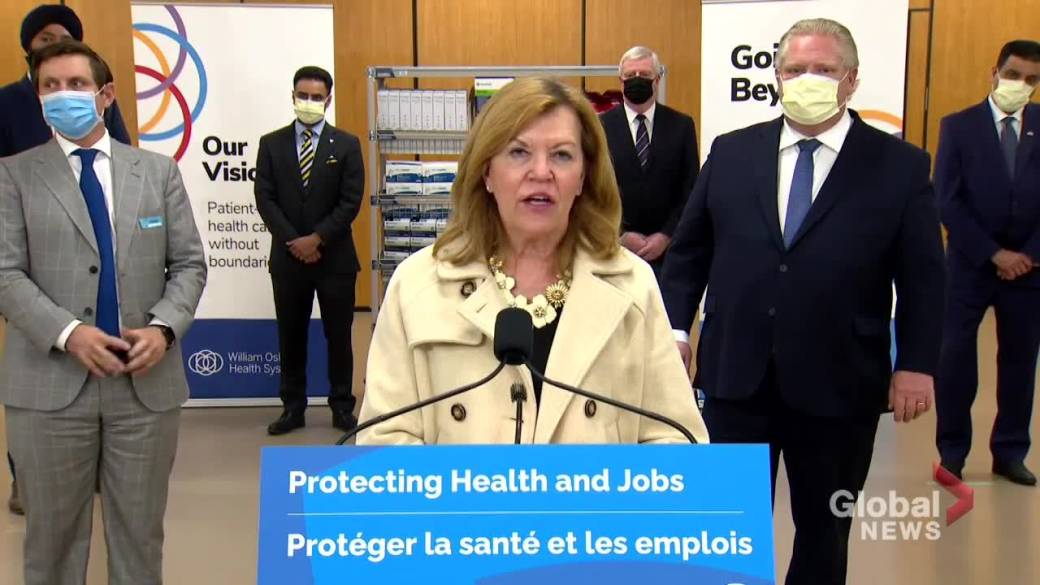 A pilot project at more than 300 pharmacies in Toronto, Kingston and Windsor Oxford-AstraZeneca started offering shots to those aged 60 to 64 in March.

That program expanded on March 22 to offer shots to people aged 60 and older. Some primary care physicians are also offering Oxford-AstraZeneca shots to eligible patients in that age range.

The pharmacy pilot will expand to 700 locations across the province in the coming weeks, then to approximately 1,500 sites as supply becomes available.

The interval between vaccine doses has been extended to four months in Ontario.

Manitoba is starting to vaccinate people aged 65 and older and First Nation people aged 45 and older. Health officials plan to reduce the age minimum, bit by bit, over the coming months.

Eligibility was recently expanded to include nearly all health-care workers, including those who do not provide direct patient care. All people who work in congregate living facilities are also able to get vaccinated.

Dr. Joss Reimer, medical lead of the province’s vaccine task force, has said inoculations could be open to all adults in the province by August if supplies are steady. There are supersites in cities where people can get vaccines and pop-up clinics have begun in rural and northern Manitoba communities for people who are eligible. 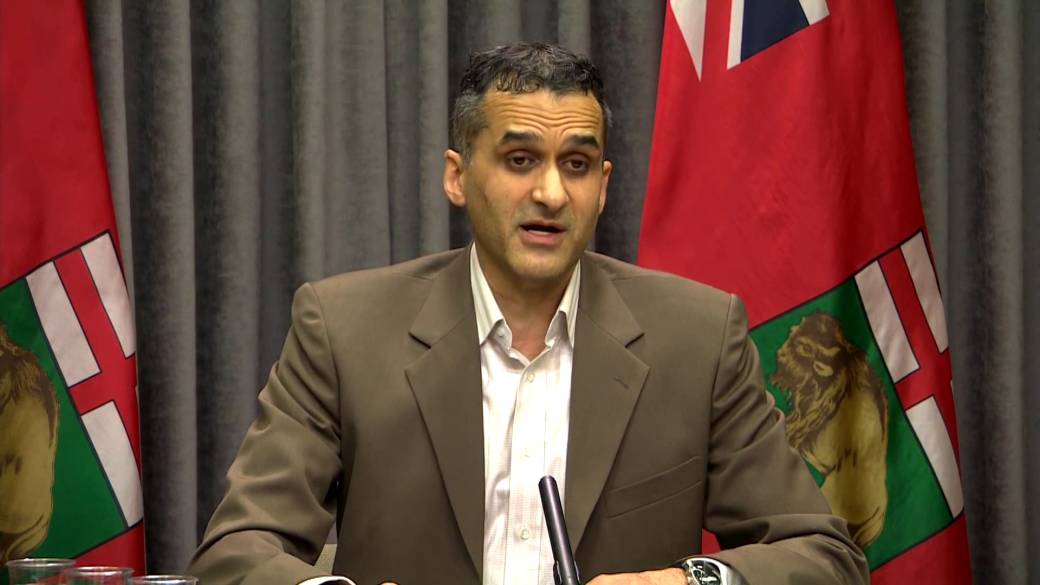 Health officials say the province has capacity to deliver 20,000 doses each day, but are currently hindered by limited supply.

Manitoba has already indicated it would opt for a four-month interval between doses.

The military is also being deployed to northern Manitoba to help vaccination efforts in 23 remote First Nations. Up to 200 members will help set up sites, transport people and administer doses. The goal is to vaccinate 100,000 First Nations people in 100 days.

The Saskatchewan Health Authority is booking vaccinations for residents aged 62 and older. The minimum age drops to 50 for people living in the Far North.

Those deemed to be medically vulnerable and have underlying health conditions can also get a shot, but have to wait to receive a letter first. Priority health-care workers are also on the list.

The province plans to open more drive-thru vaccination clinics once its receives the next shipment of Oxford-AstraZeneca shots. To date, the province has done around 144,000 vaccinations. 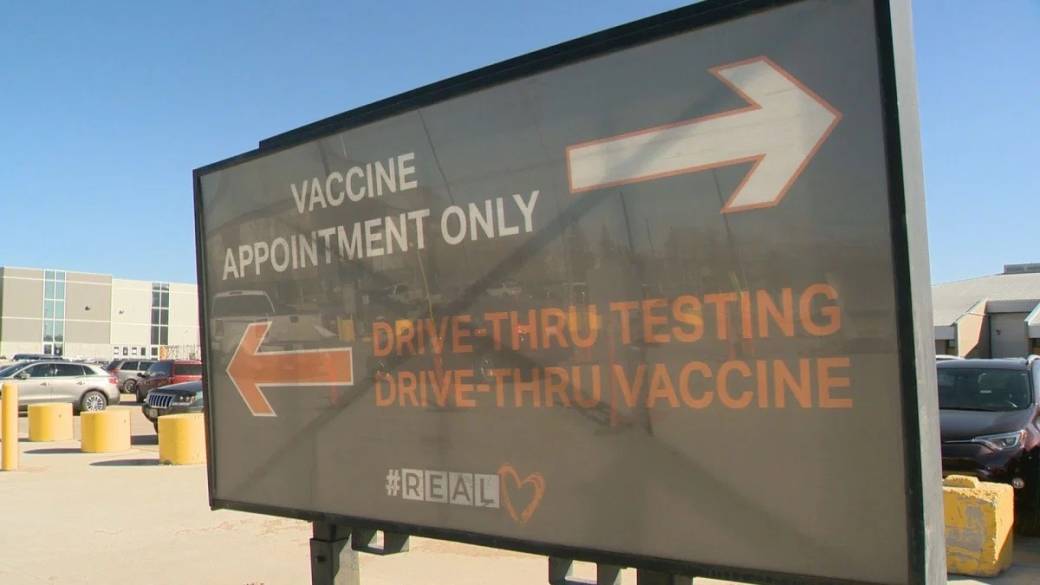 Health Minister Tyler Shandro has said the province expects to offer all Albertans aged 18 and over a first dose of vaccine by the end of June.

On March 15, residents aged 65 to 74, and First Nations, Inuit and Metis aged 50-plus, were allowed to begin booking. The province had originally not expected to begin this stage of vaccination until April.

In April, the Alberta government aims to start offering the vaccine to people with some chronic health conditions born between 1957 and 2005. That includes people with certain lung, kidney, liver and heart diseases, people treated for cancer in the past year, those with severe mental illness and substance use disorders, and pregnant women.

After that, vaccines will be available to more health-care workers and people with jobs in certain congregate living settings, such as jails and homeless shelters. Meat plant workers will also qualify in this phase.

Alberta has also said it will follow other provinces by extending the time between the first dose and the second to four months.

Read more:
Why are Alberta paramedics and police getting COVID-19 vaccines before firefighters?

The B.C. government is accelerating the timeline for the COVID-19 vaccine once again, allowing people who are “extremely clinically vulnerable” and some seniors to book their shots earlier than expected.

The Ministry of Health says that people at higher risk from COVID-19 due to existing medical conditions, including transplant recipients and those with cancer and severe respiratory conditions, will be able to register for their vaccine beginning Monday.

This group of people was originally scheduled to receive their shots in Phase 3 starting in April, but Health Minister Adrian Dix said the province has made tremendous progress on its age-based program and has additional vaccine supply. 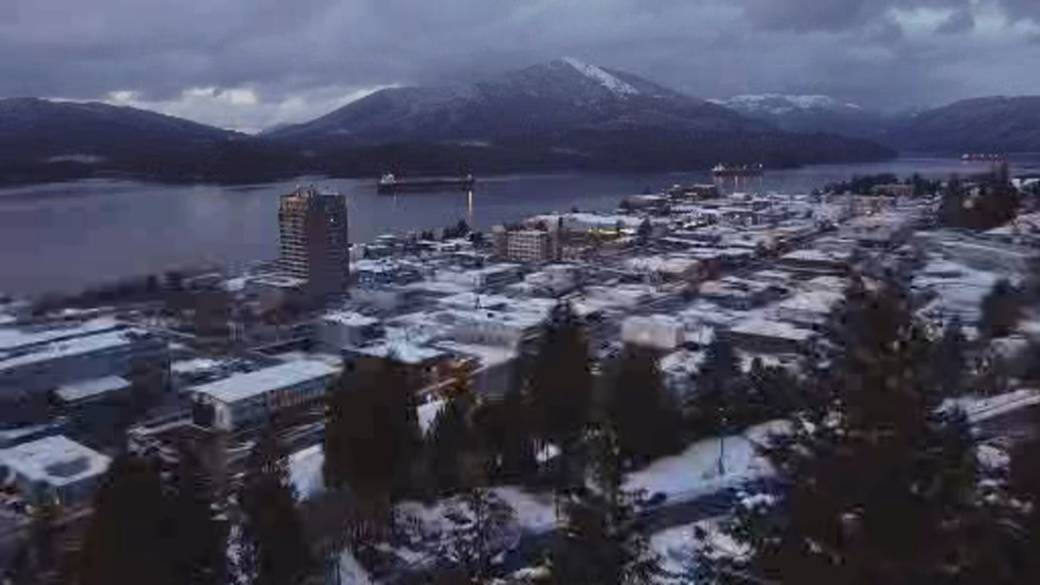 3:08
COVID-19 immunizations begin for all adults in B.C. hot spot

The government said the new timeline means that about 200,000 people in B.C. aged 16 years or older who are clinically extremely vulnerable will receive their first dose of vaccine in the coming weeks.

The province has also announced a partnership with 14 businesses in the tourism and hospitality sectors that have been hit hard by the pandemic to use more than 1,400 laid-off workers to provide non-clinical help with the COVID-19 immunization rollout.

Nunavut’s priority populations are being vaccinated first. They include residents of shelters, people aged 60 years and up, staff and inmates at correctional facilities, first responders and front-line health-care staff.

After a COVID-19 vaccine is administered, patients will be tracked to ensure they are properly notified to receive their second dose.

The Northwest Territories says it expects to finish its vaccine rollout by the end of April. It also expects to receive enough doses of the Moderna vaccine by the end of March to inoculate 75 per cent of the adult population.

Yukon says it will receive enough vaccine to immunize 75 per cent of its adult population by the end of March.