Adam Larsson is playing his way into a new Edmonton Oilers contract.

Indeed, I find it hard to imagine where the team would be next year without Larsson, now 28-years-old, on hand to provide shut-down defence and hammer down hard on opposition power forwards like the Tkachuk bros, Brady of Ottawa and Matthew of Calgary.

Such forwards power over and around most NHL d-men, but not Larsson. As often as not he’s the bulldozer, not the bulldozee.

Every game he serves up a plate of brute sandwiches to opposing forwards, washing it down with two shots of nasty.

Stats don’t tend to cover all that Larsson brings to a game, but hit and blocked shot totals hint at his defensive superiority. This year, he’s averaging 9.48 hits per 60 and 9.48 blocks per 60, with Darnell Nurse second for hits at 5.34 per 60 and Kris Russell second for blocks, 6.24 per 60. 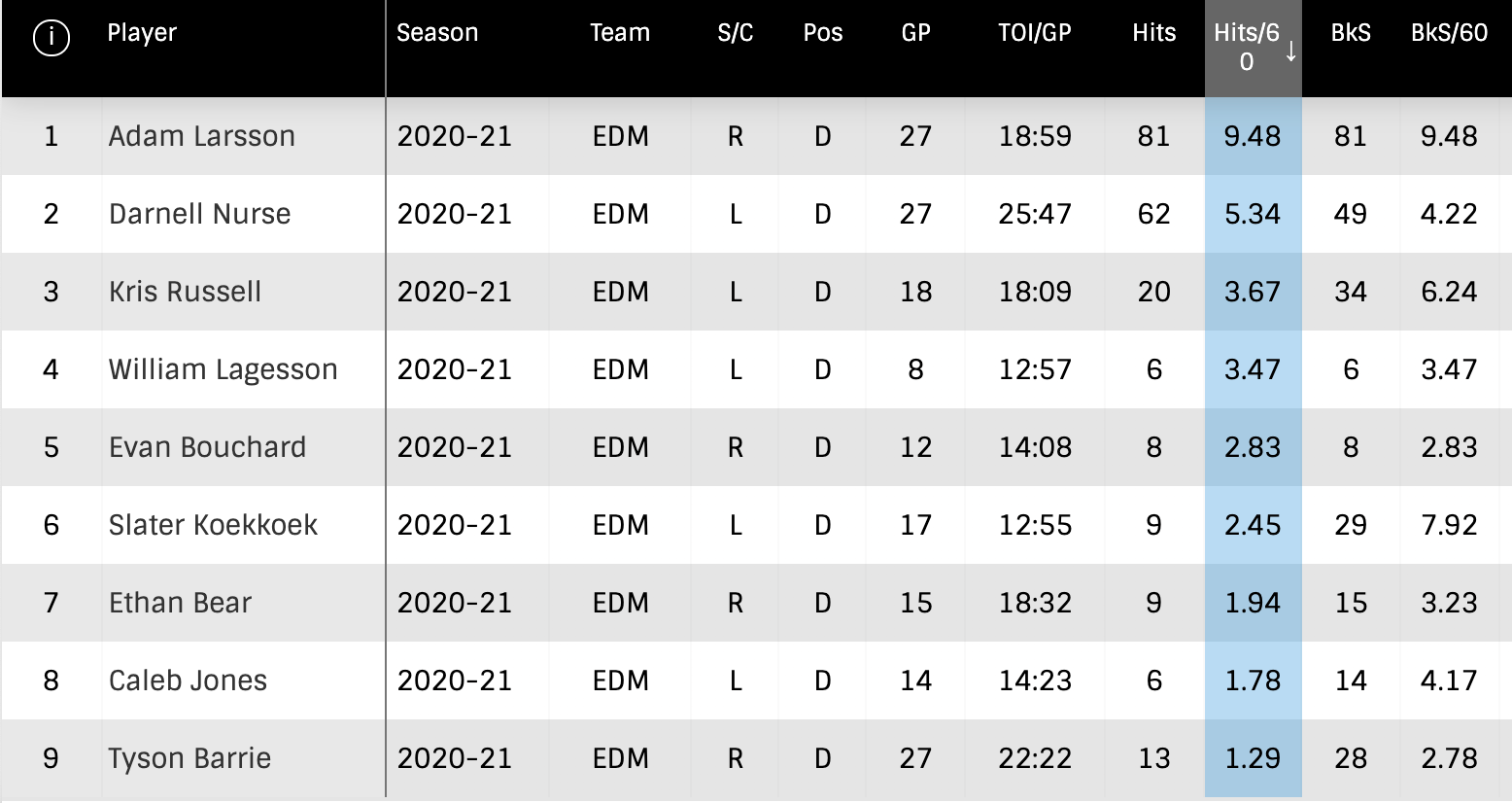 Larsson battles so hard they’ve already reserved him a chair at Ragnar Lothbrok’s table. He is not the smoothest of skaters of the slickest of passers. He comes at attackers kind of like the Tasmanian Devil from Bugs Bunny, a whirl of elbows, shoulders and stick checks assaulting the puck carrier. He is rarely caught out of position on defence. And while he’s not brilliant with the puck, he can make a sound pass and sometimes make a positive contribution when he joins the o-zone attack.

When it comes to two-way performance from Edmonton d-men this year and last year, two defencemen have stood out, Larsson and Nurse. Larsson has made a lower rate of major mistakes on Grade A chances against than any other Top 4 d-man on the Oilers. He’s more than hanging in there, even against tough competition. 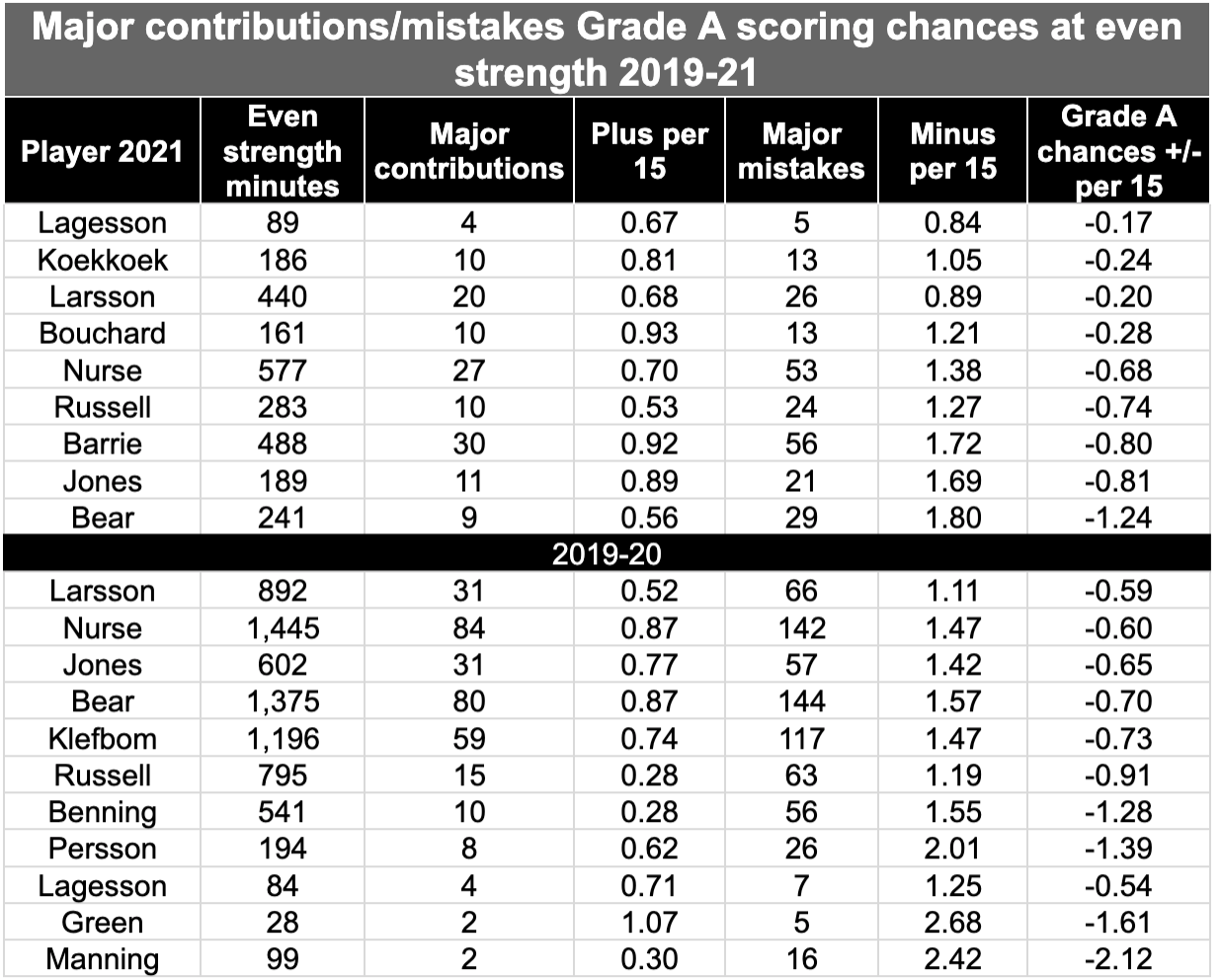 Larsson, 28, is in the final year of a deal that pays him $4,166,666 per year. He’s been good value for the Oilers at that price. On Oilers Now host Bob Stauffer estimated something in the range of $2.75 to $.3.25 million per year on his next deal. If it’s a three year deal, Larsson would be 29 in the first year of the contract, 30 in the second, 31 in the third, so not so old that you can expect a major drop off in performance. It’s not a risk free contract, given Larsson’s rugged style and his injury history. He was out 22 games last year, though he’s played every one this year. But betting on a d-man until he’s 31 isn’t an outrageous notion.

As for when the Oilers should sign him, that gets tricky. If he and the team can work out a hand shake agreement on a deal, then sign it after the Seattle expansion draft, then Edmonton won’t have to protect Larsson in that draft. This would be optimal for the team as a hole.

At the same time, if Edmonton were to sign up Larsson now and protect him in the draft, you won’t hear any complaining from me. In the end, Edmonton has five d-men it will likely want to protect, Nurse, Larsson, Caleb Jones, Ethan Bear and William Lagesson (with Tyson Barrie possibly leaving for bigger bucks and term as an Unrestricted Free Agent and the team not having to protect Evan Bouchard in the expansion draft). Edmonton is likely going to opt to protect seven forwards and three d-men. That means the Oilers will likely lose one of Jones or Lagesson to Seattle, which will provide a spot or two for Kris Russell, Dmitri Samorukov, Slater Koekkoek, Philip Broberg, Theodor Lennstrom or Markus Niemelainen to fill on the left side of the roster next season.

But I can see the defensive group being something like this next year:

McCURDY: Does Kassian for DeBrusk work for both teams?

STAPLES: Who are Oilers’ top power couple and how can they drive success?

LEAVINS: 9 Things, including memories of Walter Gretzky and other hockey dads