After a long week, Edmonton Oilers finally spring back into action vs. Leafs

While there’s no truth to the rumour that Edmonton Oilers’ trip to Toronto was via the Suez Canal, fans of the club can be forgiven for thinking that way. Six long days after leaving Edmonton for an eastern road trip, the Oilers may finally get to play a hockey game.

I say “may” because at this time on Monday we all were thinking a game was imminent. Didn’t happen. Instead, the Montreal Canadiens found their season on hold after a troublesome COVID test, and with them, the Oilers who were visiting La Belle Province for a scheduled tripleheader. None of the games went ahead; instead, the Oilers rested up, did their reps on practice ice, and prepared for tonight’s showdown in T.O.

Games or no games, it’s been a good week for the Oil. Last Saturday morning the club had an 82% chance of making the playoffs according to my distant cousin Micah Blake McCurdy of HockeyViz. By Sunday morning after the Oilers toppled Winnipeg 4-2, that projection had jumped to 87%. In the six days since then, that number has surged a further 5% and now sits at a strong 92% despite the Oilers having not played a single game. 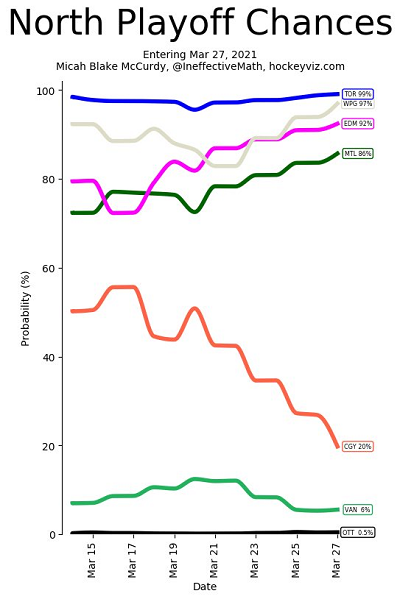 The Habs have enjoyed similar upward mobility in their playoff outlook, and for the same reason. Look way, way down that chart for the tumbling fortunes of the two clubs on the other side of the playoff cutline. Calgary Flames have lost four consecutive games, all in regulation, and have seen their playoff chances tumble from 50% to 20% in a single week. Vancouver Canucks, meanwhile, crashed from the sugar high of an extended series of Bettman Point games and were thumped twice in succession on home ice by the Jets, who went on to beat the Flames in regulation last night to all but cement their own playoff spot.

The North Division standings show just a two-point gap between fourth and fifth place, but the divide between haves and have-nots is stark. 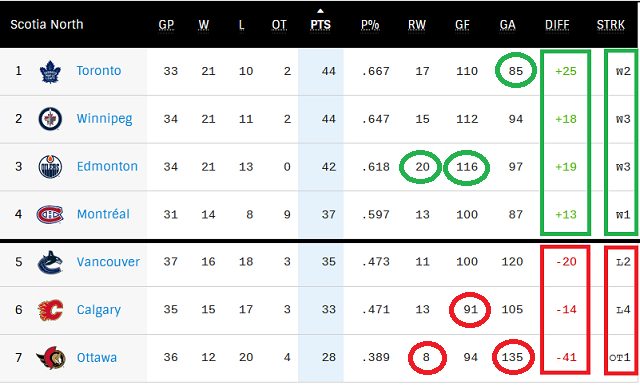 Montreal now has a cool 6 (six!) games in hand on Vancouver, and 4 on Calgary, so focus not on the points column but on the adjacent points percentage. The difference in quality of the top four vs. bottom three is better seen in the Goals For, Against, and Differential columns. The column at far right showing current streaks also tells a tale about the trends.

The Oilers have earned their points honestly; their 20 wins in regulation are not only by far the most in the North Division but tied for the NHL lead with the defending Stanley Cup champion Tampa Bay Lightning. Alas, they have suffered all their losses the same way, so have not benefited at all from the NHL’s Cockamamie Point System™ which yields the following sort by points percentage:

The Oilers lone overtime game of the entire season occurred eight weeks ago today against tonight’s opponent, Toronto Maple Leafs, and lasted just 42 seconds before Connor McDavid tipped home Leon Draisaitl‘s shot-pass to end it in most satisfactory fashion. That was the first contest in a 25-game run that has seen the Oilers roll to an 18-7-0 record, with the last 24 of those games having all been decided in regulation which may be some sort of record in the Bettman Point Era.

Over the course of those 25 games the Oilers have posted five different winning streaks of three games or longer, outscoring their collective opponents by 90 goals to 64, or slightly more than one full goal per game. This despite the major hiccup that occurred the last time these two clubs met, when Toronto rolled to three consecutive lopsided wins right here in River City, outscoring their generous hosts by 13 goals to 1 in the process.

That series occurred smack dab in the middle of two outstanding ~10-game rolls by the Oilers, who are no doubt itching to show the Leafs a display of that excellent hockey. And they’ll be fresh and raring to go, an unexpected situation since the original schedule had tonight’s encounter as the Oil’s 10th game in 16 nights and second of a back-to-back.

Still, as before it is not the be-all and end-all, not during a season featuring playoff games at the end of the rainbow. Playoff series >>> season series, after all.

Draisaitl echoed this sentiment in an avail yesterday. “We obviously didn’t play the way we wanted to in those three games against Toronto, but we knew we couldn’t let it slide any longer… you never know what’s going to happen at the end, we might be playing them in seven more games, so obviously we want to send a message, we want to beat them and show them we’re a good team too. These next two games are going to be fun, they’re going to be exciting, I think fans will love it… these two games are important, but they’re not the end of the world and they’re not season-deciding. Obviously we want to get them back…” 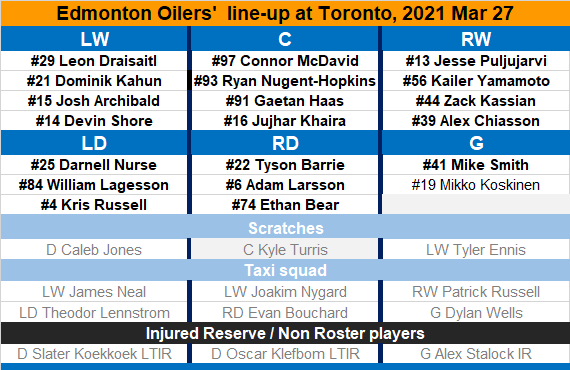 In his game day avail, Dave Tippett confirmed the return of Kailer Yamamoto to the line-up, though based on yesterday’s practice lines he will not be displacing Jesse Puljujarvi from the power line with McDavid and Draisaitl. Obviously that unit will be a key to the Oilers’ success. Worth noting that McDavid and Draisaitl were teamed up for the first time this season in the game following the Toronto sweep. One suspects both will be highly motivated to light the lamp a time or two.

Yamamoto slots in on a second line with Dominik Kahun and Ryan Nugent-Hopkins, a trio high on skill which comes up a bit “light” on size. It’s a big test for this trio as well, likely getting a steady dose of whichever of Auston Matthews or John Tavares that Leafs’ coach Sheldon Keefe doesn’t match up against the 29-97-13 group.

Indeed, the Oilers will need a strong effort from all 19 players against one of the top clubs in the North. It’s shaping up as a three-team dogfight at the top, and all three will be in action on tonight’s Hockey Night in Canada double header, Edmonton at Toronto first, then Winnipeg at Calgary later. With ideal results in both contests, the three could end the night all tied for first. It’s almost enough to make a red-blooded Oilers fan root for the Flames. Almost.

STAPLES: In praise of Gaetan Haas, protector of the defensive slot

STAPLES: Tyler Benson ready for another shot at NHL job

STAPLES: What has gone wrong with the Oilers PK this year?