Alberta’s justice minister issued an apology through social media on Tuesday afternoon days after he accused the federal government, the province’s Official Opposition and the media of wanting the health-care system to collapse under the weight of the COVID-19 pandemic.

“I would like to offer an apology for my recent comments on my personal Facebook account,” Kaycee Madu tweeted. “Alberta is facing an unprecedented public health crisis.

“My comments were wrong, as all Canadians want this global pandemic to end as soon as possible.”

Via Facebook on Friday, Madu posted that Alberta can’t risk giving COVID-19 a chance to “overwhelm our health-care system.”

“That’s what the NDP, the media and the federal Liberals were looking for and want,” his Facebook comment reads.

When Global News requested an interview about the comments on Monday, Madu was not made available. His press secretary said the minister stood by his remarks.

Madu’s comments were criticized by the NDP and Prime Minister Justin Trudeau.

“Madu’s comments are despicable, and he must apologize immediately,” David Shepherd, the NDP health critic, said in a news release on Monday.

On Tuesday, Trudeau called it “a shame to see people pointing fingers and laying blame and suggesting that anyone in Canada wants anything else than to get through this pandemic as safely as possible everywhere.”

“Playing politics at this point is just not what Canadians want to see,” Trudeau said.

During a news conference about the COVID-19 situation in Alberta on Tuesday afternoon, Premier Jason Kenney said he had never seen Madu’s comments when asked for reaction to them.

“I haven’t seen those comments but I believe no one wants the pandemic,” the premier said. “We shouldn’t be pointing fingers.

“COVID(-19) has caused a lot of us at various times to say things that we regret… And I just encourage everybody, whatever side of the political spectrum they’re on, to try to give each other a break right now.”

When asked if he would ask Madu to apologize, Kenney did not provide a direct answer and accused the NDP of not being supportive of the government in the early days of the pandemic.

“I’ll take a look at the comments and talk to Kaycee. He is a passionate defender of his community, and we’re all frustrated by where we’re at with COVID(-19),” the premier said. “COVID(-19) should not be a political football.

“From the very beginning, we had an Opposition that never sought to be supportive of broader efforts, unlike in other provinces where oppositions largely came together with government — at least at the beginning of the pandemic. That wasn’t the case in Alberta.

“My commitment is that we should all try to work together and assume the best about people’s motives.”

Watch below: Some Global News videos about the COVID-19 situation in Alberta. 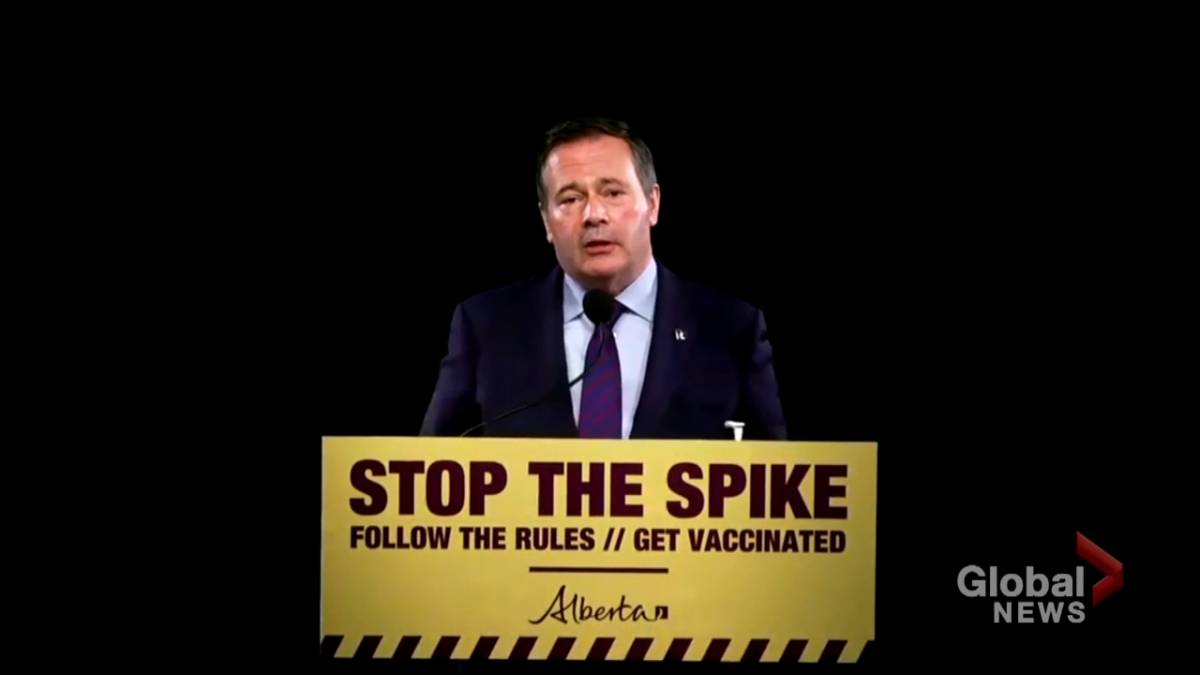 1:30
Kenney pleads with Albertans to ‘come together for the next month’ amid COVID-19 restrictions

Madu’s comments came as Alberta brings in stricter public health restrictions to try to slow the spread of COVID-19 in the province. Alberta has seen a sharp rise in coronavirus cases in recent weeks while per capita, the province has spent time leading North American jurisdictions for most infections.

When new restrictions were announced last week, Kenney said the province’s health-care system was buckling under the strain put on it by the novel coronavirus and that slowing the virus’ spread was key to not overwhelming hospitals and intensive care units.

–With files from The Canadian Press’ Dean Bennett