When Canada began to lock down its economy last March as the novel coronavirus spread across the country, Connie Kuipers knew she would need financial help immediately.

The Toronto, Ont. native, who was making a living cleaning homes and Airbnb suites, saw her client list quickly dry up. She was still in school working to become a life coach, not yet ready to begin her anticipated new career. And her two children were now home from school and needed support.

Kuipers applied for the Ontario Works social assistance program right away — something she said she never thought she’d have to do over 10 years of self-employment. But she knew the roughly $1,100 to $1,300 she’d receive per month wouldn’t be enough to live on for a sustained period, especially as a single mother.

“I was really grateful,” Kuipers said in an interview. “I was relieved — incredibly relieved — that that was going to be possible.”

Millions of Canadians like Kuipers signed up for the CERB, which became the Canada Recovery Benefit (CRB) in September. While most appreciated the help as they stared down months of unemployment and isolation, the program and its rollout saw some bumps: confusion over who was eligible plagued the launch, while some artists and gig workers were initially skipped over entirely.

Global News spoke to some of those who have lived primarily off federal aid for the past year to see how they’ve coped, what could have been done better, and their hopes for the future.

According to federal data, 8.9 million Canadians applied for either the CERB or expanded Employment Insurance benefits between March and early October. Over $81.6 billion was paid out to those applicants — $74 billion of which flowed through the CERB alone.

Since the CRB was unveiled in late September — lowering the monthly payment to $1,800, while further expanding EI eligibility — an additional $30 billion has been paid to nearly 3.1 million applicants.

Everyone who was interviewed echoed Kuipers’ relief that the CERB was introduced at all, especially compared to the lack of similar relief programs in countries like the United States. But they also agreed that it led to a drastic life shift.

“At the beginning of the pandemic, I had a savings account,” said Leah Allyce Canali, a Toronto musician. “I don’t have a savings account anymore. It’s all gone. It took a year and it’s gone.”

Those savings largely went towards home recording and filming equipment so she and her husband Mike Meusel, also a musician, could transition their performances to virtual spaces. Their credit cards have accumulated high amounts of debt as they tried to keep up with rent and bills.

“We have a home to live in,” she said. “We have food to eat. Our basics are covered, which is amazing. But it definitely is going to affect our future … because it just covers the bare minimum.”

The drop in income recently forced Chris Reed, a Vancouver performance artist who works in drag and digital media, to move from their downtown two-bedroom apartment to a studio — mainly because their roommate was also feeling the financial squeeze.

“It’s been just enough for bills and rent, maybe some food.”

“It’s been just enough for bills and rent, maybe some food,” they said about their CERB cheques.

Reed had to wait to apply for the CERB until April, when eligibility was expanded to not only allow people to earn up to $1,000 in extra income, but also include some self-employed artists and gig workers who were initially left out.

Even then, Reed said they are still barely scraping by while trying to live in one of the most expensive cities in the country.

“You had to push it,” they said. “I was trying to make as close to that as I could (to the extra $1,000) every single month, because, like, even with that, I’m still behind on bills, still behind on all of these things.”

The money being received also wasn’t enough to create a cushion for in case disaster struck.

Crystal Lee, also in Vancouver, has seen a slew of bad tenants leave her high and dry after renting out rooms in the six-bedroom house she shares. As one of the signatories on the lease, she’s been left on the hook for skipped rent payments, barely escaping evictions as she struggles to cover the payments with CRB money.

“I still owe money for December’s rent, even though January is paid off in full — just because I had a different set of people (in January),” she said.

“It’s been the hardest, biggest financial crunch I’ve ever faced.”

Lee’s son, who rents a room in the house, was also temporarily locked out of his Canada Revenue Agency account last month along with hundreds of users, after the CRA found some personal information may have been compromised. He didn’t receive payments for two application periods, making him unable to pay his mother’s rent.

In addition to the $2,250 she still owes in back rent, Lee and her son have had to defer insurance payments, while Lee has missed car payments as well.

“I haven’t been able to pay that $200 every month because I’ve needed the money for groceries, or trying to cover rent,” she said.

As Kuipers advanced her life-coaching education, she was able to get a job working for the program she’s studying with. But she’s aware that even that opportunity could suddenly disappear amid the uncertainty of the pandemic.

“It’s really good to have that backup (with the CRB),” she said. “But I’m feeling like I don’t need to apply again for the near future.” 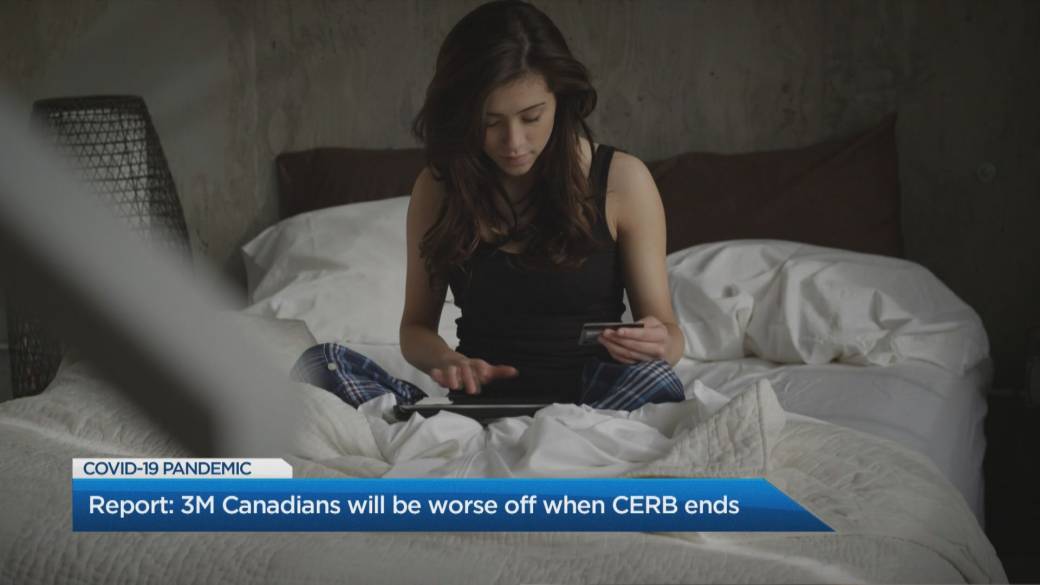 4:33Report says 3 million Canadians will be worse off when CERB ends

But others are stuck knowing that until lockdowns are fully lifted, the CRB and EI are their best hope to make it to the other side — particularly artists.

“(The CRB) felt specifically for us, the ones who can’t get back to work yet,” Reed said. “The venues that I was working at (are) not even close to being reopened. So for us, we’re pretty much at the halfway point in the pandemic still.”

Canali said while she and her husband have been able to scrape by with proceeds from virtual concerts and events, even those opportunities are starting to dry up as pandemic fatigue sets in.

“There’s burnout from the musicians and the performers because there’s not a lot of energetic feedback that’s happening,” she said. “And also there’s burnout for the people watching. It can be a tough sell to sell a virtual concert for the same price that you would sell an in-person concert, because it doesn’t feel the same. And I completely get that.

“We’re so virtual-based now, and so many people’s jobs are sitting on Zoom all day. So then do you want to come home and have a beer and sit down (in front of Zoom again)? Not a lot of people do.”

Reed and Canali are both hopeful that venues and the artistic industry at large are supported so they are ready to reopen when safe. But as Reed points out, those opportunities are starting to die out, leaving artists stressed about their post-pandemic future.

“(Big nightclubs) will thrive, but particularly the gay community, which has already been left with scraps, are going to have even less on the other side of this,” Reed said.

“I’m not thinking too far in the future though. I’m just trying to work now, create now, and stay calm. … But I don’t know what’s next.”

It’s why Reed, Canali and Lee say something like the CERB or CRB should be allowed to continue even after lockdowns are lifted, akin to a universal basic income. 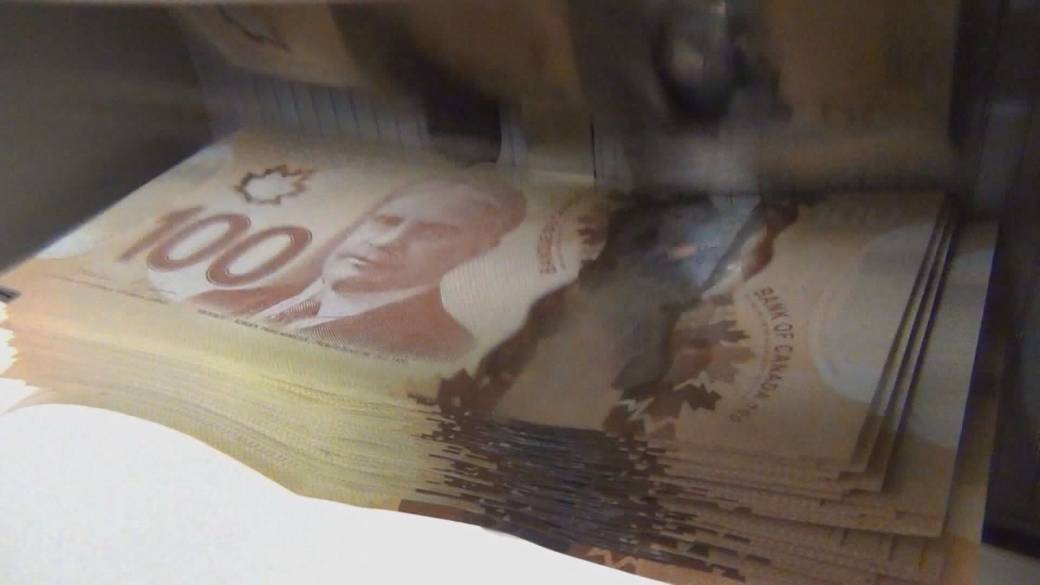 “I’m impressed with how much the rules changed on how much you can make while on it and the number of people it’s helped,” Lee said. “I’m hopeful that’s what a basic income program could look like.”

“I’m hoping this pandemic woke people up” to the possibilities of a post-capitalist society, she continued. “We do care about the people that live here. And we’ve got to start showing it in our government policies and start putting people above profits. Because people make the country, people make the economy, not the profits, you know what I mean?”

In February, Ottawa extended CRB eligibility another 12 weeks and extended the EI claimant period from 26 weeks to 50 weeks, as the country focuses on its vaccine rollout.

That would push the expiry of the CRB to late June, unless it’s extended again — which is something many agree should happen.

“I would really love to see some form of assistance going forward into 2022,” Canali said, pointing to artists and gig workers, in particular, who won’t see an immediate return to work.

“I think a lot of Canadians could really use that boost.”

Previous articlePost Pandemic: COVID-19 was a wake-up call for Canada's limited biotech industry. Will it improve moving forward?
Next articlePharmacy vaccine bookings to begin in Quebec