Canada’s chief public health officer said Sunday that the collective efforts to fight COVID-19 are paying off, even as the country sits at a ‘critical juncture’ in the fight against fast-spreading variants.

Dr. Theresa Tam’s comments come amid another 2,351 new cases of the virus announced on Sunday, which pushed the national caseload to 845,657. The country’s death toll now stands at 21,674 after another 44 deaths were reported, though over 792,600 patients diagnosed with the virus have since recovered.

To date, over 24.04 million tests and 1.43 million vaccine doses have been administered. Canada’s data on new cases Sunday, despite being the lowest recorded since early November, paints a limited snapshot of the virus’ spread across the country due to B.C., P.E.I., Northwest Territories and the Yukon not reporting new cases on the weekend.

Read more: Flying back to Canada? Here’s what you can expect at the new COVID-19 quarantine hotels

On Saturday, Tam took to Twitter with a statement that said COVID-19 disease activity continued to decline and vaccination was heading in the right direction.

“Our collective effort has begun to tip the balance in our favour,” she wrote.

2/2 We’re at a critical juncture with #VariantsOfConcern – we’ve worked hard but need to keep going to protect our progress & each other. Let’s all #BePartOfTheSolution, see the latest updates to our #COVIDKnowHow info & resources:https://t.co/w27G7rHASE

But she said Canadians need to maintain COVID-19 precautions to protect each other, especially as cases of more contagious variants are mounting across the country.

The faster-spreading COVID-19 variant first discovered in the United Kingdom has made its way into some schools in British Columbia, health officials announced late Saturday.

The superintendent of the Surrey School District tweeted a notice that had been issued to parents at Woodward Hill Elementary, Tamanawis Secondary and A.H.P. Matthew Elementary schools. 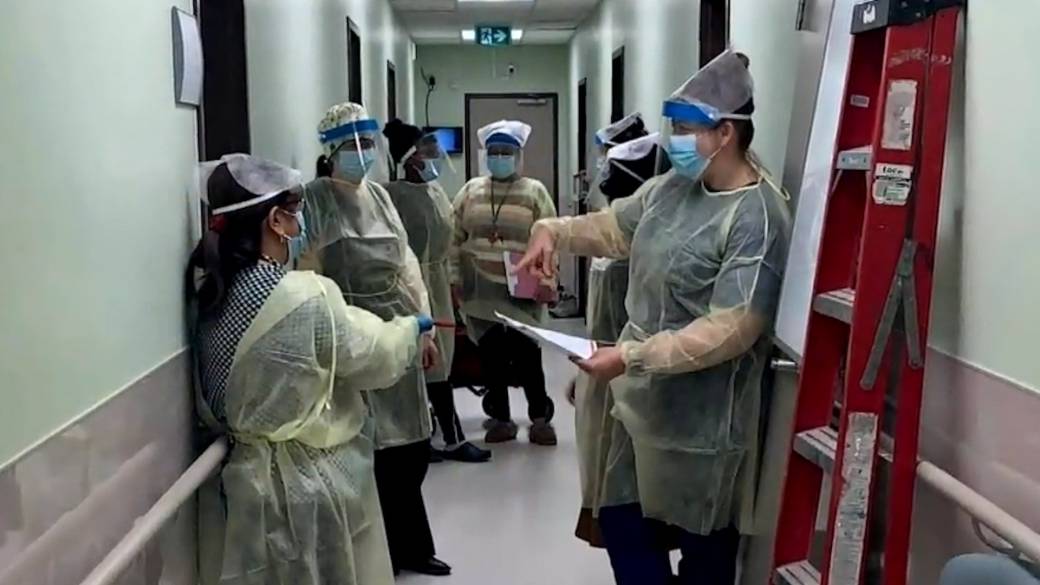 2:43“People are crying on the phone:” Indigenous communities grapple with PPE shortages

“People are crying on the phone:” Indigenous communities grapple with PPE shortages

Cases at at least two of the schools date back to late January, but were only recently confirmed to be variant-related because the testing takes longer, Superintendent Jordan Tinney said.

Quebec is also investigating a potential case of the variant at an elementary school in the provincial capital, health officials first announced Saturday

On Sunday, the province was dealing with 23 confirmed cases involving variants of concern as well as 329 presumptive cases under investigation, even as the province reported its lowest number of COVID-19 cases in five months.

But Health Minister Christian Dube warned Quebecers not be lulled into a “false sense of security” by the 666 cases on Sunday, as “the threat of new variants is very present,” he wrote on Twitter.

Ontario, meanwhile, reported 1,087 cases as the province prepared to lift a stay-at-home order in one long-standing hot spot on Monday.

The majority of the province’s regions will then have returned to the province’s colour-coded pandemic response framework, with stay-at-home orders remaining in place in just three regions — Toronto, Peel Region and the North Bay-Parry Sound district.

In a message published Sunday, Tam noted that COVID-19 has had a disproportionate impact on racialized communities. She said cases are 1.5 to 5 times higher in racialized communities in Toronto and Ottawa, while people living on First Nations reserves have a 69 per cent higher rate of infection compared to the general population.

“These disproportionate impacts among racialized and Indigenous communities are not due to biological differences between groups or populations,” she wrote.

“Rather, they reflect existing health inequities that are strongly influenced by a specific set of social and economic factors — things like income, education, employment and housing that shape an individual’s place in society.”

She said it’s imperative to work to fight racism in workplaces, education and health and social services systems, which she said has contributed to vaccine hesitancy in some communities and helped to create the inequitable living and working conditions that make some groups more susceptible to COVID-19.

As of Feb. 21, over 111,351,100 people have been diagnosed with COVID-19, according to Johns Hopkins University. A total of 2,466,100 patients have also succumbed to the virus, with the U.S., India, Mexico and Brazil continuing to lead in both cases and deaths.

— With files from Global News

Abortion facilities in rural areas in states where abortion is legal worry their lack of resources could not meet the increasing demand as there...
Read more

Prosecutors had argued the companies should be held responsible for sending a "tsunami" of prescription pain pills into the community.
Read more

As of July 4, there are 211 monkeypox cases in Quebec, 77 cases in Ontario, eight cases in Alberta and four cases in British...
Read more