Health experts say they agree with a Quebec government plan to substitute the Pfizer-BioNTech vaccine for the Moderna vaccine in order to more quickly give booster shots to long-term care residents.

On Tuesday, Quebec Health Minister Christian Dubé said the province is considering the substitution because shipment delays may make it impossible to give everyone who received a first dose of Moderna their second shot within the 112-day interval established by the province.

Dr. Sophie Zhang, who oversees 15 long-term care centres in Montreal, said some residents received their first dose more than 100 days ago and with the number of COVID-19 cases rising in the long-term care network, giving people a booster shot now is important.

“I would like to see them getting a second dose as quickly as possible and if that means using a different vaccine because there’s a shortage of Moderna, then I think that is the best option,” she said in an interview Wednesday.

“I would have preferred giving the Moderna to people who received Moderna, but if it’s not possible and they’re telling us that there’s going to be even more delays if we wait for Moderna, then I would be in favour of giving the Pfizer right away.”

Read more:
Why does the AstraZeneca COVID-19 vaccine age limit differ across provinces?

She said residents at the long-term care centres she oversees were scheduled to get their second dose on April 16, but that was cancelled because of the shortage of Moderna.

Eight new cases of COVID-19 were reported in Quebec’s long-term care system on Wednesday, bringing the number of active reported cases to 114.

“We do see a jump in the past few weeks, so there is cause to worry,” Zhang said. “There is a sense of urgency to get the second dose in.”

She said the second dose of the two-dose vaccine is particularly important for long-term care residents who tend to have weak immune systems and may not respond as well as younger people to the first dose of vaccine. She said variants — and the fact not all health-care workers have been vaccinated — are also contributing to infections in long-term care residents who have been vaccinated.

In one Montreal long-term care centre, two patients tested positive for COVID-19 after four workers were infected, she said.

Canada’s National Advisory Committee on Immunization and Quebec’s public health institute recommend the same vaccine be used for both doses, but they say if the vaccine used for the first dose isn’t available or unknown, the second dose should be a vaccine that uses the same technology.

Both the Moderna and Pfizer vaccines use mRNA technology, which is short for messenger RNA — a molecule similar to DNA. These vaccines use genetic information from the virus to teach the body’s immune system to build a defence to it.

“Based on expert opinion, it is more important to give that second dose within a reasonable time than wait for the right vaccine,” Dr. Caroline Quach-Thanh, chair of NACI, wrote in an email Wednesday. “I think that using Pfizer is reasonable. We already have all the infrastructure for surveillance of safety and effectiveness and thus, that will be important to follow.”

While there is no clinical data on giving people two different vaccines, Jorg Fritz, a microbiology and immunology professor at McGill University, said he doesn’t see why there would be any additional dangers involved. 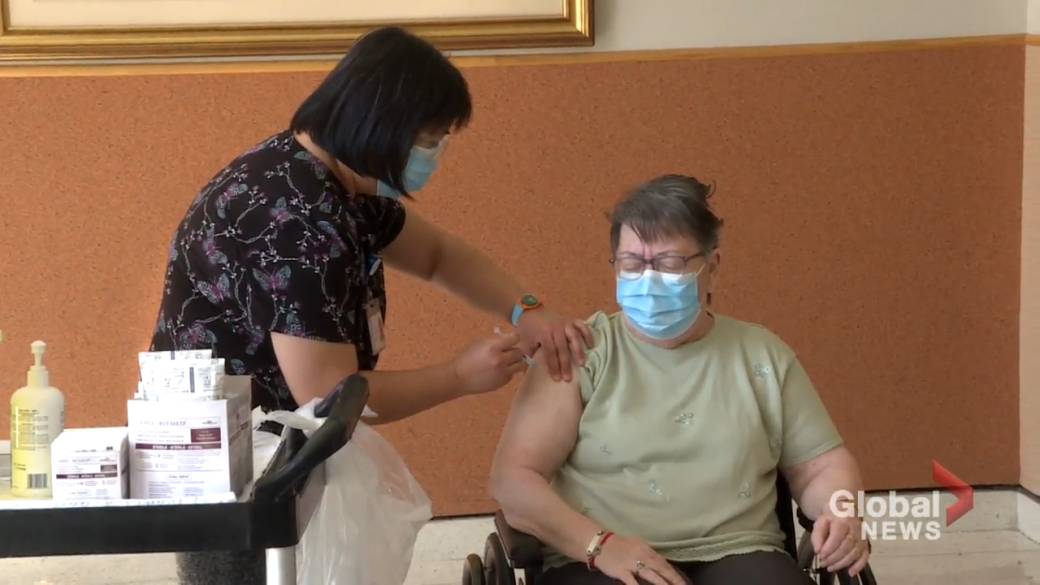 Fritz said he thinks it would also be better to mix two vaccines that use different technologies — such as an mRNA vaccine and a viral vector vaccine, like Oxford-AstraZeneca — than wait too long to give the second shot. A viral vector vaccine uses a modified version of another virus to deliver information to the cells in the body.

“I think it’s more important to get a booster vaccination to have a more robust and more durable immune response against the viral proteins than using the same technology,” he said in an interview Wednesday.

Earlier on Wednesday, lineups were reported at some walk-in vaccine sites in the province as Quebecers 45 and older became eligible to receive the AstraZeneca vaccine. It had previously been available to people 55 and over.

The Health Department said that as of 10 a.m. _ two hours after reservations opened _ 47,000 appointments had been made to receive the vaccine, not counting appointments in pharmacies.