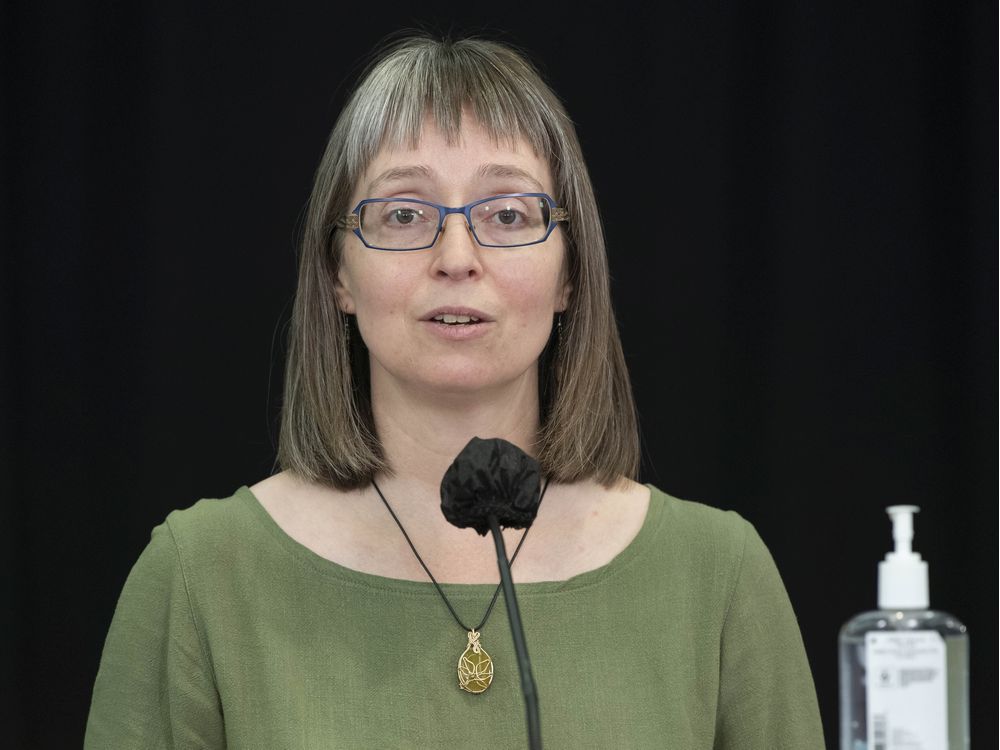 Chief Medical Officer Dr. Deena Hinshaw is scheduled to provide an update on COVID-19 in the province at a 3:30 p.m. press conference. She was absent from Wednesday’s reopening announcement because she had booked the day off as a personal day long in advance, Premier Jason Kenney said.

The province’s plan could see almost all COVID-19 restrictions – including the ban on indoor social gatherings and mask requirements – lifted by late June or early July as long as 70 per cent of Albertans 12 and older have received the first dose of the vaccine. As of Wednesday, the vaccination rate was 58.3 per cent.

The first stage will take effect June 1, two weeks after the vaccination rate hit 50 per cent and with COVID-19 hospitalizations below 800, and includes the reopening of patios and salons, the resumption of outdoor performance and recreational activities, and expanded caps on outdoor gatherings, weddings and funerals.

By mid-June, the government expects to be at the second stage, with 60 per cent of eligible Albertans vaccinated once and hospitalizations below 500 and declining. At that point, eased restrictions will allow 150 people to attend concerts and festivals. Cinemas and other indoor entertainment spaces can then reopen at one-third capacity, and indoor and outdoor sports can resume with no restrictions.

Based on booked vaccine appointments, the province could see all restrictions revoked as early as June 28, Kenney said. That would allow the Calgary Stampede to go on without limitations.

Some doctors have raised red flags about how quickly the province plans to revoke all restrictions, pointing out that two weeks ago Alberta had the highest rate of infection per capita in Canada.

But active infections have dropped significantly from the peak of more than 25,000 cases on May 9 to 10,953. Daily case counts continue to decrease, with 390 new infections reported Wednesday.

Hospitalizations have fallen, too, from nearly 700 just over a week ago to 548 including 157 in intensive care.

“The good news is that with the leading indicators coming down, with vaccine protection coming up, and with the tailwind of summer weather and favourable seasonal conditions, we can confidently expect to see the pressure on our hospitals continue to come down,” Kenney said.

Still, Alberta’s reopening plan is the most aggressive of all the provinces. NDP Leader Rachel Notley called on the UCP government to release the data the decisions were based on.

“I have questions about how the premier decided on this pace and whether it was informed by science, or simply by working backwards from the first day of the Calgary Stampede,” Notley said.

Kenney emphasized in an interview on CBC’s Edmonton AM Thursday morning that vaccines are the science.

At Wednesday’s presser, he said the province is being cautious by waiting between stages and is using other countries and American states as examples.

“To just maintain these measures indefinitely when we are beginning to approach population immunity while the COVID numbers are dropping very quickly, would I think be irresponsible,” he said.

“I think at some point people just even more broadly start to ignore rules.”

With files from Ashley Joannou and Dustin Cook