When it comes to accessing COVID-19 vaccines in Toronto, newly released data appears to reinforce how where you live can be a major difference-maker.

According to data collected by ICES (the Institute for Clinical Evaluative Sciences), a non-profit that collects Ontario health data to be used for public policy, between Dec. 14 and March 29 and broken down by postal code, the vaccination rates between certain neighbourhoods can be separated by as much as 400 per cent.

However, when it comes to confirmed COVID-19 case totals and hospitalizations, the data comparison paints a starker picture.

When it comes to the demographics of each area, the differences show two different stories.

According to a 2016 City of Toronto profile for the Moore Park and Rosedale neighbourhoods, the combined population was 20,923, the median household income is $106,740 and 24.1 per cent of the population was listed as 65 and older. As of March 29, approximately 77.1 per cent of residents 80 and older received at least one COVID-19 vaccine dose.

Read more:
What should be done with leftover vaccines at Ontario clinics? Experts push for a plan

The data compiled by ICES was primarily done so during the bulk of phase one of the Ontario government’s vaccine strategy, which prioritized front-line health-care workers, long-term care and retirement home residents and staff, Indigenous adults and chronic home care recipients.

Laura Rosella, a scientist with the IECS, told Global News she and others have been crunching the real-time statistics in an effort to help “change our response.” She said the group receives COVID-19 and vaccination data from a variety of health sources and categorizes that data based on where people live.

Rosella said two major things stood out to her after doing a high-level look at Toronto. She noted the city, as well as Peel Region, particularly saw higher incidences of COVID-19 with lower vaccination rates.

“The biggest thing is the magnitude of the variation (in cases and vaccinations),” she said, noting similar issues were observed in the United States.

“We just thought in Canada (with) the universal health care system we’re going to do this better, but we’re seeing the same story.

“We almost need to assume in advance there’s going to be disparities and instead of just rolling out a program, we have to think of how we’re going to put the extra effort in those places that need it most — like from the start as opposed to reacting.”

The second area of concern revolved around workplaces and ensuring workers are protected, emphasizing those settings are a “really, really critical” environment to promote and provide vaccinations. 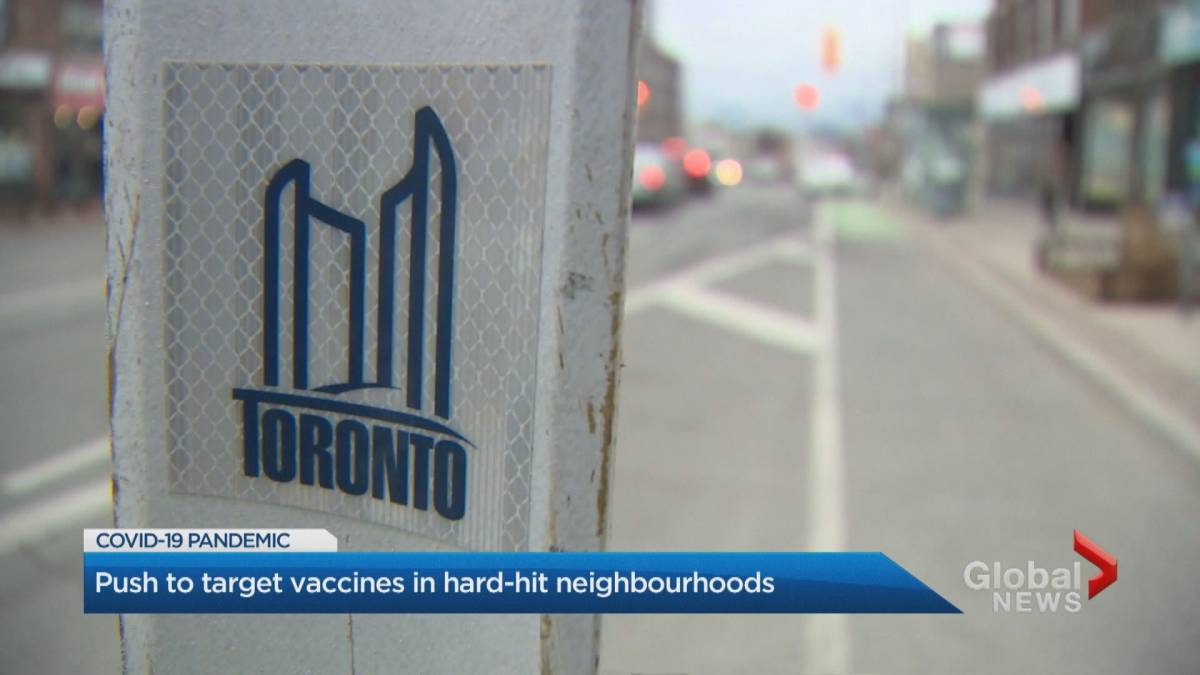 Rosella went on to say access issues such as troubles making appointments, vaccine hesitancy, lack of transportation, hours of operation for where vaccines are being distributed and community outreach are all factors in why there are variations in vaccinations.

“It’s hard to nail it down to one thing. There are many things … that are attributed to these differences,” she said.

“You can’t pick one. They’re all playing a role likely.”

“That difference… there’s no age or land use that would explain a difference that wide.”

Rosella said it has been great to see the Ontario government recently make moves to address the areas where cases are soaring, she said large variations in cases and hospitalizations have been seen throughout the pandemic.

“I think there are some structural factors in these areas and issues around paid sick leave and other issues that aren’t going to go away, and that’s always going to create a problem.”

Regions will be selected based on patterns of transmission, severe illness and mortality from COVID-19.

The provincial government reported 3,215 new cases of COVID-19 on Wednesday and 17 more deaths linked to the virus.

The above statistics are cumulative incidences between Dec. 14 and March 28.

Here is the Ontario government’s list of designated hot spot communities in Toronto based on COVID-19 cases and categorized by postal codes (the first three characters) as of April 6: