As the Ontario government moves to temporarily enact stronger powers for police officers to enforce emergency COVID-19 orders, community members, advocates and opposition politicians are raising concerns about the authority being given to randomly stop residents and demand identification.

Premier Doug Ford and members of his cabinet unveiled several measures that they said were in an effort to combat record-high COVID-19 cases and the vast spread of variants of concern.

The latest restrictions will see distribution centres, warehouses and manufacturing plants remain open while outdoor gatherings will be restricted to members of the same household. However, people who live alone can join another household.

Also, all recreational facilities such as sports fields, playgrounds and golf courses will be closed.

In addition, essential retailers will have to further lower capacity limits to 25 per cent, indoor religious services will be limited to 10 people, and non-essential construction will have to shut down.

Border checks are also set to go up at the Quebec and Manitoba borders as of April 19. Visitors will be prohibited from entering and exiting Ontario with the exception of essential purposes such as work, medical care and the transportation of goods.

But included in the suite of measures was a regulation to amend the province’s emergency orders to temporarily increase powers given to officers, something officials said was done to “increase public compliance” with public health measures. The powers were slated to last as long as the stay-at-home order is in place and can only apply to the provisions of the order.

As of 12:01 a.m. on April 17, police officers and those designated as provincial offences officers will be able to stop vehicles to ask those inside why they left their homes. People will also be required, if asked by officers, to show proof of their home address and the reason why they aren’t there.

“The reality is there are few options left.”

After Friday’s announcement, the Canadian Civil Liberties Association (CCLA) called it the “Black Friday of rights slashing.” The CCLA said granting police the authority to stop and question anyone at random risks a “rash of racial profiling.”

“Random police stops during COVID are unconstitutional, presuming those outdoors or driving to be guilty,” Michael Bryant, who heads up the CCLA, said.

Desmond Cole, a Toronto-based journalist, activist and author of The Skin We’re In: A Year of Black Resistance and Power, has been a longtime advocate against the ability for police to randomly stop people and the ability for them to produce identification, encouraging people to intervene and question when it happens.

When asked about Friday’s announcement, he called it “terrifying” and said it involves “draconian fines and measures in response to a health issue.”

“It’s scary to think how easily this can simply be announced and the complete wiping away … you’re kind of gradually promoting the culture where that becomes normal, where we are to obey,” Cole told Global News.

“All of these policing measures are a way of saying it’s not the government’s fault, it’s the individual’s fault.”

He said he believes the new orders will mean officers will be in the neighbourhoods with the highest number of cases, and areas where there are an increased number of people from marginalized, vulnerable and racialized populations.

Cole said any money spent on police enforcement would be better spend on increasing social supports and providing paid sick leave provisions at a provincial level, something many medical experts and advocates have been calling for over several months. 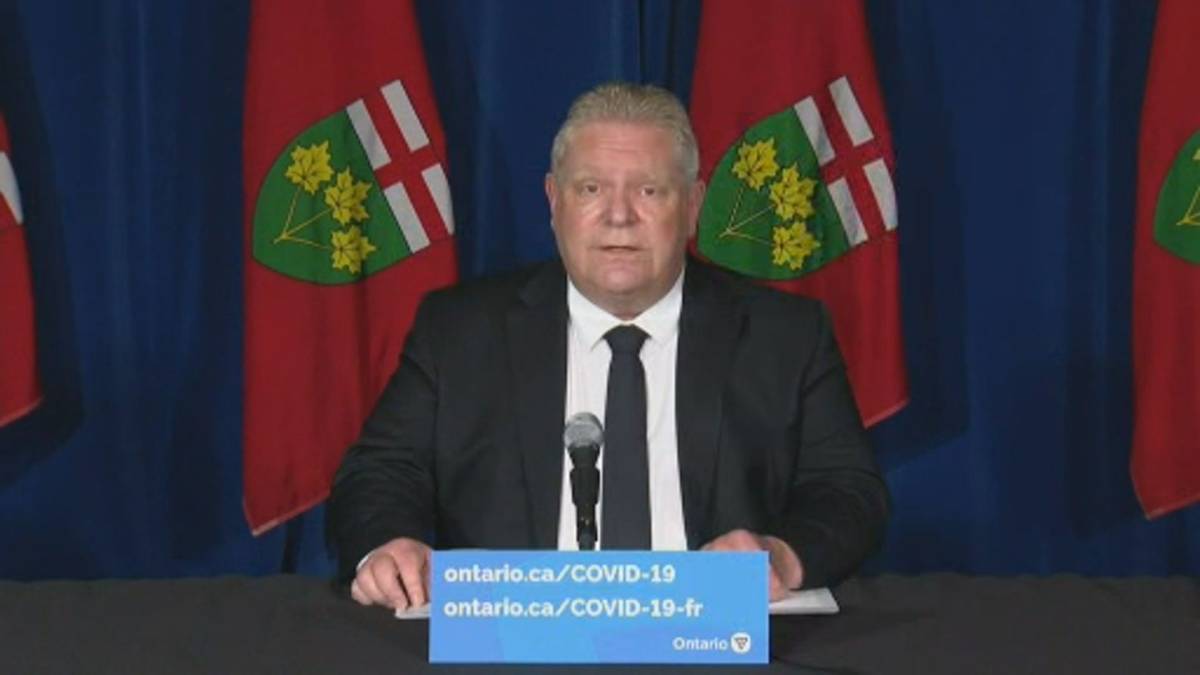 2:34
Ontario to set up border checkpoints, beef up police powers

Sam Tecle, an assistant professor at the University of Toronto and member of Jane-Finch Action Against Poverty, said racialized communities in the city are already on edge about police presence and that there is “hyper-policing” in some neighbourhoods, including Jane and Finch.

“That danger and that risk just got magnified 100 times by the expansion of police powers in the province. I am literally terrified thinking about what we might need to do as a community to keep each other safe,” he told Global News.

Tecle said the Jane and Finch neighbourhood, for instance, is going to have a pop-up vaccination clinic over the weekend. He said he is worried about community members travelling to the site being stopped and questioned by police.

“What if folks are walking towards the vaccination site — are they going to be stopped? Asked their address? Profiled? Carded? Will they be safe? These interactions are not safe,” he said.

Tecle noted the neighbourhood is home to a significant number of front-line workers and that these concerns are an added toll on the mental health of area residents.

Meanwhile, Cole called on opposition parties and other politicians who opposed carding in the past to speak out on the new policing measures.

“Black, Indigenous and racialized people are more likely to get COVID-19 in Ontario. They’re also more likely to be an essential worker — the folks who care for our sick and elderly loved ones, stock grocery store shelves, and keep factories running. Instead of giving them the help they desperately need to stay healthy, Doug Ford chose to police and punish them,” Laura Mae Lindo, the Ontario NDP critic for anti-racism and chair of the party’s Black caucus, told Global News in a statement Friday night, echoing calls for a provincial sick days program.

“People need vaccines, not police pulling them over again and again. The Ontario NDP has long opposed carding and demanded that all information collected through the practice be destroyed.

“We find Mr. Ford’s new endorsement of carding chilling. It will lead to discrimination, as it always has, and no experts have suggested it could help stop COVID-19.”

“I can’t believe (Premier Doug) Ford is calling carding a public health measure while refusing paid sick days,” he said in a statement.

“There are so many things he could have done that would have been helpful for curbing the spread of COVID-19 without being harmful to the racialized Ontarians hit hardest by this pandemic. Instead he chose carding, which has been proven as an inequitable and dangerous practice for racialized people.

The new measures came just hours after Ontario’s science advisers warned that the province’s COVID-19 infections could soar past 15,000 cases per day by June without tougher restrictions.

The dire predictions came after the government pleaded with other provinces to send in nurses and health workers as its hospital system was pushed to the brink.

“Our progress is both frustrating and frightening,” Dr. Adalsteinn Brown, co-chair of Ontario’s science advisory panel, said in presenting the latest projections.

Ontario reported 4,812 new cases — another record — on Friday, up from Thursday’s record of 4,736. It also reported 25 more deaths related to the virus.

Hospitals were “bursting at the seams” and care was already being compromised, Brown said as his group urged Ford to order everyone to stay home for six weeks, and ramp up vaccinations as the only way to gain some control of the pandemic.

Data modellers said the only way to flatten the surge of COVID-19 cases and hospitalizations is a six-week stay-at-home order and for at least 100,000 doses of vaccine administered a day.

Officials also noted under every scenario, more vaccinations mean a faster resolution to the COVID-19 crisis in the long run.

Here’s how several police services are responding to the order

A Toronto police spokesperson said the service was reviewing the new regulations.

“The provincial government announced stricter measures today to stop the spread of COVID-19 which includes new, temporary powers for police officers in all services across Ontario,” a service spokesperson said in an email.

“Prior to any change in our enforcement strategy, we will notify the public on how we plan to implement the new provincial orders.”

The Ontario Association of Chiefs of Police said officers will do their part to enforce stay-at-home orders and new enforcement measures.

“Our police officers will use their discretion in using such measures,” the association said in a release.

The Waterloo Regional Police Service said it will review the new regulations, but in the meantime, it will focus on speaking to people to educate them. It said enforcement will be a last resort.

“We will not be conducting random vehicle or individual stops. As before, our initiatives will be both complaint-driven or proactive, with the goal of gaining compliance,” the service said in a release.

“Those that refuse to comply will receive the appropriate penalty.”

— With files from The Canadian Press and Alanna Rizza