A Peel Regional Police spokesperson says the service is looking into the conduct of an officer who accused a Global News journalist of “agitating” protesters by filming those in attendance who are pushing for a Mississauga gym to reopen as well as hugging and posing for photos.

Sean O’Shea, a consumer and investigative reporter with Global Toronto, was at Huf Gym near Cawthra Road and Dundas Street East on Friday to report on continuing protests by the facility’s owners, employees, customers and supporters over the Ontario government’s current COVID-19 restrictions that have temporarily ordered gyms closed.

Earlier in the week, O’Shea reported on how Huf Gym reopened for patrons despite the province seeing record-high cases.

Outside the facility Friday morning, O’Shea was by himself filming several protesters standing in front of the gym on his cellphone. In a video posted on Twitter, a woman wearing a sweater with the words “hugs over masks” could be seen aggressively walking toward O’Shea, loudly shouting and waving her finger.

As the woman turned around to walk away, O’Shea walked forward and began speaking with a Peel police officer at the scene.

“Is this OK with you sergeant? Do you condone that sergeant?” he asked the officer.

“I don’t condone it that’s why I started to come over. Um, you’re standing here videotaping and obviously you’re agitating this group,” the officer replied.

O’Shea went on to capture the same officer, who wasn’t wearing a mask, hugging and standing with some of those in attendance who also weren’t wearing masks. The officer posed for photos.

EXCLUSIVE Uniformed Peel Police sergeant is all hugs with supporters of HUF gym before and after one of their group members pursued me. No masks. He offers me a hug, too. I decline. City ordered gym closed; they refuse. @PeelPolice @globalnews #Mississauga pic.twitter.com/B5qqvQasRg

“Jeez, just terrible, eh, Sean? What are we going to do with guys like this who want people to be able to feed their kids for the next 20 years right?” a protester said as the officer hugged someone at the scene.

As O’Shea was filming, some of those in attendance held up signs saying “We are all essential” in an apparent effort to block his view.

“That’s evil what you’re trying to do,” someone said.

“You’re going out of your way to try and destroy someone. That’s communism and fascism,” another person could be heard saying as the officer continued to hug others and appeared to pose for photos. 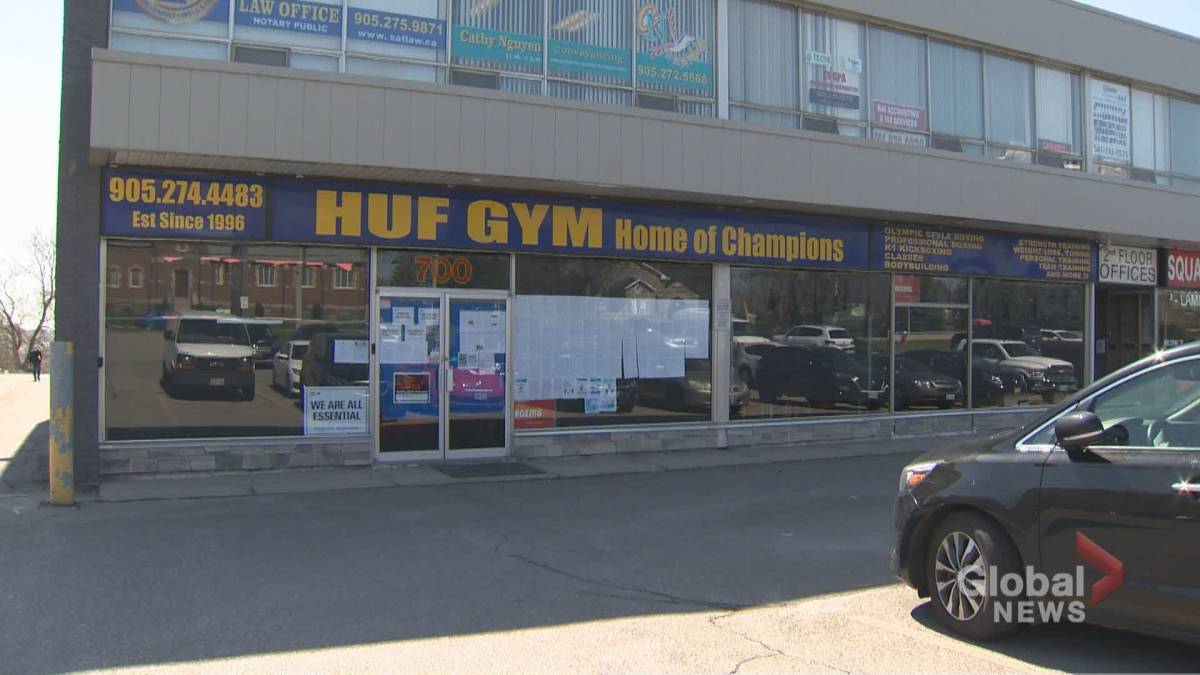 Global News contacted the Peel Regional Police service to ask for comments on the officer’s response at the protest. A spokesperson said the matter was being looked into, but couldn’t offer further comment.

Friday’s developments came three days after Teresa Heron, an owner of the gym, announced she would start seeing clients. On Wednesday, Mississauga Mayor Bonnie Crombie was asked about the decision for the gym to reopen.

“We don’t have a lot of tolerance for this. We’re going to give them the maximum fine,” she said during a news conference.

Global News previously observed several City of Mississauga enforcement officers at the facility as the gym’s clients came and went through the gym’s front and rear doors unimpeded.

Heron previously told Global News she would not grant voluntary access to the gym and that a warrant would be necessary. On Thursday, Peel Regional Police officers arrived at the plaza and a spokesperson told Global News they would not be entering the facility under a warrant.

Chris Giles, the manager of compliance and licensing for the City of Mississauga, told Global News charges were expected to be laid under the Reopening Ontario Act.

Heron was asked if she intended to stay open despite Crombie’s warning.

“I am,” she said in response while rejecting Crombie’s comments.

“Then they need to do that … we continue to operate.”

Global News contacted Crombie’s office to ask for comment on Friday’s incident, but a response wasn’t received by the time of publication.

Jay Heron, who is a co-owner of the gym, said the facilities need to remain open for residents during the pandemic.

Darren John, who told Global News he’s been an 18-year employee of the gym, said he disagreed with requiring fitness facilities to be closed now.

“I don’t think it should be shut down while they’re leaving alcohol stores open, ice cream shops open, weed shops open,” he said.

For months gyms and fitness facilities have been heavily impacted by restrictions that have seen closures ordered or have had heavy restrictions imposed.

Cited as an increased transmission risk, high-impact activity also leads to heavier breathing, which means droplets are being expelled from peoples’ mouths at an accelerated rate — and being propelled further distances.