The P.1 variant, which was first discovered in Brazil, is raising global concerns about the possibility of reinfection while highlighting the importance of limiting further opportunities for the coronavirus to mutate.

Doctors Without Borders field co-ordinator Fabio Biolchini says “everybody should be focused on Brazil right now,” and particularly, on the city of Manaus, where he’s been since mid-January.

“People here thought that they were immune and that the worst had passed,” he told Global News.

“There is absolutely no reason to think that this could not happen anywhere in the world.”

A report first made public in the American Association for the Advancement of Science on Dec. 8, 2020 suggested that as much as 76 per cent of the population of Manaus, Brazil had been infected with the coronavirus by October 2020.

“There was this collective thinking that everybody was immune. And it has proved wrong very badly.”

Biolchini says there is not yet any conclusive research but “what we have seen here at the field level is clearly a lot of cases of re-infection.”

Ali Mokdad, chief strategy officer for population health with the Institute for Health Metrics and Evaluation (IHME) at the University of Washington, agrees.

“We’re seeing no cross-immunity from previous infections and therefore we’re seeing a peak right now in Brazil and it’s spreading all over.”

Of the 26 states and one federal district in the country, Biolchini says 17 reported 100 per cent intensive care unit occupancy as of Wednesday. In Manaus, he says ICU occupancy has fallen to 86 per cent from over 150 per cent four weeks ago.

“Saying that it has improved is a little bit optimistic. I would say, it’s less worse than before,” says Biolchini.

ICU occupancy is down to 86 per cent from over 150 per cent in Manaus, Brazil, according to a field co-ordinator with Doctors Without Borders. Fabio Biolchini

Mokdad says the situation in Brazil is particularly alarming because it occurred when the southern hemisphere was experiencing its summer.

“That surge that’s going on right now, it’s happening during their summer or towards the end of their summer, where you would expect they would have a better handle on the spread of the virus. And we are not seeing it,” he said.

“That’s what makes it even more dangerous because they’re going to enter into their winter and we know this virus is seasonal and it will increase in winter.”

The surge has proved taxing for already overworked health-care staff.

Biolchini says as case counts finally began to fall, the demand for Doctors Without Borders’ mental health supports has climbed.

“It’s like a war zone. You have to adapt. You have to do whatever you can. You have to work with limited resources. You do the best that you can, but it’s very, very stressful for all the medical personnel, everybody working in these conditions,” he says.

“The worst nightmare for a medical doctor is to have to choose patients and to allocate resources when there is not (enough for) everyone.”

One hospital normally had 20 beds, Biolchini explained, but had almost 50 patients when he arrived in mid-January.

“All of them COVID, and many of them dying all the time. And as soon as they died, another one replacing the bed.” 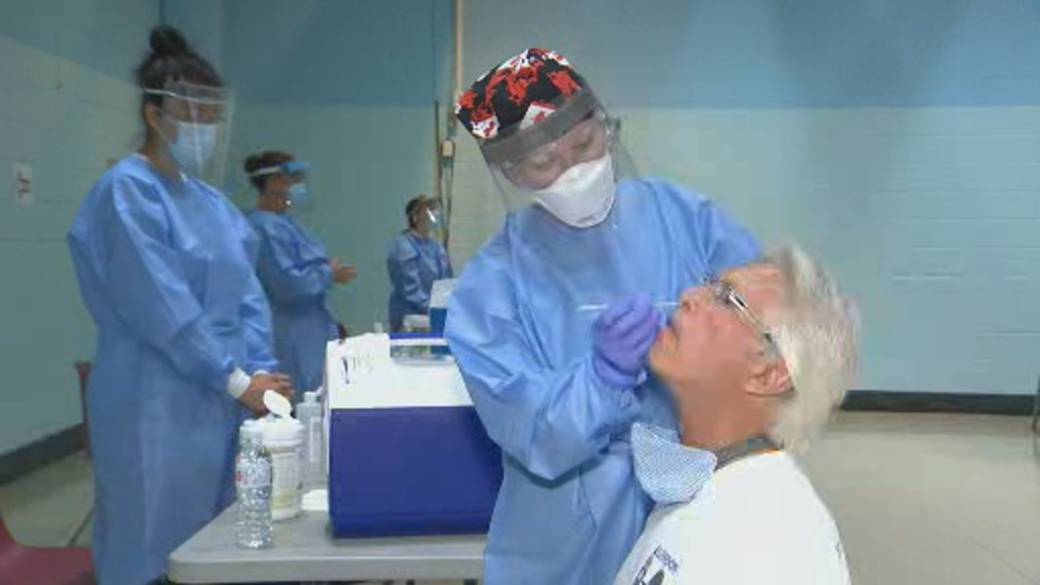 3:13Concerns about third wave and getting back to normal

Concerns about third wave and getting back to normal

Mokdad says the lesson for everyone is to stay vigilant.

“What’s good for many countries right now is the vaccines are available and we’re rolling them as fast as we can,” he told Global News.

“The problem that we will face at one point of time even if the United States and Canada, all the rich countries, we have vaccinated a large percentage of the population, we still are not safe because this virus could be circulating somewhere else, can produce a new variant that will come back here and we start all over again.”

As of March 4, three cases of the P.1 variant had been confirmed in Canada, all in Ontario.

The only way to avoid that situation, Mokdad says, is to wear a mask, practise physical distancing and get the vaccine “when your time comes, irrespective of what vaccine is provided to you.”

On Friday, Health Canada announced that it had approved the Johnson & Johnson/Janssen single-dose vaccine. The vaccine is the fourth official shot to get Health Canada’s seal of approval — joining Pfizer-BioNTech, Moderna and AstraZeneca — potentially enabling more Canadians to be vaccinated in the coming months.

Still, Mokdad believes the coronavirus will stay with us well beyond the end of the pandemic.

“My assumption — and I hope not — is let’s prepare for having this virus like a seasonal virus every year. And the only way to limit mortality out of it is basically to stay ahead of it in terms of vaccines. Like flu, we change the vaccine every year. We may have to do this for COVID-19.”

— with files from Global News’ Rachael D’Amore and Crystal Goomansingh.

Previous articleJohnson & Johnson vaccine approved in Canada. How does it compare to the others?
Next articleAlberta restores authority for community peace officers to enforce COVID-19 orders after calls from municipalities