I’m a glass half full type of Edmonton Oilers fan, prone to over-estimating the team and over-valuing various Oilers players. But I have to admit I’d never really taken seriously the talk of Nurse being a Norris Trophy candidate in 2021, not until yesterday when I saw a report from NHL.com, then dug into some related statistics.

The report saw five writers from NHL.com vote on the best d-man in each of the league’s four divisions. These weren’t Edmonton homers voting. They weren’t Oilers fans, bloggers or media on Team Nurse rooting for the home town hero to get his due.

Nonetheless, they picked Nurse unanimously as the top d-man in the North Division.

The other divisional leaders were Victor Hedman, Shea Theodore and Adam Fox, with only Hedman and Nurse being unanimous winners.

Honestly, I would have expected Jeff Petry to win the vote in the North, given the amount of hype around him. But Nurse was the easy winner. The NHL writers saw him as the best in The Canadian, and it wasn’t close.

This came as a surprise. For years now, a small but loud faction of Oilers fans have doubted Nurse’s talents. I never saw myself as part of this group. In November 2016, I said he and Oscar Klefbom had the best chance of emerging as real No. 1 d-men, repeated this claim with more certainty in regards to Nurse in March, 2017, then predicted before this season in December 2020 that Nurse would step up in Klefbom’s absence and be the No. 1 d-man the Oilers need.

All these predictions have now proven out. But earlier this year talk started among some Edmonton fans that Nurse had gone beyond mere No. 1 d-man status and was now a candidate for the Norris Trophy.

I never believed it, but I had to admit that I did not watch the top d-men in the other NHL divisions. I could not have any real sense of where Nurse ranked among them.

It’s difficult to rate d-men with statistics alone, mainly because they are in large part defensive specialists and there are no stats available to the public that fairly and accurately measure defensive prowess. The only one I trust to any great extent is to look at how much time their coaches trust each d-man to play on the penalty kill, but that’s a crude proxy, and  it’s silent as to how effective a d-man is on the kill.

I’m not here to say this is a perfect or even reasonable way to rate Norris Trophy candidates. That said, this method passed the smell test better than any other statistical method I could concoct, including using on-ice numbers like Corsi, Fenwick and Expected Goals For.

By using these numbers alone, with no human judgement involved, it gave me a Top 31 list of d-men that included almost all the NHL’s best d-men and didn’t include any names that seemed way out of place.

To my astonishment when I used the same set of stats for this 2021 season, Nurse ranked second overall only to Hedman. 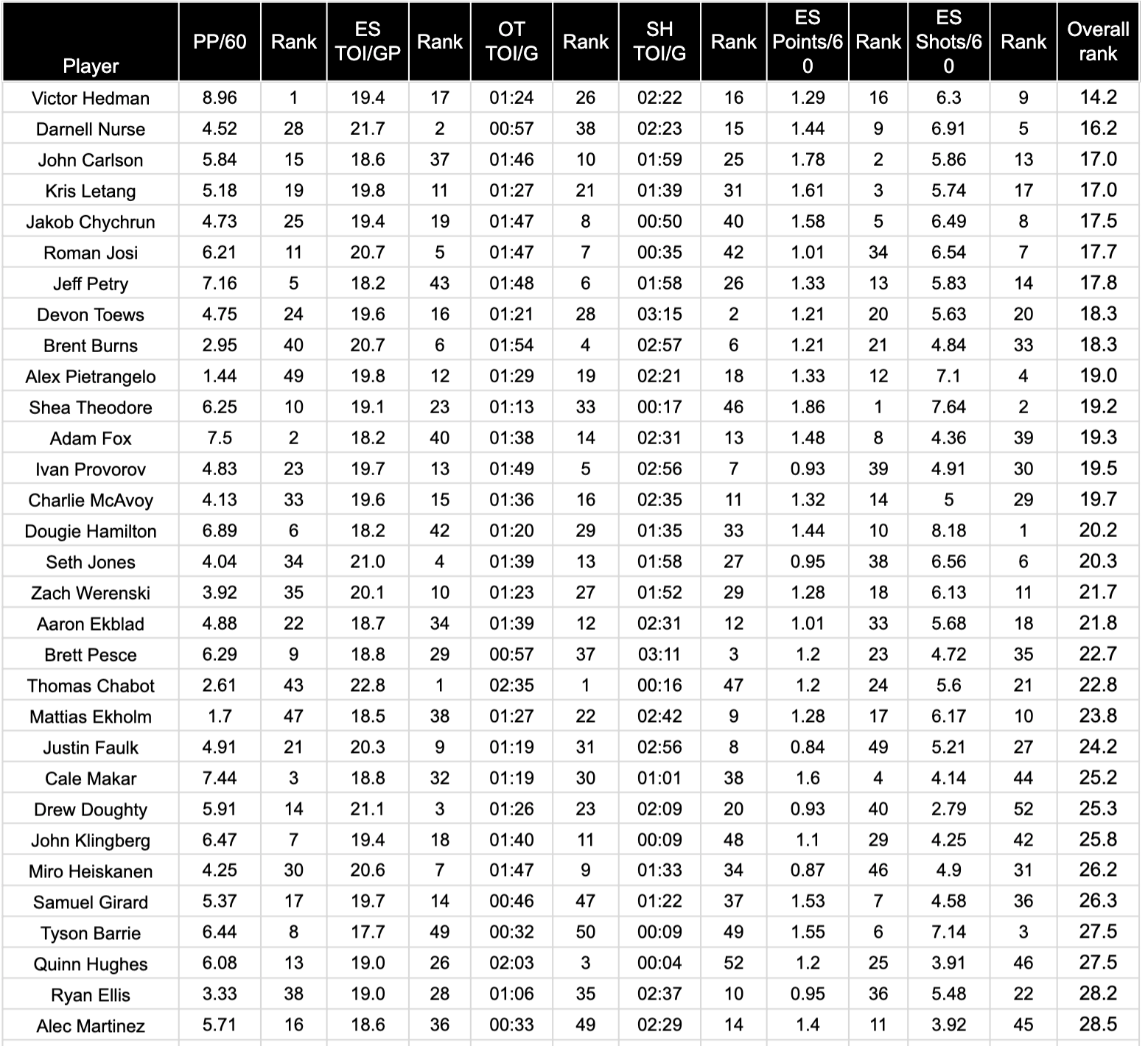 It’s fair to say that if you rate d-men by the numbers, Darnell Nurse is near the very top of NHL d-men. By the numbers, he’s a solid Norris Trophy candidate, easily the best contender from The Canadian.

My own take? If I was given truth serum, I’d argue that at even strength Adam Larsson has been as effective as Nurse this year. But when you factor in Nurse’s heavier usage, his physical prowess, his confidence with the puck, his decent power play ability, I’d rate him overall as the best d-man on the Oilers.

And looking at these numbers, there’s no doubt there’s a solid statistical case to be made for Nurse as a Norris Trophy candidate.

STAPLES: Ryan McLeod to make NHL debut in the ‘peg