Edmonton Oilers are losing but not making any big line-up changes? Hmmm

The Edmonton Oilers are losing but not making any big line-up changes, at least if we go by the lines and defence pairings at Friday’s practice.

Reid Wilkins of CHED radio reports: “Looks like only change from last night on top 4 lines is Ennis in for Nygard with Shore and Archibald on fourth line… (New goalie) Troy Grosenick making Oilers practice debut today. Skinner at the other end, looks like Koskinen gets a rest today.” 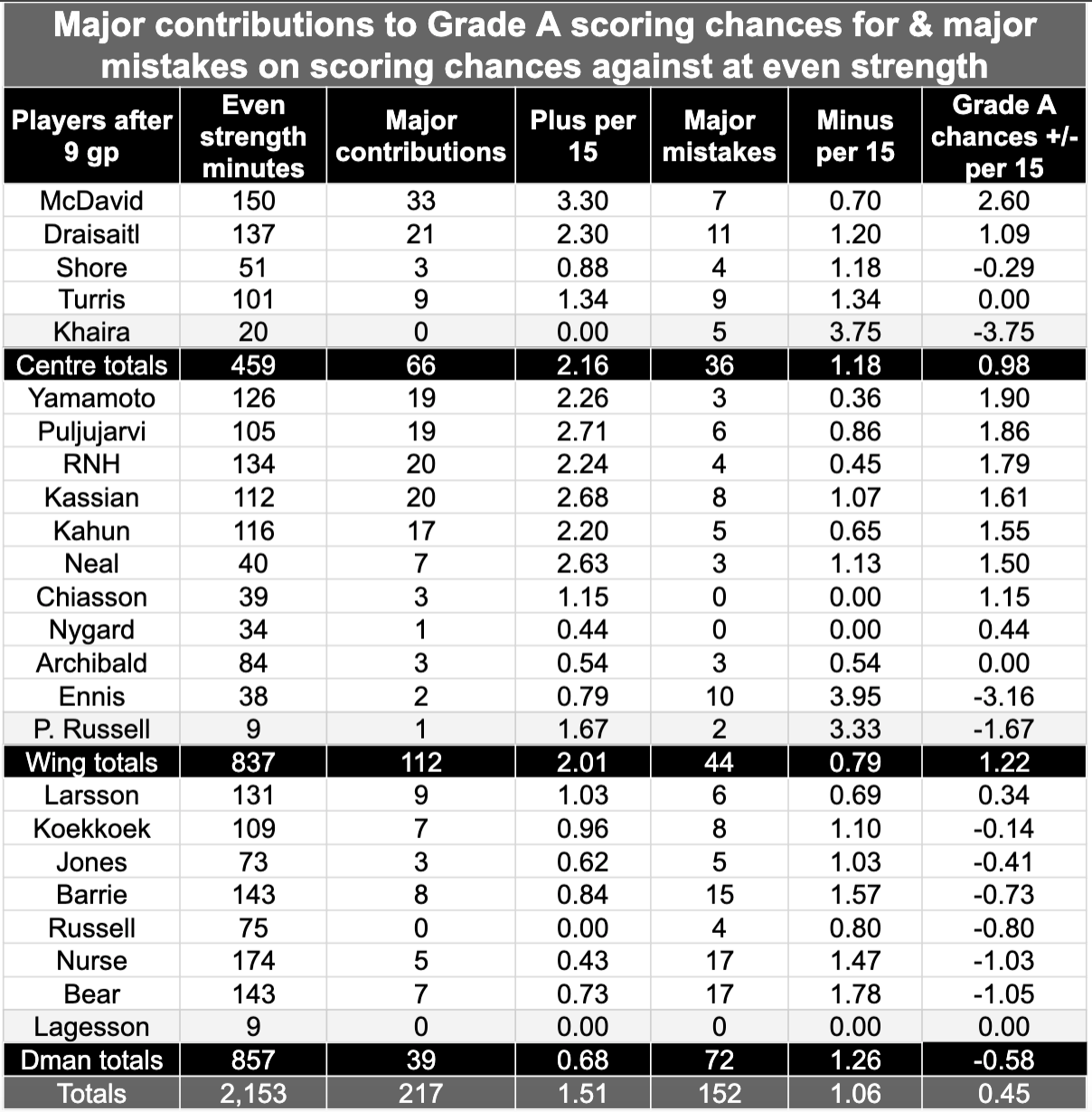 1. Should Oilers coach Dave Tippett do more to mix up things? On the one hand, the team has just three wins this year in nine games to go with six regulation time losses. That’s a fast road to hockey hell in the NHL.

2. On the other hand, when it comes to Grade A scoring chances, the Oilers have mustered 118 while giving up only 100. In most games, they’re getting more Grade A chances than their opponents, which indicates Edmonton is a decent-to-good team that has so far suffered from bad luck, along with superior opposition goaltending.

3. But back on the other hand, since Tippett broke up the Dynamite Line of Ryan Nugent-Hopkins, Leon Draisaitl and Kailer Yamamoto for good last March — a unit that had a goal differential of 30 goals for and just nine against — the team has four wins and 10 losses. Correlation or causation? I’m going with causation to a large extent and would reunite the NHL’s top line at once. I’m not seeing any real chemistry on the top two lines so what will it hurt?

4. I don’t know why Tippett also doesn’t go with a fourth line of Josh Archibald, Devin Shore and Alex Chiasson. The only time we’ve seen a fourth line that worked was when these three were together against the Leafs. Why not go back to Chiasson on this line? Is he hurt? What’s up?

5. The third line of Kyle Turris, Zack Kassian and James Neal has looked OK as well, so if Tippett were to go with these new lines, he’d be using three lines that have worked in the past, and taking a chance on a Connor McDavid, Dominik Kahun and Jesse Puljujarvi line. Given the lack of real chemistry between McDavid and RNH, I don’t see why you’d keep them together and not go with some other trios. But maybe I’m unaware of some key facts or knowledge here. I’m just a fan speculating, not the coach, so don’t have that crucial insider info.

6. Why not move in Evan Bouchard and move out Tyson Barrie for a game? It’s not like Barrie has chewed up his scenes. He’s been OK at even strength, OK on the power play. Why not see if Bouchard is ready?

McCURDY: Player grades in tight game, but still a loss to Leafs

STAPLES: Who should Oilers play with McDavid? Kassian and Ennis obviously

STAPLES: Adam Larsson re-emerging as a top defender for Oilers

Previous articlePlayer grades: Oilers come back twice, but penalty kill can't get the job done in 4-3 loss to Leafs
Next articleEdmonton Oilers making liberal use of taxi squad to bolster their struggling bottom six