This in from Jack Michaels, play by play man for the Edmonton Oilers, his best guess at what Edmonton’s line-up will be for tonight’s game against the Calgary Flames:

“My eyes & ears in CGY project the following for tonight:

1. If Michael’s assessment is correct and Turris is coming out, I doubt any Oilers fan or observer will object. Turris has struggled immensely this year, especially on defence. First he was demoted from the PK unit, then demoted from third line to fourth line, then moved to the wing, and now taken right out of the line-up, mainly because he struggles to cover off the defensive slot. My most excellent Cult of Hockey colleague Bruce McCurdy dug into Turris’ woes in this recent post.

3. It’s the second line led by Leon Draisaitl that is struggling to generate dangerous shots on the attack. Last season, Draisaitl had 96 Grade A scoring chance shots on net at even strength in 71 games. This year he has just five in 18 games. In total, he’s gone from generating 2.1 Grade A shots on net per game last year to just 1.2 per game this year, with all the decline coming because he’s simply not finding a way to get that many dangerous shots on net at even strength. My own theory is that he lacks a set-up man, the kind of he had last year in McDavid at first, then Ryan Nugent-Hopkins. Perhaps Tyler Ennis, who has taken over from Dominik Kahun on the second line, will be that set-up man.

4. Getting back to Turris, he was signed to replace Riley Sheahan, but it’s evident the Oilers would have been better off sticking with Sheahan. Turris is providing about the same amount of offence as Sheahan did (not very much at all), but his defensive play isn’t close to what Sheahan brought. In any case, with Jujhar Khaira playing his best hockey in a few seasons and Gaetan Haas looking like a solid depth centre, the Oilers can get by if Turris can’t crank up his level of play. It’s also the case that top prospect centre Dylan Holloway might be joining the Oilers after his college season is over, and that may well provide a boost to Edmonton’s centre depth at that time. Holloway has the size and speed to play the pro game, though he may be best off on the wing at first.

5. If we go by the passes, shots and battles won by Draisaitl on Grade A chances, we see he’s also dropped off from last year, 4.7 per game to 4.1 per game, while McDavid has shot up from 5.1 per game to 6.5 per game. McDavid has never been better on both offence and defence, while Draisaitl is struggling somewhat at even strength, at least by the lofty standard he set last year. Again, putting a set up man on his line would help, with Ryan Nugent-Hopkins being the obvious choice. At this point, given Puljujarvi’s improved play, a top line of Ennis/Kahun, McDavid and Puljujarvi might work well. 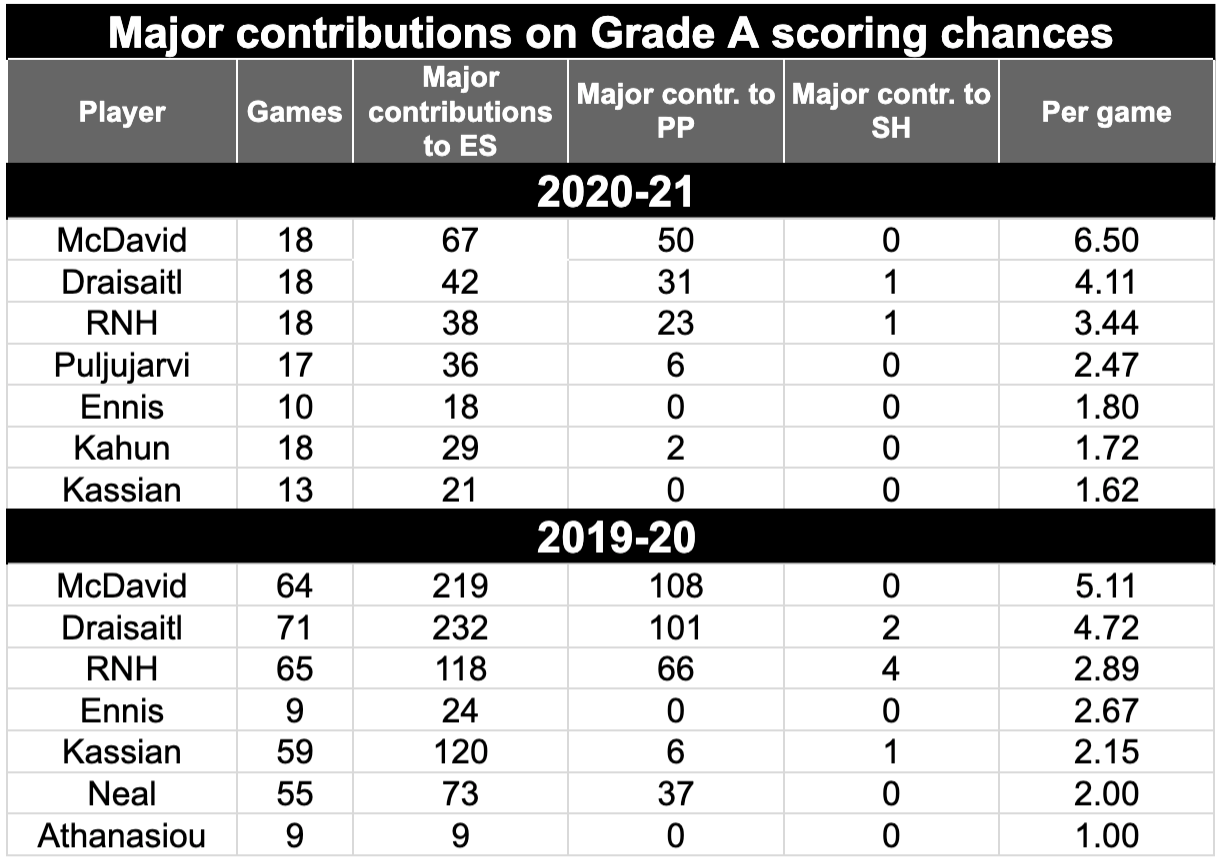 Previous articleEdmonton father who killed babies given life sentence, no chance of parole for 17 years
Next articleEdmonton man dies after falling while ice climbing at Jasper National Park