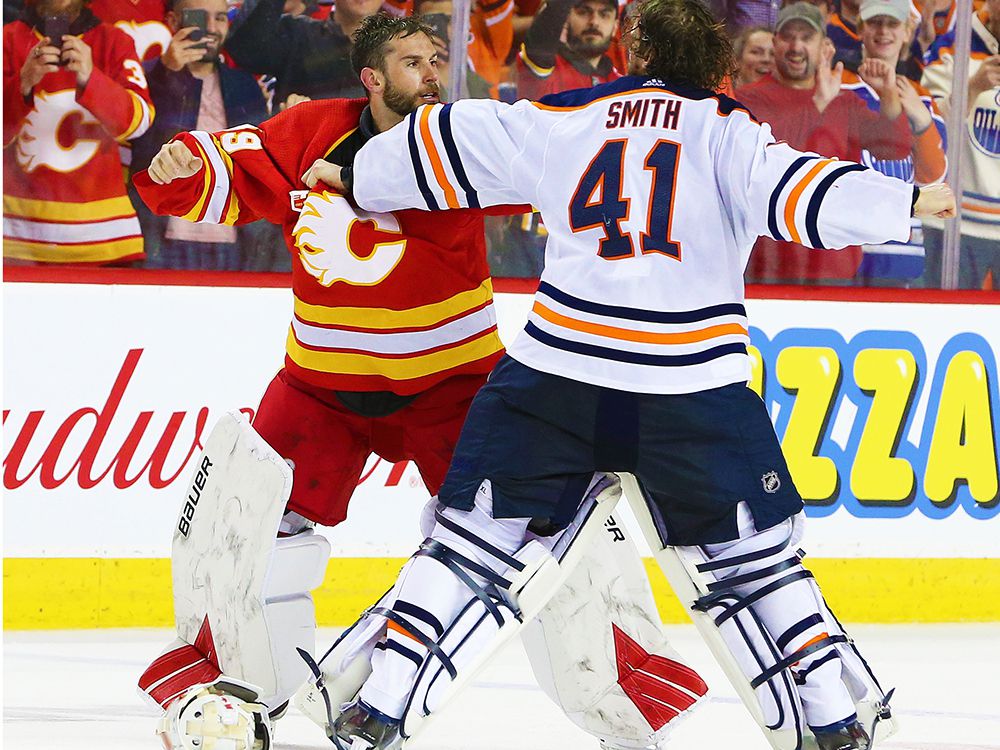 This in from Mark Spector of Sportsnet on Twitter, news that the Edmonton Oilers have put goalie Troy Grosenick on waivers, in anticipation of bringing goalie Mike Smith back onto the active roster:

“Troy Grosenick has been placed on waivers by EDM. Mike Smith must be close to returning.”

1.  It’s good to have Mike Smith back but I’m not sure why the Oilers have waived Troy Grosenick and now risk losing him to a waiver claim. Edmonton needs a veteran third-string goalie and they already lost one such player, Anton Forsberg, on waivers earlier this year. Why not waive some other player who won’t be in the line-up against Calgary? Why not waive James Neal, Alex Chiasson or Kyle Turris, neither of whom stands any real chance of being claimed on waivers (due to their contracts)? I don’t get it. The safe bet would have been to continue to carry three goalies on the team’s 23 man active NHL roster.

2. I do understand why the Oilers don’t want to waive d-men Willam Lagesson or Slater Koekkoek. It’s excellent to have defensive depth, and if you waive either one of Lagesson or Koekkoek there’s a decent chance they will be claimed, given the at least average ability of both players and their low-by-NHL-standard salaries. Lagesson, especially, has come on strong in recent games, playing in a shut-down role with Adam Larsson as his partner.

3. Stuart Skinner won his only game for the Oilers, but it was in a game that Edmonton dominated against Ottawa, and he had a few iffy moments. Skinner remains a solid prospect but he’s not even established himself at the AHL level. Counting on him to be your go-to player in case Koskinen or Smith gets hurt is a major mistake. Goalie is the one position where a team can’t have a sub-standard performance and expect to win. They got away with one in Skinner’s first start but can’t count on that to happen again.

4. My bottom line here? The Oilers have solid depth on defence and on the wing, but not in net. They should have used their active roster to protect whatever goalie depth they have, and that might have meant waiving a depth d-man down the road, most likely one of William Lagesson or Slater Koekkoek, since Kris Russell’s No-Movement Clause prevents him from being waived. That’s not a happy prospect, I know, but it’s better than having a huge question mark in net.

5. Remember this, that when your third-string goalie goes into the game, it’s not like he’s a depth d-man or depth forward, playing easier and lesser minutes. No, he’s your No. 1 goalie, likely the most important player on the ice, going against the toughest competition the opponent has to offer. For that reason, goalie depth is crucial.

Previous articleUnlocking Jesse Puljujarvi: Some thought he was “dumb” but he's a big-hearted guy and a balanced player, his agent says
Next articleThree to See Saturday: Deep Freeze skating, Latitude 53 mending and The Hand