Edmonton Oilers move on from sniper prospect in Czech League. But why?

This in from Capfriendly, news that the Edmonton Oilers haven’t signed prospect Matej Blumel and he’s now an unrestricted free agent: “We’ve been asked to clarify Matej Blümel’s signing rights as they relate to the Oilers. He was drafted out of the USHL, as a North American draftee, the club had two years to sign him. Those rights expired on June 1, 2021. The #Oilers no longer hold his rights.”

On Oilers Now, host Bob Stauffer said that Blumel had been scheduled to go to college hockey after his USHL days, and that would have delayed his development process, essentially giving the Oilers more time to assess him. Instead Blumel went to the Czech league for two years. “The Oilers had to decide whether or not they were going to sign him because he’s playing pro and they elected not to sign him… You can call it a miss on a fourth round pick. That might be a fair assessment. Others might say, ‘Well, that’s the cost of doing business, taking a swing at a player in that slot.’” 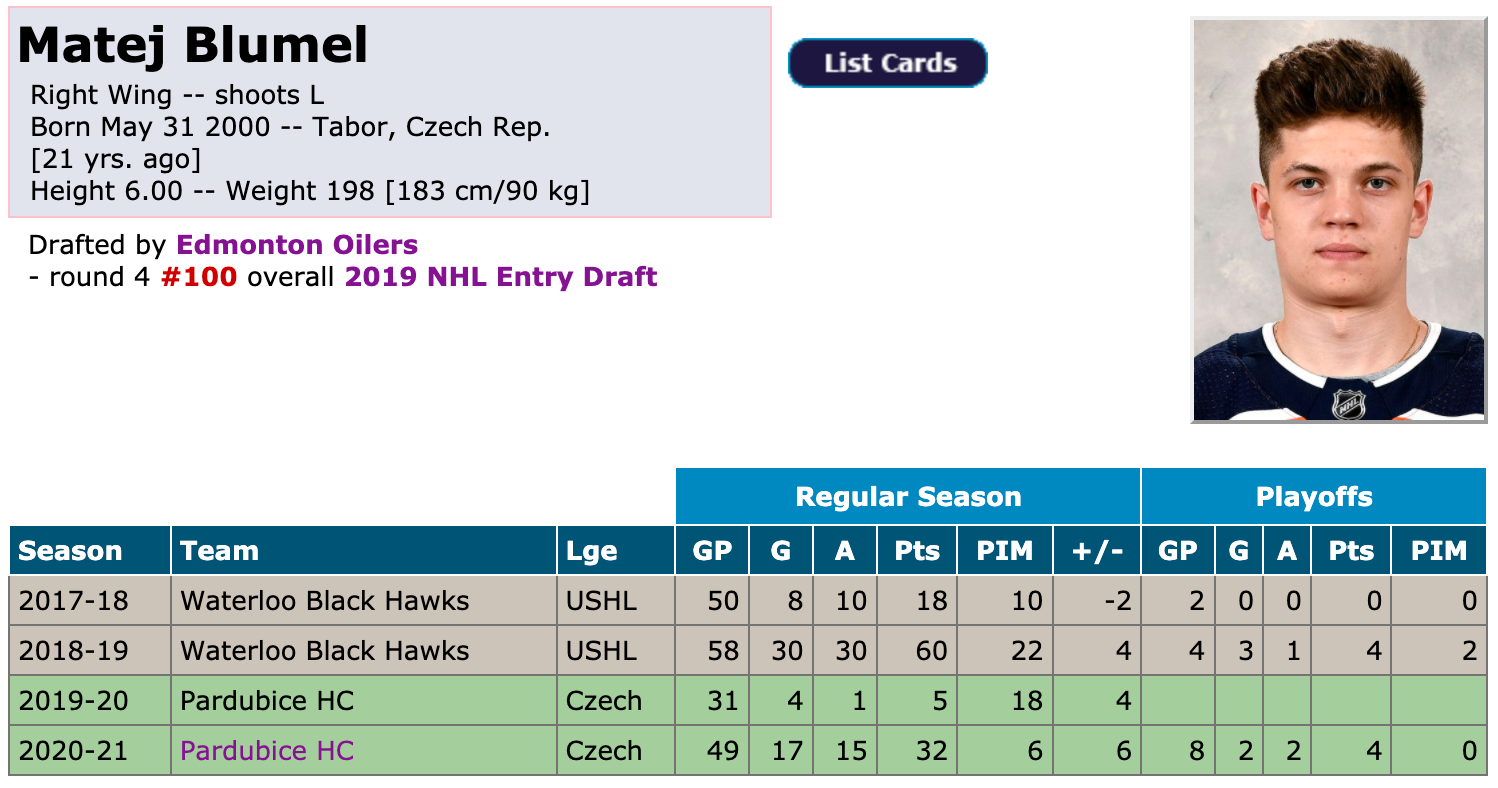 1. I have never seen any full games played by Blumel and only saw highlights from his play this year, so I can’t give a fair and accurate assessment of his play. I will say that the highlights showed him to be a one-shot sniper in the Czech league, where he put up good numbers as a 20-year-old, 17 goals and 32 points in 49 games. I

2. Blumel was drafted outside his first year of eligibility. A product of the HC Pardubice system, Blümel has commited to play at the University of Connecticut but he ended up in the Czech League. The Czech native had two seasons with Waterloo Black Hawks of the USHL, with whom he posted solid boxcar stats of 30-30-60 in 58 games in 2018-19. That represented a major step forward from his freshman campaign in which he posted 8-10-18 in 50 GP.

3. in 2019, when the Oilers took him in the fourth round, 100th overall, here is what Steve Kournianos of the Draft Analyst had to say: “Blumel is an athletic pivot with breakaway speed who plays an aggressive style with or without the puck. He is a minute eater used in all situations, including the penalty kill, where he is as dangerous a threat as he is at even strength or with the man advantage. Blumel’s speed, edgework and agility are excellent. He isn’t very big, but he handles shoves and harassing stickwork with relative ease as he charges towards the net. As if his scoring proclivity weren’t enough, Blumel also is an agitator who gets under an opponent’s skin. He is confident on the puck and can stickhandle out if any jam. He’s an excellent passer and playmaker.”