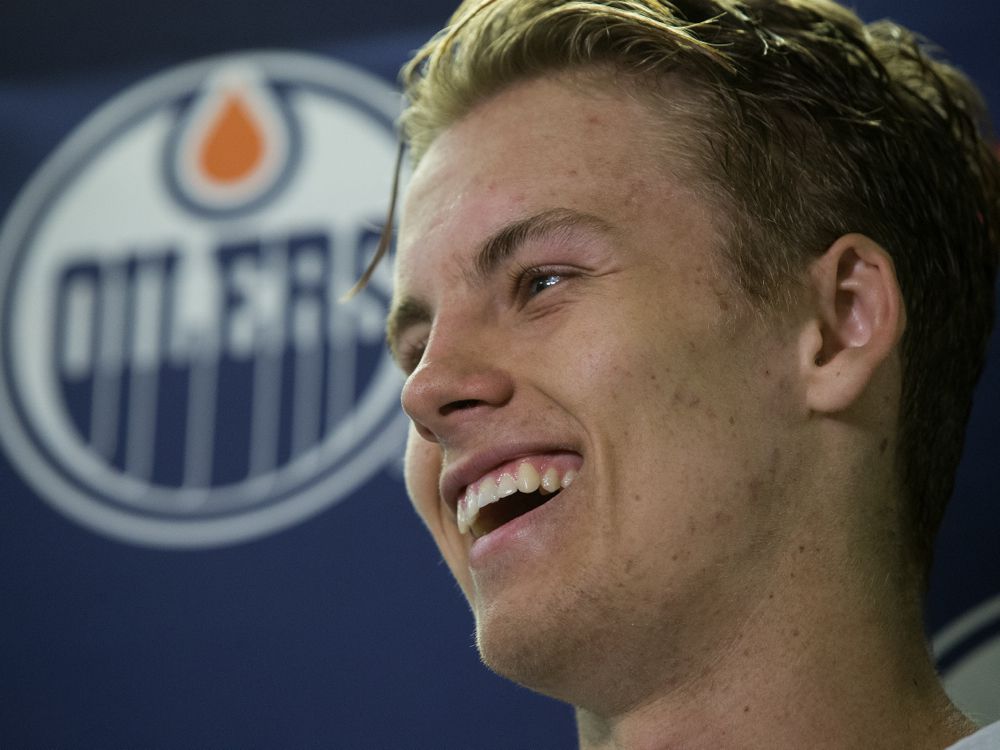 With three prospects in the Top 50, this represents a major improvement over Button’s list last year, when he ranked not Broberg, not Bouchard and not any other Oilers prospect in his Top 50.

And at The Athletic prospect analyst Scott Wheeler lists Holloway as his top riser of the 2020 draft, saying he’s taken a more significant step in his game than his peers. “He was one of the fastest, most athletic, most consistently effective players in college hockey this season and he did it as a 19-year-old. Holloway’s always going to be at his best when he’s playing an up-tempo, engaged north-south style, but he has always had good east-west skill in his own way too, and that really began to pop this year, which bodes well for his pro future.”

2. Last year was the third year in a row that Button hasn’t had an Oilers prospect in the Top 50. On his 2017 list, Button had Jesse Puljujarvi, then with Bakersfield of the AHL, ranked 7th overall. I suspected that Button undervalued Broberg and Bouchard last season, but it could simply be the case that Broberg improved in massive fashion this year in Button’s eyes.

3. From my own viewing of Broberg, I also came way convinced he was Edmonton’s top prospect, ahead of Holloway and Bouchard. The 19-year-old Swedish d-man is huge, extremely fast and can stickhandle the puck well. In his best moments, he ragged the puck like Serge Savard. Of course, he wasn’t always at his best. Some games he appeared to lack confidence and failed to do much on the attack. At times, his defence was uncertain and weak. Overall, though, I continue to be pleased that the Oilers drafted this player.

4. As for Holloway, his scoring exploded this year, going from 17 points in 35 college games as a University of Wisconsin rookie in 2019-20 to 35 points in 23 games this year. He played his last few games with a broken finger and is now out six weeks with the injury. It’s not yet clear if he’ll sign with the Oilers right away or will return to Wisconsin for a third season. It is clear he’s ready for pro hockey.

5. The Top 50 player who dropped the most on Button’s list? Vancouver pick Vasili Podkolzin, who went from 14th last year to 50th this year.

6. Finally in regards to Evan Bouchard, I’m not sure whey Button hasn’t had him ranked higher each season. He excelled in Sweden this year and has earned a huge base of fans in Edmonton based on his play for the Oilers this year. The main issue with Bouchard is playing time, as he’s behind three strong right shot NHL d-men in Ethan Bear, Adam Larsson and Tyson Barrie. At this point, I’m not sure why Bouchard hasn’t been sent to the AHL to get in some games before the NHL playoffs begin. Perhaps that will happen shortly, but time is running out on that option.

“Maybe I just don't have it”: Jesse Puljujarvi's crisis of confidence