Edmonton Oilers used their #14 overall pick to address their biggest area of need — at forward. They selected Dylan Holloway, a centre/left wing with the University of Wisconsin.

With a 2001 Sep 23 birthday. Holloway is already 19, having been too young for the 2019 Draft by just 8 days. At that, the native of Bragg Creek, AB was the second youngest player in NCAA last season, in which he produced relatively modest totals of 8-9-17 in 35 games.

The Oilers were just outside this year’s top tier of 12 or 13 players, with nobody above them making a reach pick. The next tier featured a variety of rankings, with Holloway consistently in the #14-21 range. 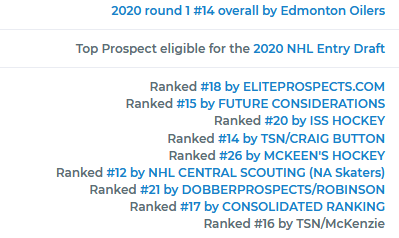 At 6’1, 203 lbs, Holloway plays a power forward game. In 2019-20 at UWisconsin he joined a strong freshman class that included fellow teenagers Alex Turcotte and Cole Caufield, both first-round picks (#5 and #15 respectively) from the 2019 Draft. One result was that Holloway, about 8 months younger than both, found himself a bit further down the line-up, which reflected in his so-so offensive numbers. But just one year earlier as a member of the Okotoks Oilers (!), he ripped up the AJHL to the tune of 40-48-88 in just 53 games, winning the league MVP in the process.