It’s an unusual day in the National Hockey League. For what is surely the first time in the league’s 104-year history, games will take place in both the regular season and the playoffs on the same day. The first but not the last, as we will see variations on this theme three more times in the coming days as the Vancouver Canucks play out the string after a COVID outbreak left the squad inactive for 24 days with plenty of games to make up.

The Edmonton Oilers are the only playoff team with a regular season game left to play, with a final rescheduled encounter against the Vancouver Canucks at 1:30 MDT. That projects as a low-intensity affair which will stand in stark contrast to the Saturday evening tilt between Boston and Washington that formally kicks off the Stanley Cup playoffs.

While the last results of the regular season will continue to trickle in for a few more days, every team but three has completed its 56-game slate already. For 90% of the league, stats are final; only players from the three western Canadian clubs can add to their totals.

And with all their major contenders done, three members of the Edmonton Oilers are assured of completing a very rare feat, whether they add to their own totals or not. It’s been obvious for a while that Connor McDavid and Leon Draisaitl would finish 1-2 in league scoring. But in the closing stages of the season defenceman Tyson Barrie produced at an inexorable point-per-game pace to pull into the scoring lead among NHL defencemen.

Barrie was tied for 4th among d-men as April came to a close, 6 behind then-league leader Adam Fox of New York Rangers. He has scored 7 points in 7 games in May to overtake Fox (0 points in 5 May games) and others to move into first place alone with 8-40-48. It was a near thing, as the rest of the top 10 finished between 41-47 points, but the critical fact on Saturday morning is that among that tightly-packed group only Barrie has a game left to play so can only add to his lead.

It’s been a long, long time since an NHL club could lay claim to having the top two scorers in the league and the top-scoring d-man. How long? you ask. We have to go all the way back to (wait for it) the 1984-85 Edmonton Oilers to find the Hall of Fame trio of Wayne Gretzky, Jari Kurri and Paul Coffey filling the three spots of scoring champ, runner-up and top-scoring rearguard. You may recall that was a pretty decent hockey club that, decades later, would be named the NHL’s Team of the Century 1917-2017. All of Gretzky, Kurri, Coffey and the team itself have banners hanging over the ice surface where McDavid, Draisaitl and Barrie worked their magic in 2021.

The previous edition of the Oilers in 1983-84 accomplished the feat (top 2 scorers, top D) in a different way, as Gretzky and Coffey finished 1-2 in scoring, with Coffey naturally leading all d-men as well. But for the purposes of what follows, we will consider only groups of three different players accomplished the feat of the league’s top two scoring forwards and top d-man on the same club.

It’s a short list, accomplished just a dozen times in the 75 seasons since the end of World War II, and just twice in the 41 seasons that the Oilers have been part of the NHL. The more teams there are in the league, the tougher it is to do, complicated further still by the competitive challenges of the Salary Cap (a.k.a. Parity) Era.

Here’s the full list, dating back to 1945. You may recognize some of these names:

One thing that jumps off the page is that prior to the WHA-NHL merger in 1979, those clubs that were able to accomplish the feat did so more than once, with the same prolific defenceman contributing to each.

All of those luminaries are long since retired from the game. Of the 18 different names from those five powerhouse franchises, all but one (Ken Hodge) are members of the Hockey Hall of Fame.

The latest trio has many years to wait before they can be considered for that honour, and for Tyson Barrie in particular it’s probably a pipe dream. But it’s not premature to applaud their rare achievement in 2021.

What makes it even more extraordinary is the context. Unlike the Wings and Habs of the ’50s, the Blackhawks of the ’60s, the Bruins of the ’70s, or the Oilers of the ’80s, the modern-day Oilers cannot (yet) be considered an NHL powerhouse. Indeed, in one key area this club stands alone as the weakest member of this exclusive club. 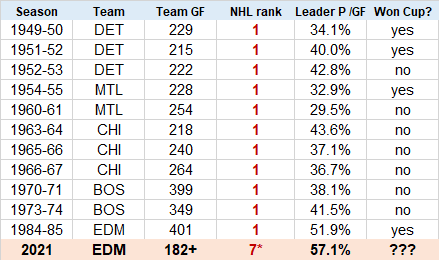 Every single one of the previous trios were the engine powering the highest-scoring team in the NHL that season. The modern Oilers, a lowly 7th. (That could move up a spot or two with a big outburst on Saturday afternoon, but they’ll need to score 15 to catch up with the league-high 197 goals produced by the Presidents’ Trophy champion Colorado Avalanche.)

The other eye-popping stat is in the column second from the right, which represents that percentage of team goals in which the scoring champion was involved. None before Gretzky achieved as much as 45%. The Great One himself, a career-high 51.9% (though he reached at least 50% on three other occasions).

Connor McDavid has taken that to a whole ‘nother level, contributing to 57.1% — exactly 4 of every 7 — of Oilers’ 182 goals to date in 2021. That percentage may change by a couple of tenths on the final day, but it stands out as a truly exceptional case. Only Mario Lemieux in 1988-89 (199 points on 347 Pittsburgh Penguin goals = 57.3%) is in that conversation of a post-expansion scoring champion contributing such a giant share of his team’s overall offence. Mario had two teammates in the top six, including Coffey who led all d-men that season by a ridiculous 38 points, but the #2 scorer (Gretzky, freshly with the Kings) played for a different club.

One other season of interest for local fans was 1989-90, when Gretzky won the scoring title, Mark Messier was the runner-up, while Coffey led all d-men. But by then the three Oilers legends were in the process of going their separate ways, with only Messier still in Edmonton at that point… and not for much longer.

The modern Oilers fan can luxuriate in the knowledge that the two main stars, McDavid and Draisaitl, are under contract for several more years apiece. The same duo also swept the top two spots in the scoring derby a season ago, even as the top-scoring defender on the club, Oscar Klefbom, didn’t even make the top 30 scorers on the back end.

As for Barrie, the crystal ball is much cloudier. But the pending UFA sure hasn’t hurt his negotiating position in what will surely be a closely-watched negotiation, be it with Edmonton, Seattle, or the open market. He has an extensive record as a productive rearguard, though not many would put him at the level of Kelly, Harvey, Pilote, Orr, or Coffey. But in choosing to take a one-year pact with the league’s top scoring stars and then producing at a high level, he made his way into a very exclusive club.

This is the best info we have as we go to publication late Friday night.

The Oilers are up against the salary cap, so do not have the latitude of other clubs such as the Boston Bruins, who reportedly rested 16 regulars in their own season finale earlier this week. Though it looks like they will get a game for Gaetan Haas, Joakim Nygard and Slater Koekkoek, all three of whom have been banged up this last while. Mikko Koskinen appears set to get the last tune-up game, what with starter Mike Smith having played the semi-windup on Wednesday.

Some question why not rest some of the top skaters, but everything Dave Tippett has said in recent days says they all want to keep playing. For Darnell Nurse, for example, Saturday’s game will complete a fourth consecutive season of perfect attendance, and run his consecutive Games Played streak to 310. For Draisaitl, it’ll be 283 straight. You think those horses want to come out of the line-up for any reason? Me neither.

While there’s no reason to expect a super-intense game, it’s fair to anticipate Tippett’s charges to try to button things down a bit. They’ve allowed 3+ goals in each of their last four games. The last time they had such a string of defensive mediocrity was back in Games 6-11, when they allowed 3+ six straight times.

But if McDavid, Draisaitl and/or Barrie get a chance to score a point or two along the way, don’t expect them to pass up the opportunity. Might as well close out their historic season with yet another bang.

STAPLES: McDavid with one of most dominant seasons in NHL history