Only twice before in their illustrious history have the Edmonton Oilers officially played host to same opponent for three consecutive games. They were the headiest of times, back in the mid-1980s when the NHL experimented with a World Series-style 2-3-2 format in its championship series just as the Oilers were in the ascendant. In 1984 the Oilers gained a split on Long Island, then came home to sweep the four-time defending champions 7-2, 7-2, and 5-2 in Games 3, 4, and 5 to win their first Stanley Cup. The following year, the Oil followed the same formula, getting the split in Philadelphia before coming home to win 4-3, 5-3, and 8-3 and take the Grail going away. The NHL abandoned the experiment immediately thereafter.

One might make a case for the bubble playoffs of 2020, in which Edmonton played an entire best-of-five series in Rogers Place against Chicago Blackhawks, though they were officially the visiting team for two of the four games. That play-in series had a less happy outcome than those others cited above, even as it has more immediate relevance to the empty-house NHL of the early 2020s.

That paradigm has led to the modern practice of series between teams, commonly two games but occasionally three. Through 22 games the Oilers have played ten two-game sets, just one of them in the traditional home-and-away format, the others featuring both games in the same city. But tonight the Toronto Maple Leafs come to town to kick off the first three-game set of the season for the Oilers. It also begins a seven-game home stand that will end with another three-game series against the Ottawa Senators, sandwiching a single game where the Oilers host Calgary Flames. 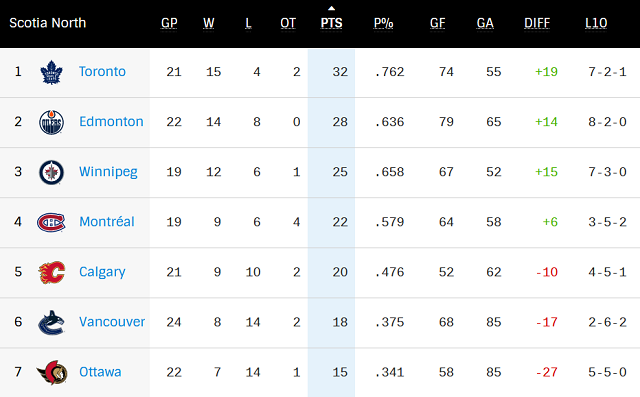 These are not the Stanley Cup Finals, obviously, but there is no denying they are Big Games. The red-hot Oilers enter the series in second place in the Scotia North (popularly: Canadian) Division, four points behind the high-riding Maple Leafs and within striking distance of top spot were everything to go right in the series.

That won’t be easy. The visitors are a strong club with just 4 regulation losses through their first 21 games, an excellent road record (6-1-1), and the best defensive results in the division at just 2.62 goals against per game.  On the offensive side of the puck their 3.52 goals for per game are just behind Edmonton’s league-leading 3.59.

Both clubs’ hot rolls have started to create separation in the standings, with only Winnipeg Jets hanging around in the same neighbourhood. Check out the “Last 10” column at far right for details. The other four Canadian clubs have each won fewer than half of their games.

The two sides have met four times previously this season, splitting a tight two-game set in each of Toronto and Edmonton. The Oilers won 3-1, then lost 4-2 in Hogtown early in the season, with both games featuring an empty-netter. Then in Edmonton the following week, they split a pair of 4-3 decisions, the Oilers’ victory coming in overtime. Thus Toronto currently leads the season series with a 2-1-1 record compared to Edmonton’s 2-2-0, even as each team has scored 12 goals and allowed 12.

Edmonton’s Connor McDavid and Leon Draisaitl rank 1-2 in the NHL in assists and points, while Toronto’s Auston Matthews along with McDavid are 1-2 in goals. Mitch Marner and Draisaitl rank 1-2 among forwards and 2-3 overall (behind Montreal d-man Joel Edmundson’s +18) in plus.

The Leafs will be down a couple of quarts tonight, however, as Matthews will miss the game with a hand/wrist issue suffered in Toronto’s last game, a 2-1 overtime win over Calgary. The Leafs will also turn to backup goalie Jack Campbell, who returns to action from a leg injury suffered a month ago when Calgary’s Matthew Tkachuk “accidentally” fell on him. Toronto’s #1 stopper Frederik Andersen, who played all four previous meetings with Edmonton, has been sidelined with a lower body injury.

One more historical note: the Maple Leafs and Oilers have a history that dates back to the 1970s when the likes of Jim Harrison, Jacques Plante and Norm Ullman played for both teams, but in two different leagues. Since the Oilers entered the NHL in 1979 (over the strenuous objections of Leafs owner “Old Weird Harold” Ballard), this is the first time they have been placed in the same division. It is not, however, the first time thay have played “four-point games”. In Edmonton’s first two seasons, the 21-team NHL played a fully-balanced schedule, 4 games against every opponent, top 16 make the playoffs, divisions listed but for window dressing purposes only.

The last time the two squads played a four-pointer this late in the season was four decades ago, on 1981 Jan 14 at venerated Maple Leaf Gardens, Game #42 of 80 for the Oilers. Edmonton spotted the Leafs a 3-0 lead, before a Wayne Gretzky goal in the last minute of the second period set the stage for a stirring final frame that saw the upstart Oilers score 6 times (on 7 shots!)  to win going away, 7-4. Lee Fogolin scored the shorthanded game winner on assists from Gretzky and the rookie Paul Coffey.

The Oilers would ultimately finish in 14th place, Toronto three points back in 16th, both barely scraping into the playoffs. Without that stirring comeback in their last meeting, the Oilers would have finished a point behind their Canadian rivals. Such is the nature of “four- point games”.

Good times. May there be more to come in an increasingly compelling 2021 season. 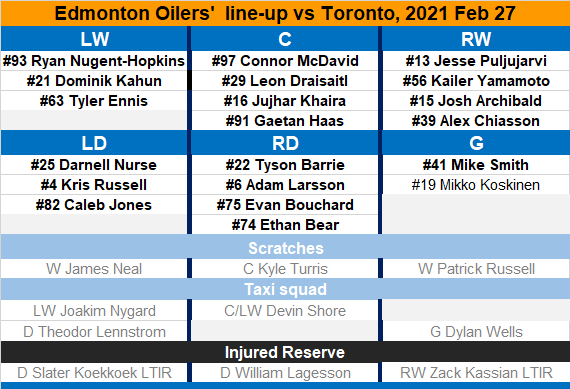 Still awaiting official word at this writing, so we are projecting the same line-up as shut out Vancouver 3-0 on Thursday. That was an 11 forward/7 defenceman arrangement that saw a variety of forwards take the occasional double-shift on the fourth line with Gaetan Haas and Alex Chiasson, while on the back end Darnell Nurse was a one-man double shift who spent the game switching between two different partners, Tyson Barrie and freshly-reactivated Ethan Bear.

Mike Smith recorded that shutout in Vancouver and is projected by Left Wing Lock to be tonight’s starter, though that remains to be confirmed. We will update this post once the details eventually seep out.

A heads-up to readers that tonight’s game is in the early slot on Hockey Night in Canada, at 5pm MST.

STAPLES: Everybody loves Jesse Puljujarvi, even his coach