Edmonton Oilers were an NHL trade deadline loser, hockey analysts say, but not as bad as Winnipeg

In the wake of the 2021 NHL trade deadline, numerous hockey analysts and writers are naming the Edmonton Oilers as one of the losers of the session, though most are even more critical of the Winnipeg Jets.

had Edmonton and Winnipeg in the “other losers” category, along with the Carolina Hurricanes, saying these teams “had all indicated some willingness to get in the trade game as the deadline approached. But after making only minor deals, all three have probably lost ground relative to their biggest division rivals.” 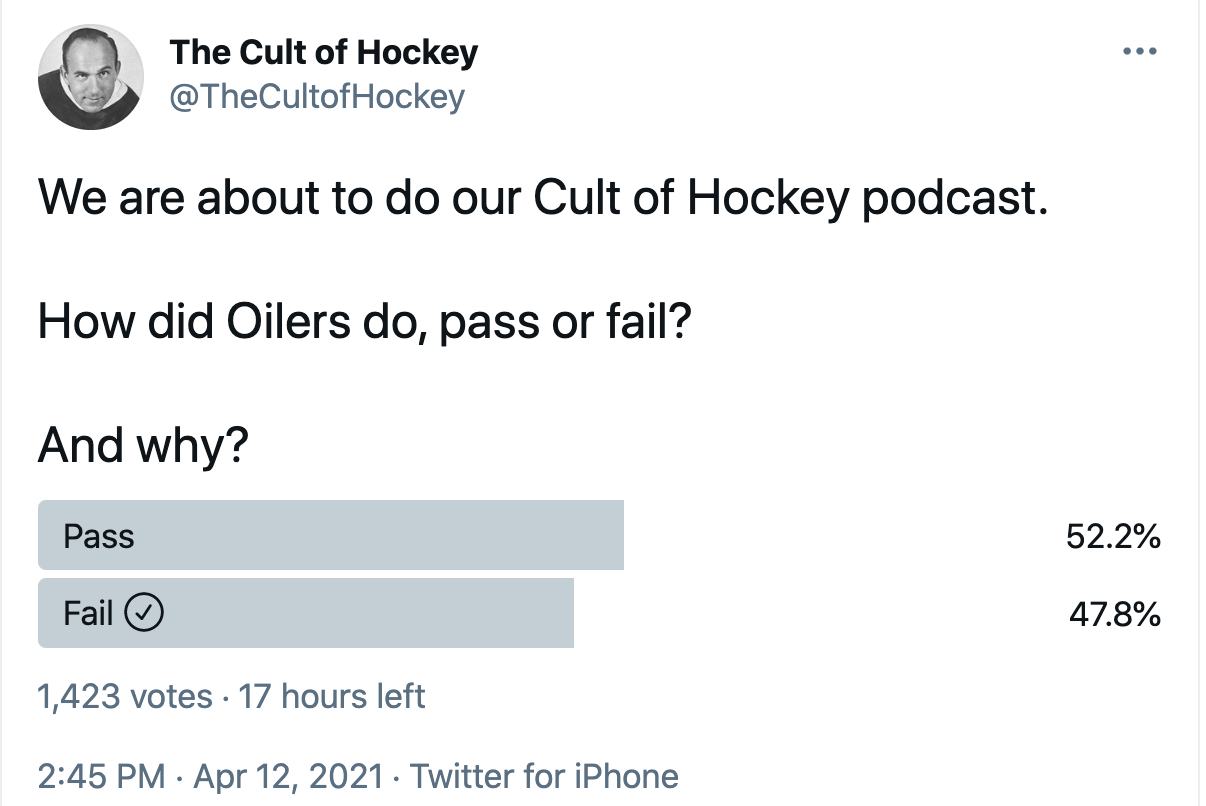 Josh Wegman of The Score noted the Jets made just one move, bringing in d-man Jordie Benn from Vancouver for a sixth round pick. “Benn is nothing more than a depth blue-liner and will have a hard time cracking a weak Winnipeg top six. The Jets sorely needed a defenseman who can play in their top four, but failed to address it… The Toronto Maple Leafs further separated themselves from the rest of the North Division by adding Nick Foligno, Riley Nash, Ben Hutton, and David Rittich. Winnipeg, likely Toronto’s biggest competition in the division, could’ve closed the gap on the Leafs with upgrades on the blue line, but instead, the lack of aggressiveness from GM Kevin Cheveldayoff widened it.”

At the Athletic, Scott Burnside said criticized both Winnipeg and Edmonton, saying of the Oilers: Edmonton Oilers: “We like the addition of defenseman Dmitry Kulikov and he’s had a nice season for New Jersey. But when you watched teams like Toronto and Tampa Bay employ other teams to make significant adds even though they faced dire salary cap situations, it seems like the Oilers, who desperately need some top-six help up front, allowed their competition in the North to step forward while they stood still.”

At ESPN, writer Greg Wyshynski also hammered on the Jets: “This team needed one more impact defenseman, and GM Kevin Cheveldayoff couldn’t pry one loose… This team was one or two pieces away from being a serious contender to come out of the North Division.”

Ken Campbell at Sports Illustrated blasted the Jets and the Oilers. “How the Jets could not have made an all-out effort to get David Savard is beyond comprehension. This team was screaming out for someone like him, or Jamie Oleksiak, or Alex Goligoski. The Jets ended up with Jordie Benn, which was a decent pick-up, but they needed to do more.”

As for the Oilers, Campbell said:  “Again, ‘Loser’ is a harsh, but relative term. The Oilers did supplement their blueline corps by getting Dmitri Kulikov, but a top-six forward would have been a welcome addition on a team that everyone in hockey knows is top-heavy.”

The National Post’s Michael Traikos also had Winnipeg and Edmonton on the list of losers. “Granted, the Jets made their big move earlier in the year when they acquired Pierre-Luc Dubois from the Blue Jackets. But this was an opportunity lost for a team that is built up front and in net, but is still a top-4 defenceman away from matching up against the top contenders.”

As for the Oilers, Traikos said: “While GM Ken Holland was telling everyone that he didn’t have the cap space to make a significant deal, Toronto, Tampa Bay and Boston were creating cap space by acquiring injured players and/or convincing teams into retaining as much as 75% in salary by tossing in an extra draft pick. Why the Oilers didn’t do something similar by acquiring an impact forward like Taylor Hall or Carl Soderberg was a huge miss.”

At CBS Sports, Peter Blackburn also listed the Oilers as a loser: “The Oilers, who should be desperate to make some sort of run in the next few years, did nothing outside of picking up a depth defenseman in Dmitry Kulikov. That means no help for Connor McDavid and Leon Draisaitl, the two offensive monsters that have been forced to carry Edmonton in recent years. You can’t be considered a serious contender without depth and the Oilers need serious help behind/alongside those guys. Once again, they’ve failed to provide any reinforcements and, as such, have set themselves up to inevitably waste another one of McDavid’s prime years.”

Nick Goss for NBC Sports also blasted Winnipeg: “Veterans such as Mattias Ekholm, David Savard, Josh Manson, Erik Gudbranson, Jamie Oleksiak and others would have been excellent additions to Winnipeg’s blue line. This is the best Jets team since the franchise relocated to Winnipeg in 2011-12. There was no excuse not to add a premium defenseman before the trade deadline.”

And Ryan O’Halloran of the Denver Post said of the Jets: “The Jets took big deadline swings in 2018 (Paul Stastny) and ’19 (Kevin Hayes), but were quiet this year aside from getting Vancouver defenseman Jordie Benn.”