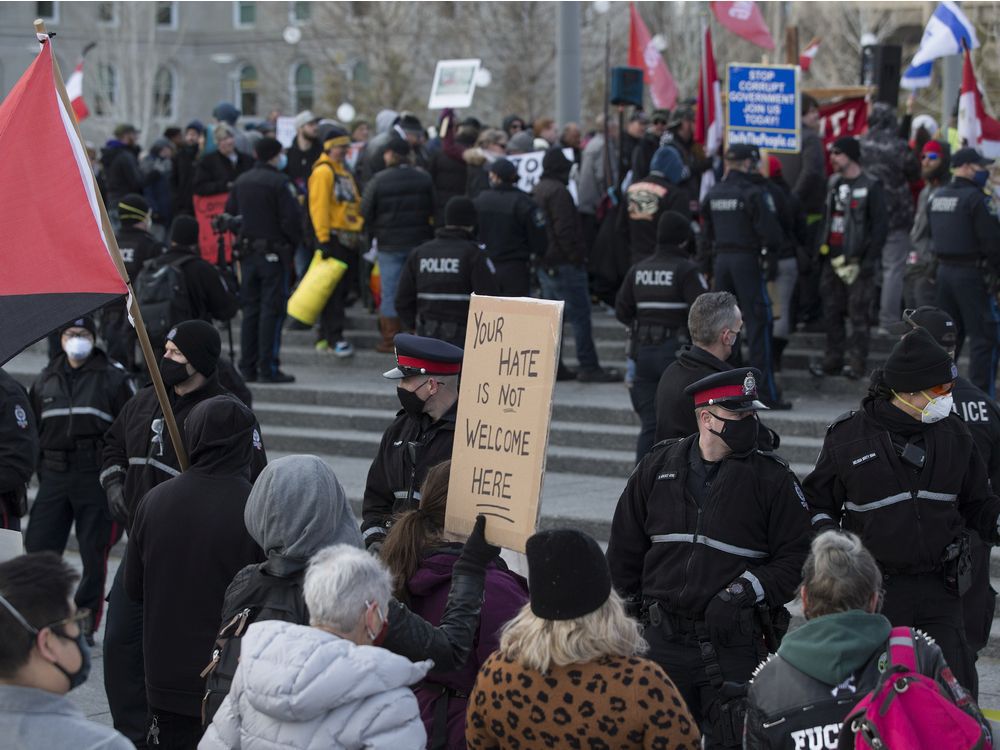 Edmonton’s police chief says the department doesn’t have evidence of racist intent behind the use of tiki torches at a February anti-lockdown rally.

Chief Dale McFee told local media Tuesday he and the Edmonton Police Service don’t condone tiki torches but said some people didn’t know why they were carrying them at the legislature on Feb. 20. Torches are a symbol often associated with white nationalism and McFee confirmed hate crimes detectives were present.

“Because somebody says that’s a white supremacist rally, you have to have evidence that it is, because that’s not what it was,” he said.

“We don’t have that evidence. Just because someone says it’s a racist rally … you still have to have intent under the Criminal Code in relation to that. … and if you have evidence that I haven’t seen, I will ensure that our people investigate it. But playing it out in the media and trying to play one group against the other isn’t our role.”

The protest has been widely condemned for white supremacist imagery.

McFee said if enforcement is the answer police need to be consistent, and there isn’t a legal threshold available in Canadian criminal laws that would lead to a successful prosecution.

He also reiterated that EPS does not condone using the torches, and said if the “real meaning” behind their use was racist then police want to see that evidence.

“If we’re going back to the old days that were in Virginia, we denounce that. There’s no place for that in our communities,” he said.

McFee reiterated a statement published on EPS’ Twitter account after the rally that the event was largely peaceful. But he later said that four officers were hurt and one person punched officers in the head. That incident is still under investigation and if the person is identified they will be held accountable, he said.

“Tiki torches, certainly I denounce that, I mean there’s no place for that … But that said, there’s a difference between the legal threshold in relation to what is a hate crime,” he said.

“It was a peaceful protest for the large part. That doesn’t mean everybody’s going to agree with that, both sides aren’t going to agree on each other on this.”

He said police need to “take the balance” and be there to keep the peace at rallies and make sure no one gets hurt.