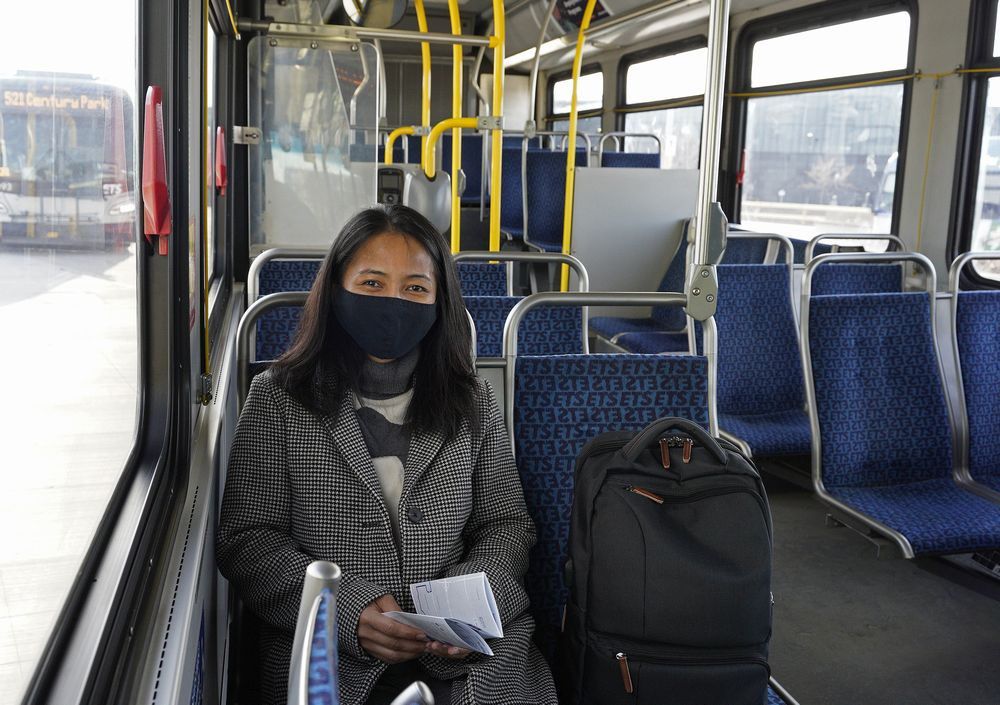 Edmonton’s revamped bus system is receiving mixed reviews during the first weekday commute, with some people late to work and others dropped off in places they didn’t expect.

Dozens of buses adorning their new 500 bus routes to mark their service in the city’s southeast were quickly pulling in and out of the Mill Woods Transit Centre Monday morning. Edmonton Transit Services (ETS) workers were helping direct people to their new buses at an info centre topped with individual route information as well as larger pamphlets detailing the citywide changes.

The City of Edmonton rolled out a new system Sunday that sees direct, crosstown routes and more frequent bus service as well as the closing of hundreds of former routes. On-demand services are available in certain neighbourhoods where bus stops are farther apart.

Many people at the transit centre were in and out quickly, jumping off one bus and quickly scurrying onto the next. However, the changes had some people scratching their heads as they were trying to find their way to or from work.

Yaa Boakye said she has been dreading the changes for a month, causing her to have sleepless nights over commuting to work after her regular bus stop had closure signs put on it. She said the new routes have extended the time on her commute from Capilano to Mill Woods and drops her off farther from where she needs to be.

“I got screwed up,” said Boakye in between buses. “I don’t think whoever (changed the routes) takes the bus.”

She said she doesn’t think the commute will get easier as time passes and is worried about walking and waiting in cold temperatures in the winter.

“It will never get easy because I’m thinking about the winter and the way I have to walk,” said Boakye. “I take 85 and 85 is no more, it is just on demand so I am totally screwed up.”

Across the platform from Boakye was Des Antolin, who said she was unaware of the route changes and was more than an hour late for work Monday morning.

“I used Google Maps to go to my work this morning and then the bus driver didn’t stop close to my work. I didn’t know why,” said Antolin. “I don’t know what what bus or what number I’m going to take tomorrow.”

She said she would be going home to figure out the new routes and hoped it would be easier to get around the city when she became more familiar with the system.

Kamilindi Ignace took route 8 for the first time Sunday and went a bit early to make sure he got to work in time for his night shift. Commuting home Monday morning, he said the trip was fine, but not as fast as before.

“The same as before (but) the time between the buses is longer,” he said.

“I went earlier because I thought I might miss the bus.”

Another passenger said she tried to take the bus from Mill Woods on Sunday but couldn’t figure out the bus numbers and went home.

Inside the transit centre Monday morning, ETS workers said they were on the scene Sunday and for the most part had heard positive reviews from the riders, noting a route to downtown now has buses running every three minutes.

The workers acknowledged there has been some confusion, but said most people just needed to be pointed in the right direction.