Edmonton transit activists call on city council to halt planned cash fare increase to $3.75 in May 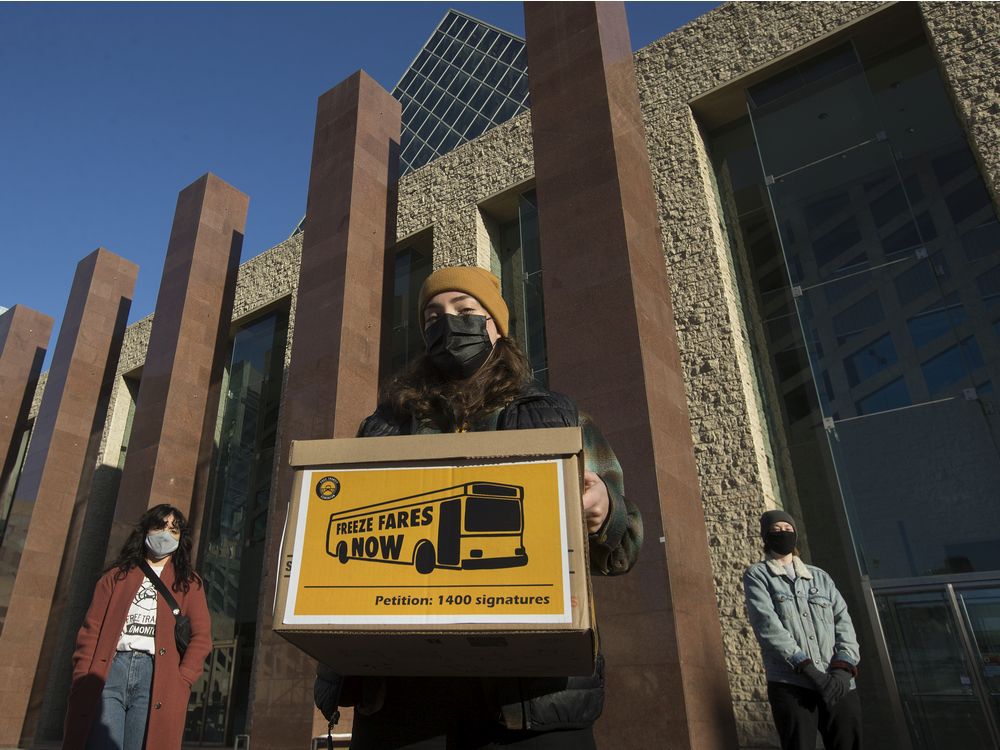 In the city’s current approved budget, the cash fare is set to increase to $3.75 from $3.50 on May 1. The fare is then scheduled to rise to $4 in 2022. All other fees for tickets and monthly passes went up in February.

Paige Gorsak, organizer with Free Transit Edmonton, said the group dropped off the petition signatures to show councillors that there are a number of people against the fare increase and also some who won’t be able to afford it.

As residents continue to recover from the financial impacts of the COVID-19 pandemic, Gorsak said it isn’t the time to increase fares that will negatively impact low-income Edmontonians. This increase would also make Edmonton’s transit system more expensive than most other major Canadian cities including Toronto, Calgary, Vancouver and Montreal.

“In the middle of a pandemic, when we know that there are so many community members who are hurting financially, we are seeing city council download the budget struggles onto those community members. The folks who are impacted most by a fare increase are low-income Edmontonians and these are the folks who are relying on transit right now,” Gorsak said Monday. “The 25 cents might seem small but that can be huge to someone who can’t afford it or to someone where that extra 25 cents means they’re going to choose another way of getting around the city.”

Mayor Don Iveson said although the cash fare is set to go up, there are other alternative programs including subsidized monthly passes for low-income residents and free rides for children 12 and under when accompanied by a fare-paying adult. With an electronic payment system coming online soon, the city is also recommending a discounted single-trip pass of $3 for those who use smart fare. Iveson said the city’s goal is to provide substantial discounts to those that need them.

“Rather than making it a little bit cheaper for everybody, we’re making it a lot cheaper for people who really need the support,” Iveson said. “We’ve done a lot to remove barriers to transit as part of our overall approach to really target the subsidies to people that need them the most.”

As the city looks to rebound from the pandemic and increase ridership, Gorsak said increasing any fare isn’t the right answer to meet those goals. She also pointed to the city’s revised community energy transition strategy, which was discussed by councillors Monday, emphasizing the importance of transit.

“Transportation is encompassed in 40 per cent of our emissions so we need them to focus on those low-carbon transportation options,” she said. “When you increase fares, you have a direct impact on ridership.”

If council were to decide not to implement the planned fare increase, the city projects it would need to make up $870,000 in estimated revenues in the budget. Transit fees will need to be approved through a vote by all of council next Monday in order to finalize the 2021 budget.