This in from Reid Wilkins of CHED, news that Ethan Bear won’t be playing tonight for the Oilers, even as he practiced on a pairing with Evan Bouchard on Sunday: “Tippett says Ethan Bear will not play tonight.”

As for Gaetan Haas, Oilers coach Dave Tippet said: “He had a skate today and he’s closer. He’s got to get himself feeling 100%… he’s close.” 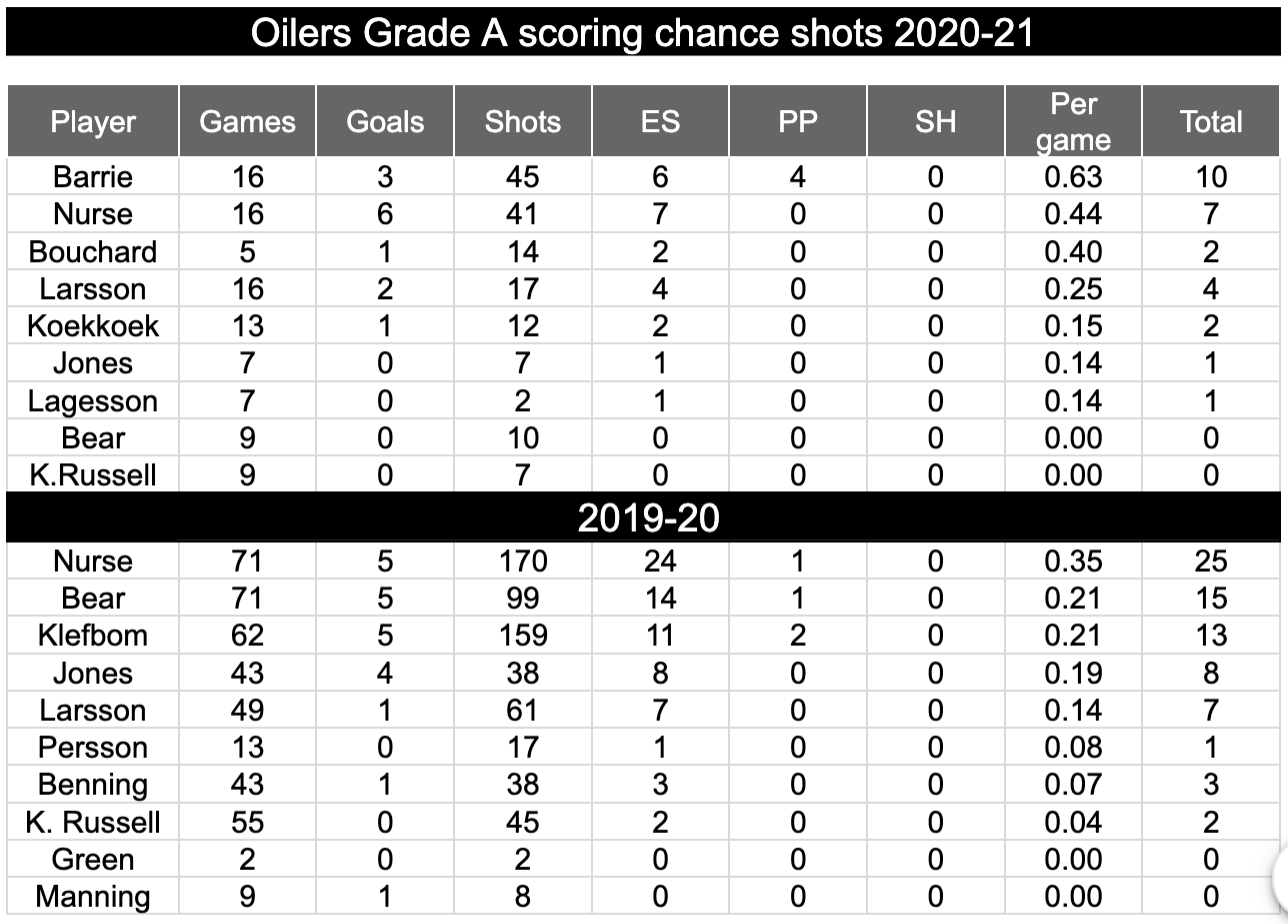 1. Bear has had a rocky start to the year. He’s been inconsistent on the attack and on defence. He’s been sent to the press box. That said, in his most recent run of games he was settling down and playing a sounder, safer game. But it’s no easy matter to accommodate all the NHL-quality players the Edmonton Oilers now have on defence, which also means there’s no reason to rush Bear back into the line-up.

2. One measure of just how improved the Oilers are on defence this year is the rate of Grade A scoring chance shots from d-men this year. This year the Oilers have three d-men, Tyson Barrie, Darnell Nurse and Evan Bouchard, who are getting more Grade A shots per game on net than any Oilers d-man had per game last year.

4. For his part, Bear had 15 Grade A shots in 71 games last year, but has yet to get one in nine games this year. On a blueline with so many d-men now able to get dangerous shots on net, Bear is lagging a bit behind right now.

5. Overall, it’s a huge positive for the Oilers to have so many d-men capable of launching dangerous shots on net. I didn’t count this during the Decade of Darkness-plus season, but it’s my feeling the Oilers d-men were badly out chanced in those seasons. Now the Oilers d-men are getting more nasty shots on net and scoring more, as a result. That’s huge for the Oilers, huge. Darnell Nurse is tied for the lead in NHL goal scoring for d-men, while Tyson Barrie is tied for sixth and Adam Larsson tied for 16th.

LEAVINS: Oilers play most complete game of the season in 3-0 win over Habs

Previous articleEvan Bouchard moves to left side of defence, Jesse Puljujarvi and Gaetan Haas back on ice
Next articleCOVID-19: Alberta sees 251 new cases and two deaths on Family Day