Everybody loves Jesse Puljujarvi right now, even his coach, who says: “I love Jesse”

Connor McDavid and Leon Drasaitl are one and two in NHL scoring.

Darnell Nurse is one of the NHL’s top scoring d-men.

Mike Smith has the best save percentage of any regular NHL goalie.

And, perhaps most surprising, all kinds of bit players, role players and unsung Oilers are coming through with strong play, from  grinders Jujhar Khaira, Tyler Ennis and Josh Archibald on the team’s hard-checking Nitty Gritty Dirt Line to Gaetan Haas on the penalty kill to Jesse Puljujarvi, who suddenly looks every bit the fourth overall pick in the 2016 draft.

Puljujarvi has six goals in his last 10 games. He’s taking care of business both in his own zone and as a grinder in front of the opposition net.

He’s playing so well that he’s even won over his coach, something Puljujarvi never came close to doing with Todd McLellan and Ken Hitchcock in the young forward’s first stint with the Oilers.

“I love Jesse,” said coach Dave Tippett when asked about Puljujarvi. “He’s always having fun. You love to see a guy, when he scores he’s having so much fun, he’s like a kid in a candy store out there. He’s playing really well. He plays hard. He’s around it. He plays hard all the time. He’s come in and he’s really given us a boost. He’s a Top 6 forward that can play in a lot of different situations and I think there’s huge upside on him going forward but he’s been real good for us so far.”

This summer I argued it would be a good idea to try Puljujarvi with McDavid based on their past success together. I became more convinced that Puljujarvi would have some NHL success after watching him in Finland in the fall. He was just so big, fast, skilled and confident, like an aircraft carrier cruising up and down the ice, dominating the battle theatre. At that time I wrote that the 22-year-old Puljujarvi was fairly swaggering with confidence on the ice,  glowing with purpose, shining like a well-cut diamond, a most welcome sight.

But could he translate that to the NHL? No one could be certain until he actually did it.

Puljujarvi was inconsistent in his early games in Edmonton this winter. He wasn’t helped by playing with a struggling Kyle Turris, but he’s put together a run of solid games on the top line.

His linemates McDavid and Nugent-Hopkins now look to pass to Puljujarvi, something that didn’t happen so much in his previous stint with the Oilers. Nugent-Hopkins even came to Puljujarvi’s defence after Antoine Roussel of Vancouver cheap shotted him with a punch, a sure sign this Oilers team is coming together.

When it comes to the heart and the guts of the NHL game — making major contributions to Grade A scoring chances at even strength, as well as not making major mistakes on Grade A chances against — Puljujarvi is the Oilers best winger.

He’s made 41 such major contributions to Grade A chances in 272 even strength minutes, 2.2 per game.

Next best for Oilers wingers is Nugent Hopkins and Zack Kassian, 1.97 per game, then Dominik Kahun, 1.87 per game. Connor McDavid leads the team overall with 3.1 per game.

Can Puljujarvi keep up the scoring? We’re all starting to believe, most importantly, his coach. 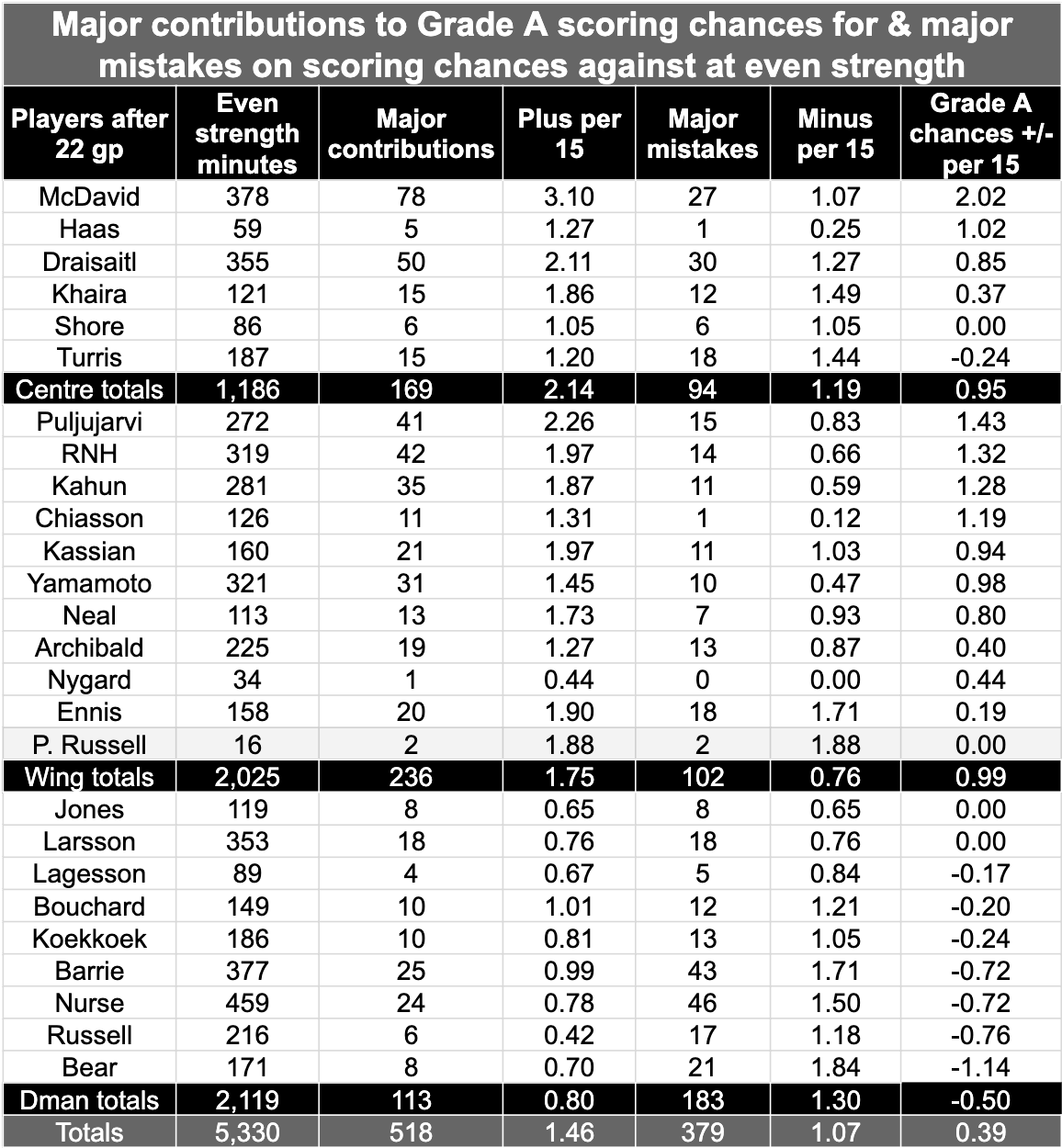 McCURDY: Caleb Jones get an opportunity to draw back in

Previous articleThree to See Saturday/Sunday: Braxton Garneau, Alberta: Growing Up Black and Tarkovsky's Mirror
Next articlePika performance: Pokemon celebrates 25 years from the top of the world