These are heady days for fans of the Edmonton Oilers. After the club struggled out of the gate with just 3 wins through 9 games, we’ve since seen the Oil gush up the standings winning 10 of their last 12.

A few things have gone right along the way, not least of which is stablilization of the goaltending position. But perhaps the single biggest contributor has been an eruption of depth scoring.

Through those first 9 games, just 4 Oilers forwards had scored more than 3 points. No mystery as to who was leading the charge, namely the primary pairs on each of Edmonton’s two scoring lines. Connor McDavid had 14 points, Leon Draisaitl 13, Ryan Nugent-Hopkins 7 and Kailer Yamamoto 6. But the team was getting little production from the “third wheel” on those lines, and even less from a bottom six that also was bleeding goals against at an alarming rate.

Let’s leave aside the Big Four identified above, and look at the rest of the forward corps, which for the purposes of this post we will define as “secondary scoring”. This is how things stood after that nasty 9-game start: 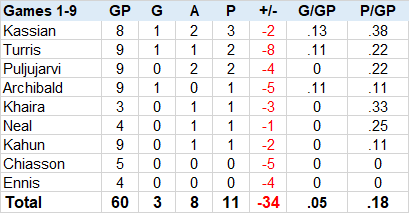 Nine players listed here, each an NHL veteran of over 100 games played… well over, in most cases. Yet as a group they barely moved the needle at the offensive end of the ice, all the while getting mauled at the other end as well. Look at that sea of red in the plus/minus column, almost all of which was “earned” in 5v5 situations. Not infrequent of course that two or even three of these guys could be saddled with a minus on the same goal against, but even if you divide that gross (using the term advisedly) -34 by 3, it still yields a team minus in the double digits. That’s more than one goal per game. Any wonder the team was losing two-thirds of the time?

That started to change in Game 10, when Dominik Kahun opened the scoring with his first of the season, then Josh Archibald beat a goalie for the first time (he’d scored one empty-netter in his first 9). Just enough support scoring for a pair of McDavid goals for the Oilers to eke out a 4-3 win over Toronto. Kahun struck again just 8 seconds into the next game, then James Neal scored his first two of the season, and again the Oilers won. Next game it was Jesse Puljujarvi with his first two of the season, and just like that the Oilers had evened their record at 6-6-0. Moreover they suddenly had four depth scorers with 2 goals each on the season, where a week earlier they had none at all.

And so it continued. No need to detail each game along the way, so let’s jump to the scoring summary of those same nine players from Games 10-21: 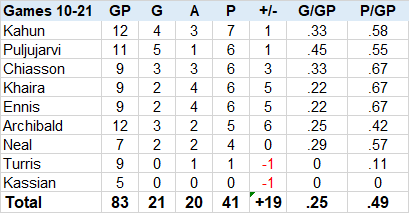 In a word, wowsa.

Worth noting just two players of the identified group played every game of the twelve. These are, after all, depth scorers. During this time all of Tyler Ennis, Alex Chiasson, and Neal passed through waivers for goodness sake. Jujhar Khaira had done likewise at the beginning of the season. All four spent time on the taxi squad before returning to the line-up with a vengeance. Each of Chiasson, Ennis and Khaira played 9 of the 12 games and scored 6 points with a solid plus.

Puljujarvi and Kahun, meanwhile, have each become productive wingers riding shotgun in the top six for the most part.

As a collective, the group played 83 games, the equivalent of a full NHL season for one player. Those boxcars of 21-20-41 shine like a diamond in the context of “secondary scoring”.

As does that gross +19 stand out in the context of “secondary out-scoring”. Applying the /3 rule, we can still conclude that on a per-game basis the Oilers have been running half a goal to the good with their depth forwards on the ice. Much of the credit goes to the Ennis-Khaira-Archibald line which has been firing on all cylinders at both ends of the ice, contributing key goals along the way. Both of Ennis’ goals are game-winners, each breaking open a tie game in the third period. Khaira has a game-winner as well, as does another depth scorer, Gaetan Haas, who is still in the process of working his way back into the line-up after missing the opening ten games altogether.

The only sour notes in all this have been sounded by veterans Zack Kassian and Kyle Turris, neither of whom was able to find their offensive game in the recent run before each suffered an injury. In the case of Turris, he at least was able to staunch the bleeding at the defensive end, but in truth his spot in the game-night line-up was already in jeopardy due to his being outperformed by his would-be peers in the bottom six.

But the turnaround of the group as a whole has been overwhelmingly positive. With McDavid and Draisaitl continuing to light it up as the top two point scorers in the NHL and both Tyson Barrie and Darnell Nurse flying high among the top five scorers among defencemen, the Oilers have emerged as something of an offensive juggernaut. Going into tonight’s action, they lead the NHL in goals scored with 76 through 21 games, and in goals per game at 3.62.

Here are the top ten teams in that latter category, which corrects for the disparity in Games Played between  the Canadian division and its three American counterparts. 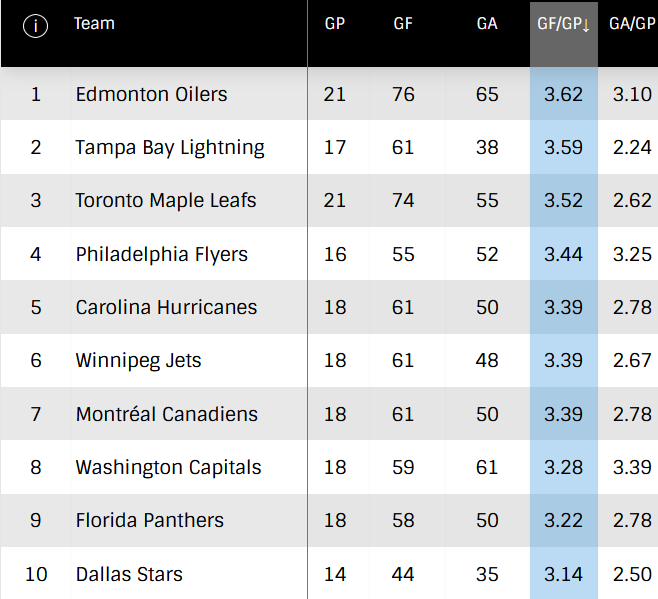 A pleasant change to see the Oilers leading the league in goal production, no? Last time they did so for a full season was back in 1986-87 when Wayne Gretzky won the scoring title by a mere 75 points over the runner-up, his own linemate Jari Kurri. Obviously there are important differences, but the re-emergence of the Oil as a high-scoring club, not just a couple of high-scoring players with little depth support, is a very promising development indeed.

…is not yet available. In his morning media avail, coach Dave Tippett again mentioned a number of players nursing physical issues. The one piece of hard news at this writing is that Mike Smith will again get the start.

McCURDY: Caleb Jones get an opportunity to draw back in