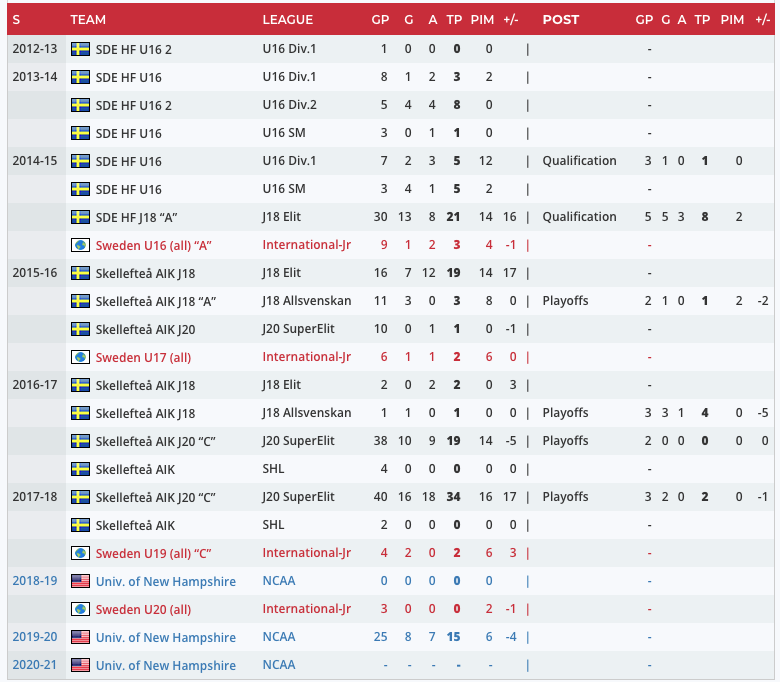 University of New Hampshire hockey blog writer Mike Lowry had a long post on the player, where he reported on Engaras committing to play for the college team last fall.

The blog got a scouting report on the player from Carl Larsson, Future Considerations’ scout for Sweden: “He is a clever two-way center who reads the game well. Has really great skating abilities and good work ethic. Has improved his release and is now a good shooter, combined with the smartness which he uses to find unexpected passes. I am excited to see his future development as he is that kind of guy that really works hard, on and off ice. He is certainly determined to have a good hockey career.”

In an interview, Engaras told Lowry: “I have always had my thoughts on playing NCAA hockey but I made my decision in November when I first talked with (UNH Head Coach) Mike Souza. I want to develop and take steps as a hockey player and I think that playing in a top league as the NCAA will be great for me and a great next step in my hockey career. Also, it’s an opportunity to combine great hockey with great education. That’s something I’m really looking forward to and I am very excited.”

At this stage in your hockey development, what are the strengths of your game? What areas are you trying to improve, Lowry asked him?

“My strengths are my skating abilities and my hockey sense. I’m working hard in all three zones and I think I have good defensive qualities. It’s the offensive part of my game that I want to improve.”

His teammate Angus Crookshank said of him last November: “I think he’s one of the hardest guys to play against in practice, personally. He’s gifted offensively so he does a great job offensively scoring goals and getting to the dirty areas. … Fil’s a specimen, on and off the ice. He’s big, he’s strong, but he can move. He can move really well. For example, if you cut back on him, he does a very good job of staying with you, containing you, but he’ll also use his physicality against you, knock you off the puck. It’s tough to play against him.”

And his coach Mike Souza: “He’s talented. He’s a two-way (player). He’s cerebral. I don’t think he’s going to bring people out of their seats but if you understand the game you’ll have a real appreciation for the way he plays both sides of the puck.”

Here’s what Oilers commentators and fans said on Twitter:

An overage forward, Engaras was passed over in two previous drafts, then had to sit out all of 2018-19 to be eligible to play for UNH. He’s previously described himself as a good skater and defensive forward with work to do offensively:

speeds @hockeysymposium
I will be curious to see what EDMs plan is for Engaras? Already 21, from Sweden, who knows what the college season looks like? Any chance they immediately sign him and loan him to a SWE team?

Off the board, very overage, mediocre production.

P.S. Mark Seidel of the North American Central Scouting Independent Bureau gave the Oilers credit for the Tullio pick: “Two of the biggest steals of the Draft went back to back. Ty Tullio (NACS rank-52) & Evan Vierling (NACS rank-43) went to Edmonton & NYR. Teams will regret passing on these kids numerous times. Both kids will have a chip on their shoulder & those franchises hit the jackpot.”