From takeout to gas prices, how to protect yourself from rising inflation

As parts of the world begin to eye the end of the COVID-19 pandemic, consumers are starting to grapple with a phenomenon that has long failed to make headlines: inflation.

In the U.S., the annual rate of inflation reached 4.2 per cent in April, the biggest 12-month jump since 2008. In Canada, the latest available numbers show consumer prices rising by 2.2 per cent year-over-year in March, double the annual rate recorded in February.

On both sides of the border, much of those annual inflation increases are amplified by comparisons with figures from the spring of 2020, the early days of the pandemic when the prices of many goods and services plunged amid a collapse in global demand.

But as the world economy begins to re-emerge from the COVID-19 slump, economists say we may be in for several months of rapid price increases. And if you’re shopping for goods that have been affected by pandemic-linked shortages and logistics logjam, the pinch to your wallet could be particularly painful.

Rising inflation is rattling financial markets and could prompt central banks to raise interest rates faster than planned, a move that will increases costs for some debtors.

Whether you’re spending, investing or borrowing, here’s what you should know about rising inflation and what you can do to protect yourself from it. 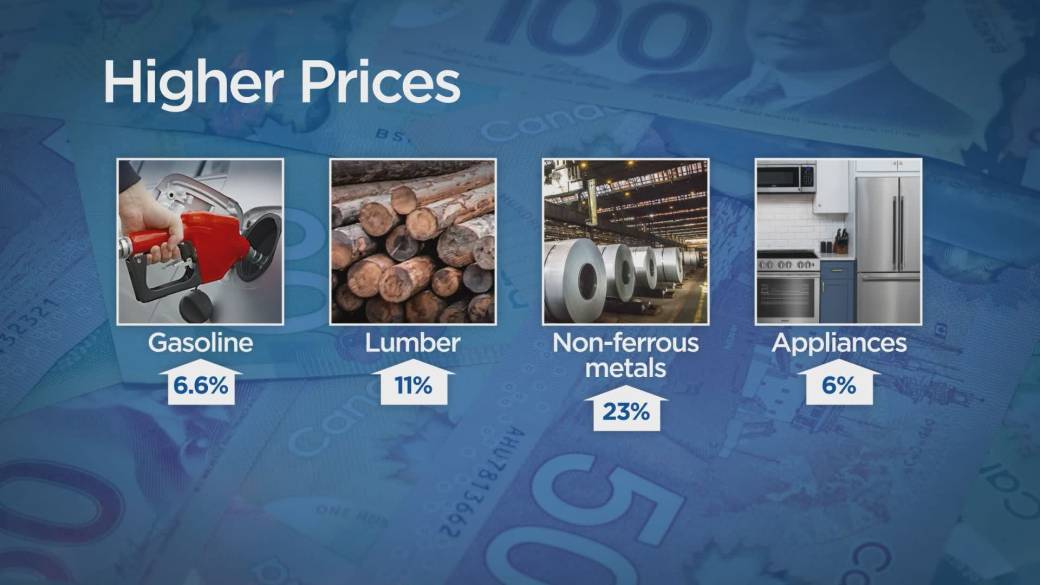 
What’s pushing up prices and how long will it last?

Avery Shenfeld is unfazed by the latest inflation numbers.

For April, May and June, year-over-year comparisons will be heavily skewed by the low prices recorded during the same months last year, at the height of the first wave of the pandemic, he notes.

The price of gasoline, for example, was more than 35 per cent higher on average in March 2021 compared with March 2020. But Canadians aren’t really spending that much more to fill their tanks than they did two years ago, Shenfeld says.

Still, some parts of the economy are seeing “real” inflation, he adds.

“If you’re trying to build that deck, for example, in your backyard, you’ll notice how much lumber is,” Shenfeld says.

The cost of the most common lumber used in home construction more than quadrupled in the 12 months leading to April 30, according to Madison’s Lumber Reporter. The price spike is due to tight supply after sawmills in Canada and the U.S. curtailed production at the onset of the pandemic in anticipation of a housing bust that never materialized. Instead, the health emergency has fuelled demand for both houses and home renovations, creating a historic shortage.

A similar phenomenon is at play in the automotive market. When consumer demand for cars and trucks plunged at the start of the health emergency, automakers around the globe rushed to scale down production, which included dialing back their orders of semiconductors, essential components of electronic devices that have are also vital for new vehicles’ infotainment modules, engines and fuel management systems. 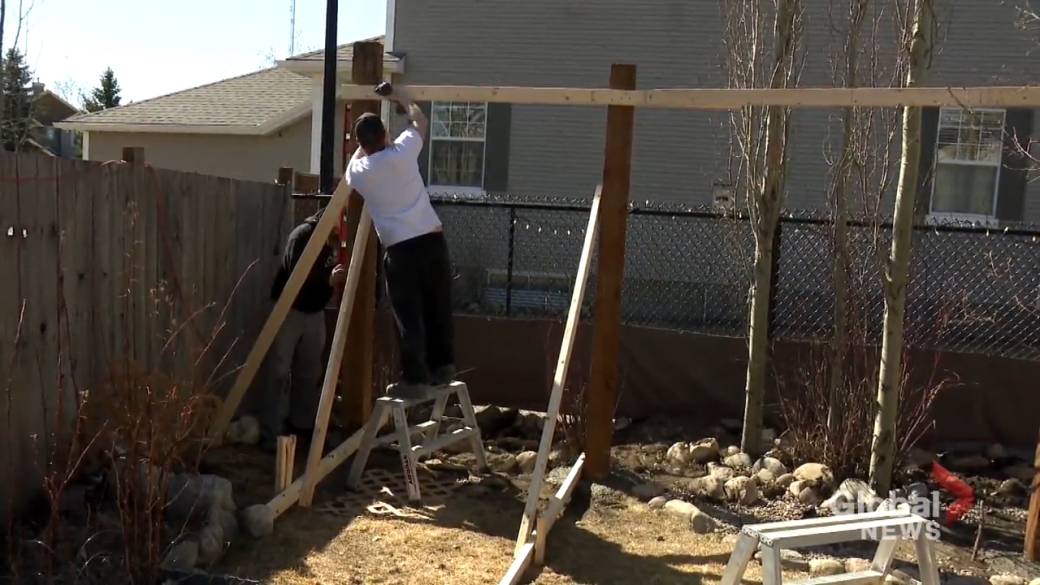 At the same time, though, as people heeded lockdown and stay-at-home orders, demand for tablets, laptops and cloud-computing services soared, quickly filling the semiconductor demand gap left by the auto sector.

Now that consumers in several parts of the world are once again in the mood to buy cars and trucks, automakers are struggling to get their hands on enough chips.

The dearth of semiconductors is causing production delays and pushing up prices for both new and used vehicles. In Canada, the average price of a new car now tops $40,000, according to data from J.D. Power Canada. For used vehicles, Canadians are paying more than $25,000 on average, according to a recent analysis by Canadian Black Book.

Other production and shipping snafus tied to the pandemic are affecting the prices of some foodstuff and raw materials, Shenfeld says.

“This is really not a Canadian story. It’s a story of the global economy waking up and putting a little pressure on prices,” he adds.

Still, some things are still cheaper than in pre-pandemic times. Canadians, for example, are still paying less for clothing and footwear, with prices down more than five per cent in March compared to the same month a year ago.

Also, the good news for consumers north of the border is that the Canadian dollar has strengthened considerably thanks to a resurgence of demand for metals, energy and forestry products from China, which is leading the global economic recovery. The commodity boom has helped lift the value of the loonie, which has been steadily trading at above 81 U.S. cents since early May.

This, in turn, is tempering the impact of global inflationary pressures in Canada, Shenfeld notes. For example, while higher inflation south of the border makes U.S. imports more expensive, a stronger Canadian dollar counteracts that effect to an extent.

Read more:
Why a strong Canadian dollar isn’t an excuse to indulge in ‘retail therapy’

Also, many economists expect the current bout of inflation will be only temporary. Shenfeld sees inflation in the high two-per-cent range for much of the rest of the year. But come late 2021 or early 2022, Canada’s inflation rate should come down to around two per cent, where the Bank of Canada wants it to be, he adds. 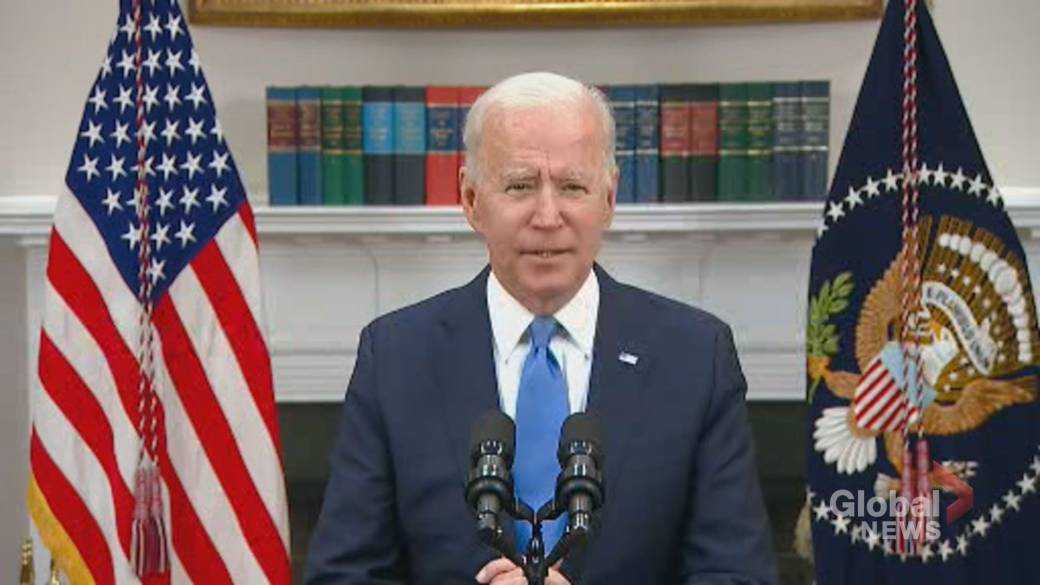 0:24
Biden urges Americans against panic-buying in the wake of Colonial Pipeline cyberattack

This inflationary spell may not last long, but that doesn’t mean you should let it bite you in the wallet.

The first thing you can do to protect your bottom line is take a closer look at what you spend on food, says personal finance expert Rubina Ahmed-Haq.

Canadians throw away around a quarter of the food they buy, she says. But meal planning and sticking to your grocery list at the store will help you cut down both your waste and your food bill, she says.

If you want to go one step further, switch up your meal-prep repertoire and add more vegetarian recipes, Ahmed-Haq adds. Meat will generally be the priciest line item in your grocery bill, she says.

“If you are really trying to save money, one of the ways you can do that is by making the majority of your meals plant-based,” she says.

You should watch your takeout orders, too. While the price of food purchased from stores was up 1.8 per cent in March compared to the same month a year ago, that figure was a whopping 3.2 per cent for food from fast food and take-out restaurants, according to Statistics Canada.

Read more:
‘There’s a lot of pent-up demand’: Is it time to book your post-COVID-19 travel?

That doesn’t mean you should give up on ordering in, one of the few treats we’re allowed to have in the pandemic, Ahmed-Haq says. Instead, consider ditching your food-delivery apps and picking up the food yourself, if you can, she adds.

That will save both you and the restaurant the cost of having the order delivered by a third-party service. You spend less and, at the same time, more of your dollars go to support your favourite local eateries, she notes.

You should also watch your spending when it comes to fixing or sprucing up your home, Ahmed-Haq says. If you’re facing an urgent home repair or project that cannot wait, you probably can’t do much to avoid higher prices but you can plan for them, she says.

If lumber is pushing up your reno costs, be sure to budget realistically and come up with a plan to pay off whatever you borrowed on your line of credit in a few years, she says.

If you’re hoping to primp your backyard for the summer, consider checking whether sought-after items like patio furniture are available second-hand from site like Facebook Marketplace and eBay, says Ahmed-Haq. 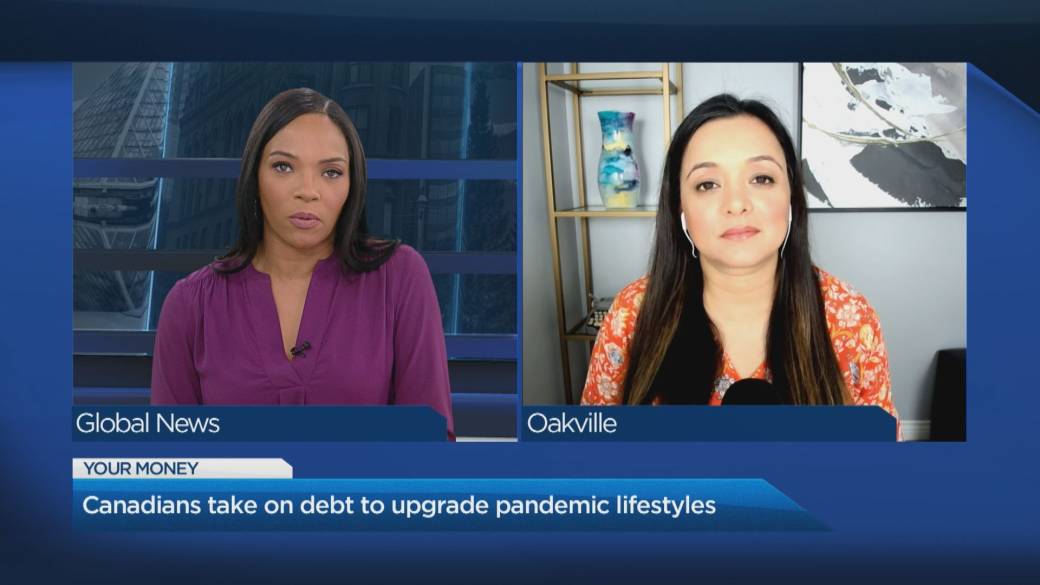 4:33
Taking on record debt during the pandemic? A finance expert shares tips and insights

Taking on record debt during the pandemic? A finance expert shares tips and insights – Feb 25, 2021


What higher inflation means for your debt and investments

Steeper inflation doesn’t just mean higher prices. It also has implications for your debt and investments.

Stronger-than-expected inflation, for example, could prompt the Bank of Canada to revise its timeline for lifting interest rates. Canada’s central bank has repeatedly telegraphed it would keep interest rates at the current low until 2023, provided economic conditions evolved roughly according to its expectations. But the bank changed its tone recently, saying a rate hike might come as early as late 2022.

The climb from rock-bottom to pre-pandemic levels will be gradual — and even before COVID-19 Canada’s interest rates were low by historical standards. Still, rising rates will push up costs for borrowers.

The first to feel the pinch will be those with loans carrying variable rates, such as floating-rate mortgages and most lines of credit, which move up or down with the general level of interest rates in the economy.

If you’ve been borrowing through a home equity line of credit, it may be worth inquiring with your bank about locking in and turning your variable interest rate to a fixed rate, says Stephanie Douglas, partner and portfolio manager at Harris Douglas Asset Management.

In general, if you have some extra money, it may be a good idea to pay off your debt faster, starting with the debt with the highest interest rate, says Ahmed-Haq.

“By putting that money into your line of credit, for example, you’re immediately going to improve your financial situation,” she says.

When it comes to investing, having some stocks in your portfolio can help you keep ahead of inflation, Douglas says.

“Stocks have been a good long-term hedge against inflation,” she says.

If you’re concerned about whether your savings will keep pace with inflation, you could ask a financial adviser to run some long-term scenarios showing how your investments would perform in different inflation scenarios, Douglas says.

Whatever you do, though, resist the temptation to spend or invest all or part of your rainy-day fund, she adds.

“Right now it’s painful for a lot of people to be sitting in cash (with) interest rates being as low as they are,” she says.

Still, you never know when the next emergency might come, and when bad luck strikes, it’s essential to have a cash cushion to help soften the blow, she says.

Previous articleCOVID-19 vaccinators: Meet the healthcare workers who are doling out shots
Next articleFamily doctors say they can answer COVID-19 vaccine questions after Trudeau recommendation