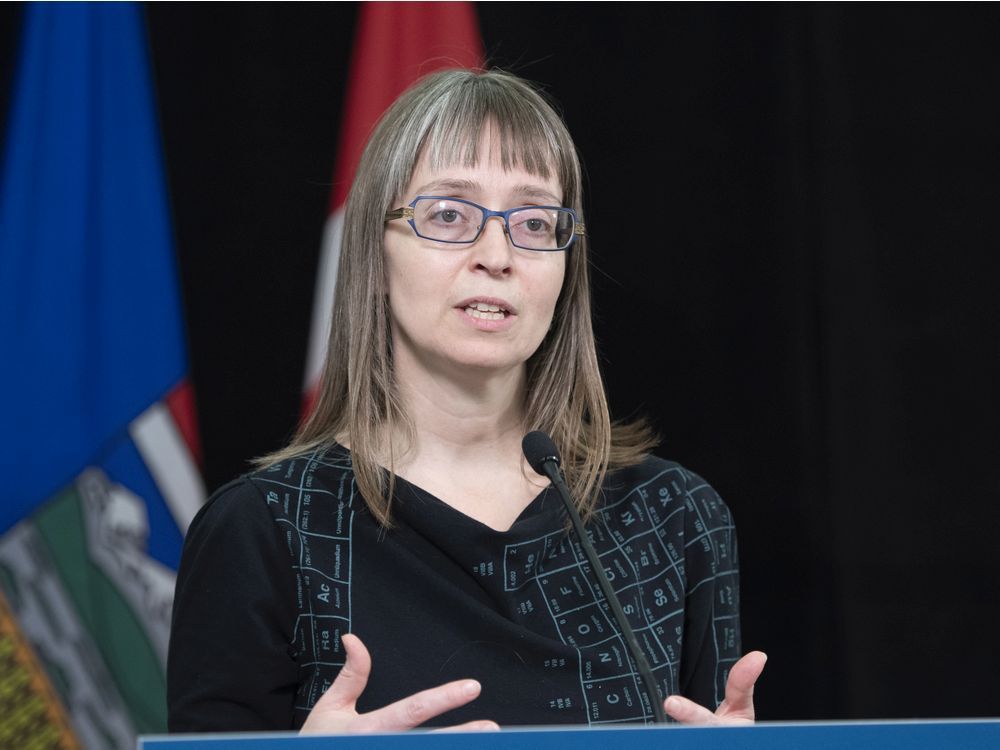 Alberta’s top doctor is urging the public to co-operate with contact tracers after the province identified close to 1,000 new cases of COVID-19 over the Thanksgiving weekend.

Dr. Deena Hinshaw, the province’s chief medical officer of health, said Tuesday she has received reports of people being unwilling to share who they have been in contact with, or where they may have been exposed to the virus and where they have been while infectious, when contacted by provincial officials who are attempting to trace cases back to their origins.

“It is understandable that people are tired of COVID-19 and angry at the ways that their lives have been disrupted. Unfortunately, choosing not to work with contact tracers does not make that better,” said Hinshaw. “It makes it worse if we are not able to trace contacts and prevent the virus from spreading.”

The call for co-operation came as Hinshaw announced 961 new cases across Alberta over the long weekend — 236 cases were identified on Friday, 259 on Saturday, 246 on Sunday and 220 on Monday. The province completed more than 58,000 COVID-19 tests over that same time period.

The Edmonton Zone, which includes the capital and surrounding communities, continues to be home to the majority of active cases, with 1,444. The city of Edmonton has 1,226 cases and is under ‘enhanced’ precautions.

She said mandatory restrictions will be implemented if hospitalizations rise by five per cent over two weeks or if more than 50 per cent of COVID-19 designated intensive care unit beds become occupied.

“Right now, the ICU beds that are in the system for COVID patients, the number is 70. We’re sitting at 13 COVID patients in ICU right now,” said Hinshaw on Tuesday.

Alberta hospitals are treating a total of 97 COVID-19 patients. Hinshaw also announced four related deaths over the weekend, including a woman in her 50s linked to the outbreak at the Millwoods Shepherd’s Care Centre.

A total of 54 residents and 31 staff at the Mill Woods facility have tested positive and seven people have died in the outbreak, the Shepherd’s Care website said Tuesday.

The government’s website lists 51 Edmonton schools that are under a watch or outbreak classification. Hinshaw said there are active alerts or outbreaks in 209 schools across Alberta, marking nine per cent of schools that have at least two cases.

Meanwhile, Fort Saskatchewan’s mandatory mask bylaw went into effect Tuesday as 15 active cases were reported in the community, passing the bylaw’s threshold of 10.

Across the country, there are 19,741 active cases, show the latest numbers from Health Canada. Since the start of the pandemic, there have been 9,654 related deaths in Canada. Globally, there have been 37,704,153 confirmed cases and 1,079,029 deaths, the World Health Organization reports.