The absence of Oscar Klefbom for the entirety of the 2021 season left a gaping void in Edmonton Oilers’ top four. While Klefbom’s fellow left-side workhorse Darnell Nurse answered the bell by taking on an even bigger role in all situations and righty Tyson Barrie did a solid job filling in on the powerplay, at no point during the season did the Oilers have a “true” 2LD.

Want proof? Adam Larsson defined the second pairing on the right side, ranking a solid third on the club in even-strength ice time behind the first pairing of Nurse and Barrie. But in the absence of Klefbom, his regular blueline mate of several years, Larsson played with a hodge-podge of partners during his 934 minutes at 5v5:

The minutes with Nurse were never as an all-game pairing but shifts here and there, primarily with the Oilers defending a lead late in games. All the other guys shown in bold played some full games with Larsson, even as none of them was a full-time regular in the line-up. Each dressed for anywhere between 10 and 35 games for the Oilers and with one exception spent 20+ games as a healthy scratch or on injured reserve.

All but one of the group was with the Oilers (or their taxi squad) all season long. The latecomer, added at the trade deadline, was Dmitry Kulikov, acquired for a fourth-round draft pick in 2022 to help shore up that suspect second pairing.

The trade was classic Ken Holland, who traded picks and/or prospects to acquire veteran d-men at the deadline any time his Detroit Red Wings were in playoff contention. Which is to say, most years he was there. Jamie Macoun was 36 when Holland brought him on board, Dmitri Mironov 32, Chris Chelios 37, Ulf Samuelsson 35, Todd Gill 34, Jiri Slegr 30, Mathieu Schneider 33, Cory Cross 35, Brad Stuart “just” 28 but über-experienced.

Holland has carried on in similar vein since his arrival in Edmonton. His first deadline trade in 2020 was for 34-year-old Mike Green, then in the season just past his only addition was the 30-year-old Kulikov, who was acquired for a fourth-round pick in 2022. 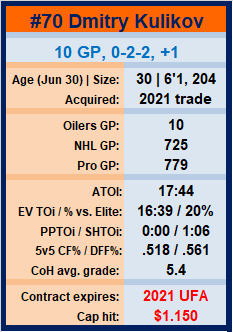 It took a couple of weeks for the Russian to get his work visa in order, clear quarantine, and then wait out a break in the Oilers’ schedule. Once he was inserted in the line-up he was paired with Larsson and there he remained, playing some 90% of his subsequent ice time with the Swede on the de facto shutdown pairing. Whether the two were tailor-made for each other or simply presented the best of several suboptimal choices for the second pairing is a question better asked of Dave Tippett.

One thing obvious from this distance: Tippett (and Holland) likes his veterans, and Kulikov certainly qualifies on that front. Selected 14th overall by Florida back in 2009, he made the jump directly to the NHL that fall and has never looked back. He’s now a 12-year veteran of 725 NHL games, never having played a minute in the AHL. For much of that time he’s been a top-four, averaging 19:54 per game throughout his career.

Things changed for Kulikov in the season just passed. Previously a $4.3 million player who had signed identical 3-year, $13 million pacts in July of 2014 and 2017, he went to market in October and waited two long weeks into free agency before signing a one-year, $1.15 million deal with New Jersey. It turned out to be a decent bargain for the team, as Kulikov played close to 20 minutes a night in a regular pairing with P.K. Subban that was the least of the Devils’ many problems.

We delved into Kulikov’s performance in Jersey at the time of the trade, writing: “This chart from PuckIQ shows the site’s keynote stat Danger Fenwick (a blend of shot quantity and quality) on the X axis, and overall Quality of Competition on the Y. Long story short, upper right is the place to be”: 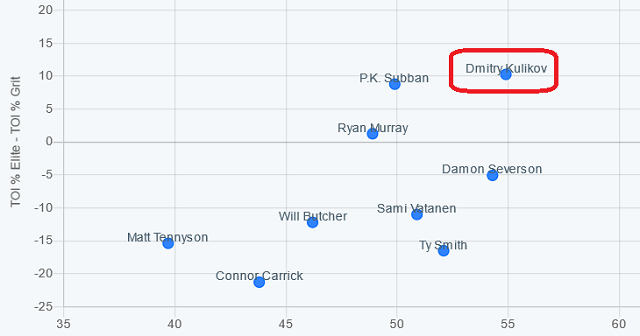 There was an odd turnaround in Edmonton in one aspect of that, not the other. 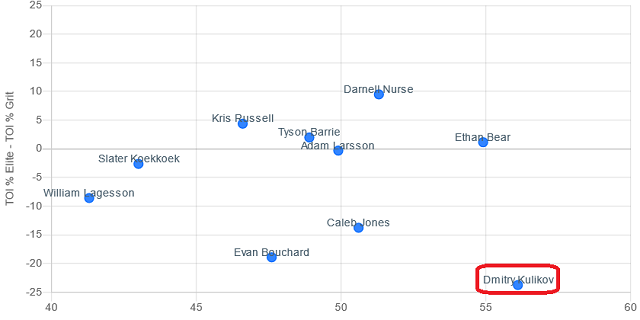 Kulikov played 10 games as an Oiler, and similarly produced fine shot shares, however his QualComm fell through the floor. My take is that the Oilers were playing actual weak, or at least weakened, teams down the stretch, running through a series of games against Vancouver Canucks who were missing their elite performer Elias Pettersson, and Montreal Canadiens who were down Brendan Gallagher and others. Overall, Kulikov played stalwart defence, though his puck movement left something to be desired. The Oilers outscored their opponents 7-5 during his 163 minutes at 5v5, which translated on a per-60 basis to 2.57 goals for, just 1.84 against. Under 20 of those minutes were with McDavid.

But then came the playoffs, and things went south for both player and team. Kulikov played the first three games and had his struggles on the defensive side of the puck. Twice — on Tucker Poolman’s game-tying goal in Game 1 and Paul Stastny’s overtime winner in Game 2 — he was unable to gap up and prevent an outside shot, screening his own netminder on at least one of them. Then late in Game 3, he made a horrid turnover deep in Edmonton territory that resulted in a critical Jets goal, a contributing factor to an Oilers collapse from a late 4-1 lead that continues to sting to this day. By Game 4 Dave Tippett had seen enough, benching Kulikov and replacing him with Kris Russell. But the damage couldn’t be undone.

For Kulikov it was the latest chapter in what is a pretty sorry post-season record. Over the course of his career he’s played in 6 different post-season series, with his team losing every last one of those series. He’s been on the winning side of just 8 of his 27 career playoff games.

That’s not all on the player, obviously. He’s played on some fairly middling teams over the years — the Panthers, the Jets, and of course (sigh) the Oilers — who collectively weren’t able to get the job done in the post-season. But it’s fair to say that “playoff success” isn’t a bullet point on his résumé.

Chances are his camp will be updating said résumé for another stint on the free agent market this summer. But first it might come in handy for a conversation with Holland. Before the Oilers let him walk, they’ll need to consider that he was probably the closest thing they had to a 2LD all season long. Between his two clubs he averaged 19:10 TOi per game. His price tag was pretty reasonable, and while his teams performed well on the possession meter on his watch, there is nothing in his boxcar stats (48 GP, 0-4-4, -3) that screams “big raise coming”.

As insurance policies go, the Oilers could do worse. Trouble for Kulikov is, they’ve already signed Russell for another year at $1.25 million to fill a similar role.

It’s certainly fair to conclude that left defence remains a position of weakness. One that could be solved very fast indeed with the return of a healthy Klefbom in 2021-22, though that is far from assured. A return for the first part of the season seems a long shot, and who knows how long it might take him to return to his usual form, if ever. Many pundits are concluding the Oil are unlikely to protect Klef for the Seattle expansion draft, furthermore that the Kraken are unlikely to take him. Too much uncertainty.

And while promising players develop within the team (Jones, Lagesson) or in the system (Philip Broberg, Dmitri Samorukov), how many of those guys are primed for top four minutes in the fall? Closest to my eye is Jones, and his season was erratic enough that he stayed in the press box for the entire playoffs, and clearly has yet to earn the trust of the coaching staff. Besides, there’s the very real possibility that he’ll be the man taken in the Seattle expansion draft.

So it behooves Ken Holland to consider the UFA market for left-shot d-men, be they internal players like Kulikov or Koekkoek (who we’ll consider next time), or those who eventually trickle through to the open market on July 28. Possible targets capable of top four minutes include Jamie Oleksiak of Dallas Stars or Winnipeg’s Derek Forbort to name a couple.

It’s not the only problem Ken Holland needs to address this summer, but it’s certainly one of them. Barring unexpectedly good news on the Klefbom front, it’s not a matter that can wait to be solved with a draft pick at next year’s trade deadline.

LEAVINS: 9 Things, #1 being the Nuge dilemma

McCURDY: Tyson Barrie can help the Oilers whether he re-signs in Edmonton or not

STAPLES: What two deals not done say about Ken Holland

McCURDY: Haas heads back to Switzerland