In Search Of… the method to Ken Holland's madness re: Edmonton Oilers' goaltending

For all the general hue and outcry about the signing, not much has been made of the fact that Smith took a significant cut in pay to return to the Oilers. While the veteran netminder inked a contract that was very similar in structure to the bonus-laden 35+ contract he signed in the summer of 2019, it was drastically scaled back in every component, with a couple of bonus triggers removed entirely. This table derived from the excellent PuckPedia.com: 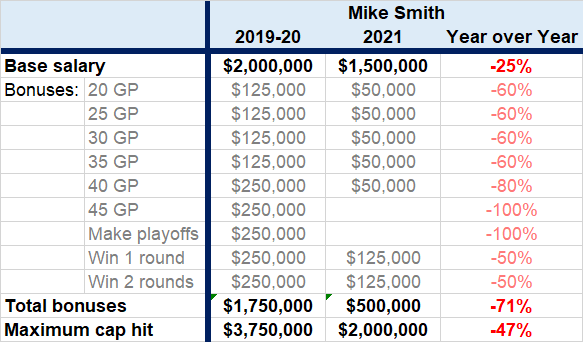 No other way to put it than Mike Smith took a serious haircut. Hard as that may be to visualize!

Bottom line is that last season’s base salary of $2.0 million is next year’s maximum possible… and that only if the Oilers go deep in the playoffs with Smith playing at least 2 games in each successful series. Those are bonuses any team would happily shell out.

Pay cut aside, the fact that the 45-GP bonus has been removed entirely suggests that expectations of Smith’s role have been reduced. Whereas last year he competed with Koskinen on equal footing, it’s reasonable to expect the Finn to emerge as the true #1 in 2021, with Smith to play the experienced backup role. Perhaps a 60/40 split, though the condensed schedule will ensure both men get plenty of work.

There was no such clear hierarchy in 2019-20. Despite Koskinen posting significantly better percentages, the two men shared the load equally with Smith holding his own on the results front as well:

The major difference between the two big stoppers? One was signed by Peter Chiarelli, and one wasn’t.

That difference will be magnified in 2021. We don’t know the bottom line, but we do know the range.

Overall, the Oilers goaltending budget will be reduced to the range of $6.0 to $6.5 million, a little below 8% of the salary cap. Last season that figure potentially might have exceeded 10%, and when the dust settled came in at $7.213 million, about 9%.

A reasonable expectation is that about $1 million will be shaved from the budget, all of that reduction coming on Smith’s side of the equation. His new pact is a pretty modest one, all things considered. It’s not exactly the three-year, $11 million extension the Oilers gave a 36-year-old Dwayne Roloson early in the salary cap era. Smith, whose fiery presence oft reminds this observer of Roli, is on a way cheaper ticket and a diminishing one at that.

While the aging stopper’s return wasn’t universally popular, I found the response to this Twitter poll by my Cult of Hockey colleague David Staples to be both interesting and on point:

Previous articleLawyer who killed teen while drunk driving sentenced to 3 1/2 years
Next articleAddicted: How Edmonton could solve its meth problem