What are we to make of the latest round of injury news regarding the Edmonton Oilers?

Word is now out from various sources that: a) Kailer Yamamoto wasn’t seriously injured against Calgary, reports TSN’s Jason Gregor b) Slater Koekkoek is out with a broken collarbone, c) Oilers prospect Dmitri Samorukov in Moscow is out for the year with a shoulder in surgery, and d) Theodor Lennstrom has been recalled from the Bakersfield Condors.

1. Much of this news isn’t good, especially the Samorukov injury, but none of it is dire to the fortunes of this 2020-21 team, which I always felt was the best team in the Canadian division and is now playing like that kind of top-ranked squad.

2. The Oilers have excellent depth this year on defence and on wing, but little depth at centre and in net. They could withstand an injury to a winger like Yamamoto, though it’s excellent news that he could well play on Tuesday. He’s not been Edmonton’s most effective winger this year — like his centre Leon Draisaitl, Yamo has missed playing with Ryan Nugent-Hopkins this year — but he’s been a solid two-way player.

3. Koekkoek has been playing OK hockey in a limited role for the Oilers. He’s a decent puck mover and defender. We can certainly see that coach Dave Tippett had some faith in him, playing Koekkoek ahead of Caleb Jones. When it comes to Edmonton’s nine deep roster of d-men, I’d rank Koekkoek behind Evan Bouchard, William Lagesson and Jones, and maybe about even with Kris Russell.

4. Caleb Jones should now move into the line-up — and I’m more than good with that. Jones remains a strong NHL prospect. He has had some success at the NHL level and he needs to play. He’s a smart puck mover and sound enough defender, who apparently got a bit out of favour with his Edmonton coaches for not being adept enough at blocking shots on the penalty kill. I expect that the lesson has been learned and we will see Jones throwing himself in front of shots when he’s back in the line-up.

5. I watched plenty of Lennstrom earlier his year in Sweden. It was my opinion that he could help the Oilers this year, given his excellent speed and agility and hockey smarts. He’s the Gaetan Haas of d-men, not big, but fast, and able to make solid reads of the play, both on the attack and defence. He can be bowled over now and then by bigger players, so he’ll have to be ready for that kind of challenge. But he’s a much better two-way prospect than Joel Persson, in that he’s got NHL-level speed, which gives him a chance to make good here.

6. Again, I’m not so worried about injuries on defence and wing. Joakim Nygard hasn’t played much, but he’s a solid bet on the wing, as is Tyler Benson, though like Lennstrom, Benson would have to go through a 14-day quarantine if he’s recalled from the AHL. Devin Shore, Kyle Turris and Patrick Russell can also hold their own at the NHL level on the wing. At centre, though, the Oilers will be in a pickle if one of their top four centres get hurt, as neither Shore nor Turris has demonstrated the ability to succeed at centre in the NHL in 2021. Of course, if either Connor McDavid or Leon Draisaitl were to miss some games, Edmonton could always resort to playing Ryan Nugent-Hopkins at centre, or maybe even Dominik Kahun, a smart positional defender. In net, things are even more dire when it comes to depth, so it’s imperative that both Mike Smith and Mikko Koskinen stay healthy this year.

7. Finally we get to Samorukov, who was ranked fourth overall for Oilers prospects by the Cult of Hockey in December, with only Evan Bouchard, Philip Broberg and Dylan Holloway ahead of him. Samorukov was playing solid, safe, sound and smart hockey in a Top 4 role for CSKA of the KHL this year. He was +24 goals plus-minus in 48 games. It’s somewhat harrowing to hear he has a shoulder injury, what with what the team is now facing with Oscar Klefbom. One hopes that Samorukov’s injury is not so serious and that his development can continue next season, most likely with him returning to Bakersfield of the AHL for a second season. He had been counted on in Bakersfield later this spring when the KHL seasons wrapped up, but that’s not to be. 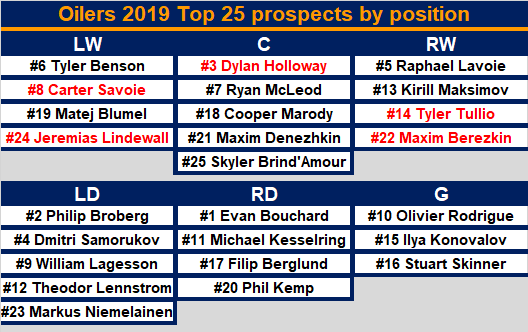 P.S. This will put a smile on the face of any Oilers fan: