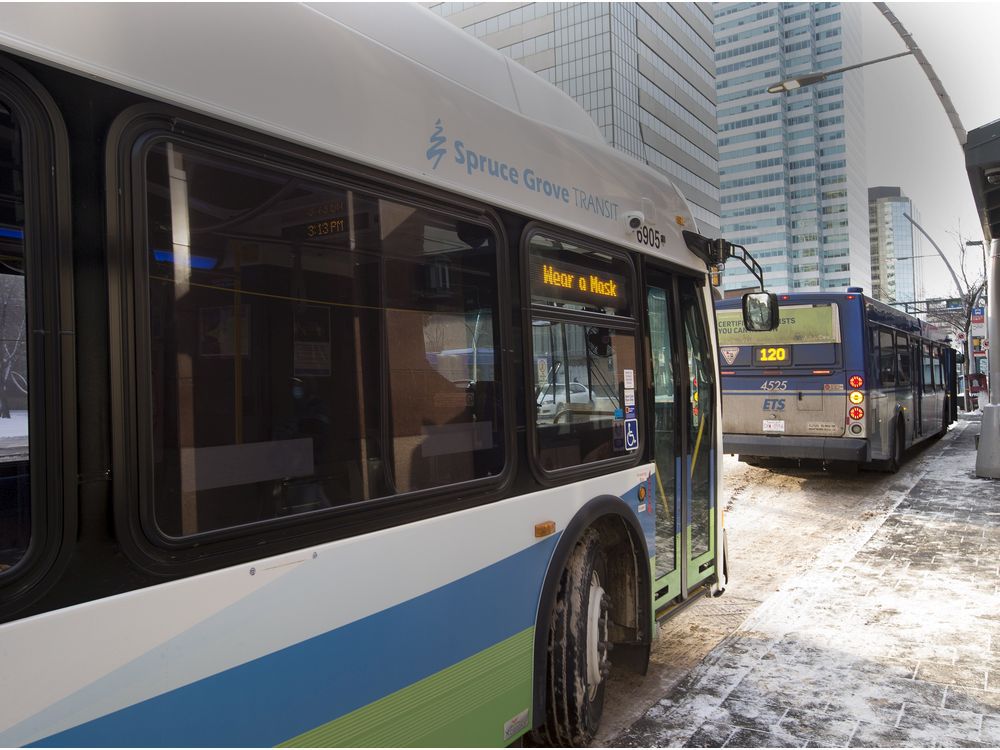 Almost 1,600 transit workers in Edmonton and St. Albert have signed a petition opposing the move to regional transit service.

Amalgamated Transit Union Local 569 president Steve Bradshaw submitted the petition via email to all councillors and mayors of the eight member municipalities Friday morning. Bradshaw said the union is calling for certainty that the regional transit commission, having just received legal approval from the province in January, isn’t privatized.

About 70 per cent of affected union employees signed the petition that was also on display on a giant banner outside Edmonton City Hall.

Ward 10 Coun. Michael Walters, who also serves as vice-chairman of the commission board, said labour relations discussions still need to happen but the plan has always been continue the partnership with the union. The commission sent a letter to the union outlining a willingness to engage with them but hasn’t heard back, Walters said.

“Mr. Bradshaw appears to be manufacturing this boogeyman that this is privatization when it’s never been that,” he said. “I’m confused about why he would continue to try to frighten his members and City of Edmonton employees about something that’s not real.”

The goal in moving forward with regional transit is to provide more efficient transit service across the Edmonton region and bring down the costs, Walters said, noting the commission wants to make the new system work for all parties.

Once the system is in full swing, projected to be in 2026, it is estimated regional service will save $3.9 million annually and reduce redundancy by 615 service hours per week.

The commission board, made up of elected officials from member municipalities, is currently in the process of hiring a CEO which Bradshaw said is where some of his concerns lie.

People with years of experience in operating transit systems didn’t make the shortlist, Bradshaw said, causing him to fear it is moving in a more corporate direction.

“The main fear with privatization is it will set up a degradation of service, it will impact our communities because of poor service, it will impact our taxpayers because they’re going to end up paying amounts to unlimited liabilities for this system,” he said. “On the union’s level, of course, we’re very concerned for our members’ jobs and our members’ pay and benefits.”

Once a CEO is hired, the commission will work to roll out the first wave of regional service in mid to late 2022. Originally the regional transit discussion involved 13 municipalities in the Edmonton metropolitan area, but eight have signed on to continue with the commission. Regional transit will provide service to Edmonton, St. Albert, Spruce Grove, Stony Plain, Beaumont, the City of Leduc, Fort Saskatchewan and Devon.

Previous articleDynamite Line experiment over after one game, William Lagesson back in line-up
Next articleDr. David Schindler, world renowned environmental conservationist, dead at 80