More than 85% of Atlantic Canadians plan to get COVID-19 vaccination: survey

The majority of Atlantic Canadians are likely to get vaccinated for COVID-19 , according to a new survey.

The survey found 86 per cent of respondents say they are likely to get vaccinated or have already had one or both doses.

Specifically, 65 per cent said they will definitely get the vaccine when available.

Respondents in Newfoundland and Labrador had the strongest likelihood to get vaccinated, at 82 per cent.

In contrast, PEI had the highest percentage of respondents who said they were probably or definitely not going to get vaccinated — at 12 per cent.

The survey also asked people how concerned they were about the AstraZeneca vaccine. On Wednesday, Health Canada said an extremely rare blood clotting syndrome may be linked to the vaccine.

“Results suggest there is a significant level of concern across the region, with over one-half of the population indicating so,” the survey notes.

Twenty-three per cent of respondents said they are extremely concerned. Women were more like to be concerned than men, with 65 per cent compared to 49 per cent.

Among those who said they were planning to get vaccinated, more than one-third of residents said they will not choose the AstraZeneca vaccine if offered to them.

People over the age of 55 were more likely to say they were willing to receive this vaccine, compared to middle-aged or younger residents.

As well, the survey found respondents were “moderately satisfied” with their provincial governments’ vaccine rollouts. 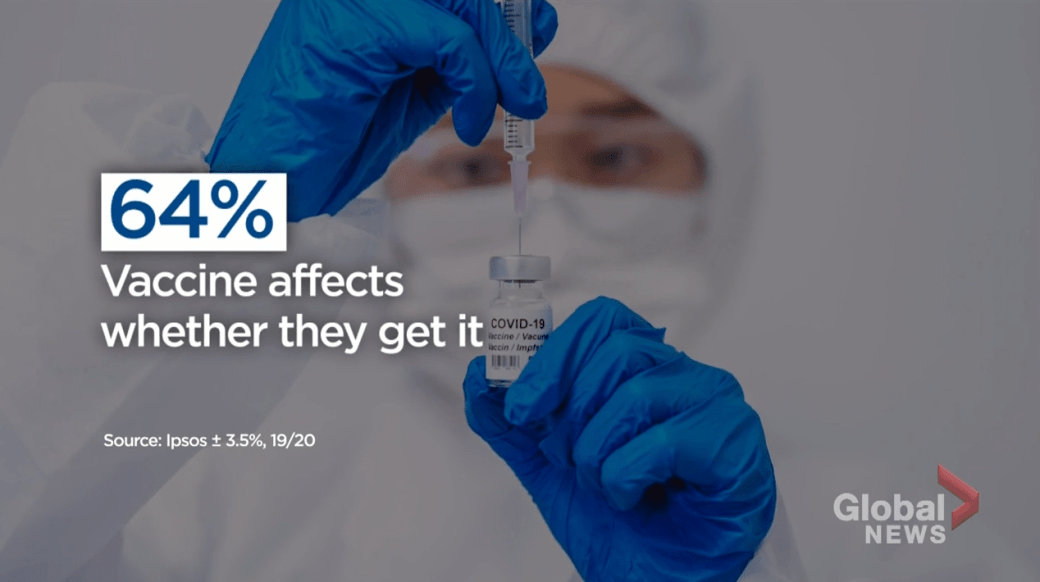 3:02
Ipsos poll: Type of COVID-19 vaccine instrumental in whether or Canadians will get it

Ipsos poll: Type of COVID-19 vaccine instrumental in whether or Canadians will get it

PEI residents reported being more positive than the other provinces.

The survey was conducted between March 30 and April 7, with 2,782 Atlantic Canadians who are part of Narrative Research’s online panel.

In accordance with CRIC Public Opinion Research Standards, a margin of error is not applied because the survey used a non-probability sample, Narrative Research said.