Jujhar Khaira is back. The solid two-way player that Edmonton Oilers fans and observers have seen in spurts over the years is once against bringing his “A” game to the Edmonton Oilers.

His line with Josh Archibald and Tyler Ennis is hitting hard, passing well, creating goals and scoring chances at even strengthm and not giving up much in their own zone.

For his part, Khaira appears to have newfound confidence carrying the puck, no longer handling it like it was an orb of fear and dread, but carrying like he owns it, like he’s going to take a chance to make a play no matter what, as if nothing could fall, damn the torpedos.

It’s the first strong signal that the Oilers just might have a strong third line to complement the McDavid and Draisaitl lines, and such is the ardour of the fans that they’re already coming up with nicknames for the fresh-out-of-the-package trio.

The Sweet Khaira Line anyone? How about the Nitty Gritty Dirt Line?

Like every Oilers fan, I hope this line sticks together long enough that a nickname sticks, mainly because that will be a sure sign that the trio is consistently getting the job done, not just for three or four games, but for months at a time. Is it too much to ask? Maybe. Probably, if only because NHL lines rarely stay together and also because Khaira has rarely been able to put together a consistent run of strong two-way hockey.

In my monthly performance rankings of the Oilers of the 2017-18, Khaira ranked ninth overall for forwards on the team, just behind Milan Lucic, Drake Caggiula and Ryan Strome and just ahead of Zack Kassian, Mike Cammalleri and Mark Letestu (with only Khaira and Kassian remaining on the team from that group).

Here’s how my colleague Kurt Leavins summed up Khaira’s play that year:  “We are left to ponder going forward whether J.J. can take yet another stride this year. There are signs that say yes. But it would also be wise to set expectations on the modest side. After all, following a strong training camp last fall, Khaira’s play suffered early. In fact, he was a healthy scratch in 10 of the Oilers first 15 games. His coach suggested that it was as if Jujhar stopped to take a breath and maybe got a little too comfortable. But to his credit, Khaira took his benching to heart and turned his season around.”

Did that long benching make the difference in turning around Khaira’s game? It’s a possibility, for sure.

Last season, 2019-20, Khaira was strong on the PK but struggled to score and defend at even strength, where he was prone to giving away the puck. In our post-season assessment of him, both my colleague Bruce McCurdy and I suggested he was a bubble player. He might be worth keeping around if the Oilers did not bring back another solid PK specialist who had struggled at even strength, Riley Sheahan.

Oilers coaches have gone to the whip a number of times with Khaira, giving him little ice time in games, or sending him to the press box. But Jan. 11 this year was the first time the Oilers actually put Khaira on waivers. Any other NHL could have had him.

And I didn’t see too many, if any, Oilers fans or observers decrying the move, either.

Khaira, it seemed, hard worn out his welcome in Edmonton.

Yet here we are, with Khaira once again on one of his streaks of effective and consistent two-way play.

What to make of it?

Perhaps it was the shocking triple wake-up call of getting waived, being unclaimed and being benched that awoke Khaira to bring his “A” game.  Maybe he’s the kind of player who need that kind of proverbial kick to the proverbial butt to be motivated to do well.

But we can’t read Khaira’s mind. We don’t know what’s motivating him.

Could it be just as likely that he was always serious about playing solid hockey but he lacked the confidence to assert himself with the puck and he’s somehow found that now? Could it be self-belief and the willingness to rake a risk was his main issue?

Again, we can’t know that. We’re not inside his head.

The Mystery of Khaira’s solid play revealed: Getting complementary linemates

I’m going to set aside some kind of psychological explanation here, even as that might be the real answer, and go with something that is much less of a mystery, the make-up of Khaira’s lines both now and last year.

When Khaira and Riley Sheahan — two big, low-to-medium skilled players who aren’t known for their agility — were out on the ice together at even strength, the Oilers scored six goals and and gave up 18 in 2019-20.

That’s a goals for percentage of 25%.

That’s a rancid result, but still the coaches had them out there for 298 even strength minutes, far too long for either players’ good or the team’s good.

Without Khaira at even strength, Sheahan was much better, 15 goals for and 19 against, GF 48%. Sheahan did his best work in January 2020 teamed with two smaller, fast, hard-working wingers, Joakim Nygard and Josh Archibald. They only got 69 even strength minutes together, but they were two goals for, two goals against, and gave the Oil the best third line play the team saw all year.

It was a hint of what might work on a third line, one big centre. with two smaller, fast and active wingers.

Let’s go back to 2017-18, when Khaira had his previous longest run of strong play. He had most of his success with fast linemates: Drake Caggiula, four goals for, three against in 133 minutes; Ryan Strome, 13 goals for, 11 against, in 264 mintues. He less success when he was with big, less mobile players like Milan Lucic, Zack Kassian and Anton Slepyshev.

See a trend here? We’re dealing with small sample sizes but maybe the key here for Sheahan last year, for Khaira in 2017-18, and for Khaira again this year is to team them up with smaller, aggressive, fast and hard working players.

Tyler Ennis and Josh Archibald are just that for Khaira.

Ennis handles the puck with tremendous skill, carries the puck up ice with relative ease, and makes excellent decisions in the offensive end. Archibald buzzes here, there and everywhere, hitting hard as he goes, with strong fundamental defence all over the ice.

Not having to be the main puck carrier, and having strong defensive cover in Archibald, Khaira is free to do what he does best, which is work with defenders in the low slot to protect the Edmonton net and work passing plays with his linemates, while not being expected to carry any kind of offensive load.

Any holes in this theory? Yes.

Khaira also played strong hockey in the playoffs with two bigger and slower power forward-type wingers, James Neal and Alex Chiasson. It’s not like Khaira can never play well with other bigs. He obviously can.

But I’m going to suggest that he and Sheahan were a particularly poor mix at even strength, that their games had too much in common in terms of strengths and weaknesses, and that smaller, fast, agile and aggressive wingers work well with big J.J., very well in fact.

In their 29 minutes together so far they trio has four goals for and none against.

But can they do it for a stretch of 10 or 20 or 30 games? That will test my theory, even as the early indicators are positive. 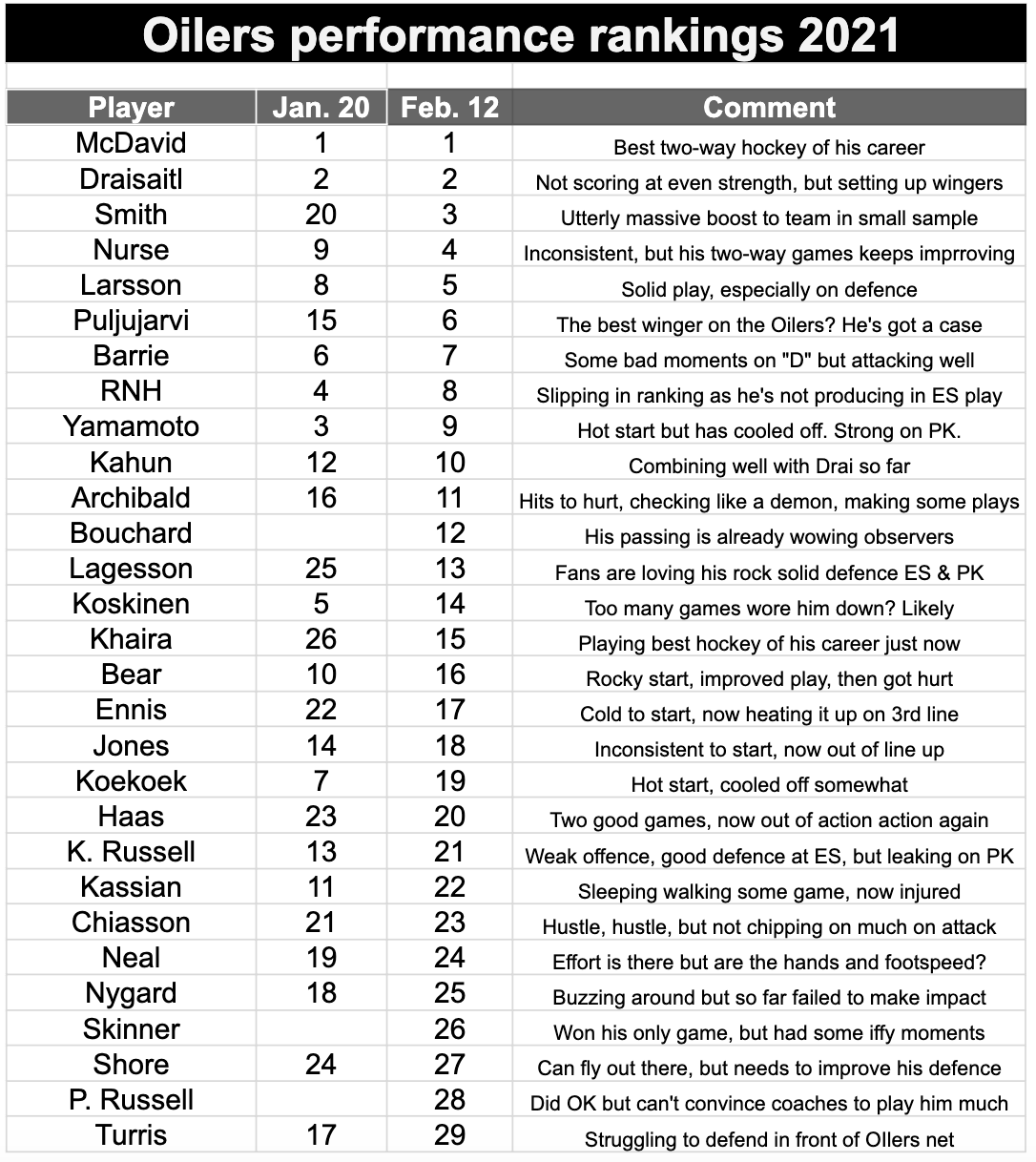 LEAVINS: Mike Smith aces the test in wins over Habs

McCURDY: Oilers sweep 4 from the Senators