Mysteries of the Edmonton Oilers revealed: Why Leon Draisaitl's even strength goal scoring has dried up

Today I’m going to tell you a few shocking facts, and when you hear them, they’re going to change the way you see the Edmonton Oilers this season.

Let me start by saving that as great a shooter as he is, Leon Draisaitl is going to have a hard time battling for the NHL’s lead in goals scored this year, mainly because his even strength goal scoring has dried up and it’s unlikely to improve with Edmonton’s current line combinations.

In 71 games last season, Draisaitl had 93 Grade A shots on net at even strength. He potted 27 goals.

That was the sixth highest even strength goals production in the league last year. Impressive.

This year in 13 games, he has just two Grade A shots on net at even strength, along with two goals.

This is the first shocking fact, that for all his shooting and scoring prowess, Draisaitl has just these two Grade A shots so far.

The lack of dangerous shots on net doesn’t scream out that Draisaitl is suddenly going to start scoring a bunch at even strength, does it?

Oh, it could happen he’ll go on a run. Maybe he’ll just decide to shoot more. But the dynamics of his current line work against him taking on a sniper’s role and a sniper’s production.

What is going on with Draisaitl?

There’s an obvious explanation to Draisaitl’s even strength scoring deficit this year. He’s gone from being cast in something of a shooter’s role in 2019-20 to being more of a set up man in 2020-21. He’s carrying the puck up ice, drawing defenders to him, then trying to set up Dominik Kahun and Kailer Yamamoto.

This is new for Draisaitl, at least compared to his usage last season.

In 2019-20, when he was pounding in the wicked shots and goals galore at even strength, he was the trigger man on his line.

With Connor McDavid and Zack Kassian for the first 41 games, he scored 16 goals on 53 Grade A shots.

With Ryan Nugent Hopkins and Kailer Yamamoto on the Dynamite Line for 27 games, he scored 11 goals on 40 Grade A shots.

After that, in an effort to get a more balanced attack, Edmonton Oilers coach Dave Tippett broke up that line in the 69th game of the year, for the playoffs, and for all of this year.

Draisaitl is with two skilled attackers in Kahun and Yamamoto this year, but he’s evidently taking it on himself to be the playmaker of the line. It’s also the case that he misses the sweet passes from McDavid and RNH, and that neither Kahun nor Yamamoto have the ability to consistently find him open for a shot like McDavid and RNH did.

I doubt Draisaitl is going to score as regularly as he did last year if he remains on a line with Kahun and Yamamoto. He’s simply not getting the great chances to snipe a one-timer.

If it’s any consolation (and it is), Draisaitl is still putting up plenty of points at even strength, 13 in 13 games. It’s just that he’s getting assists, not goals. 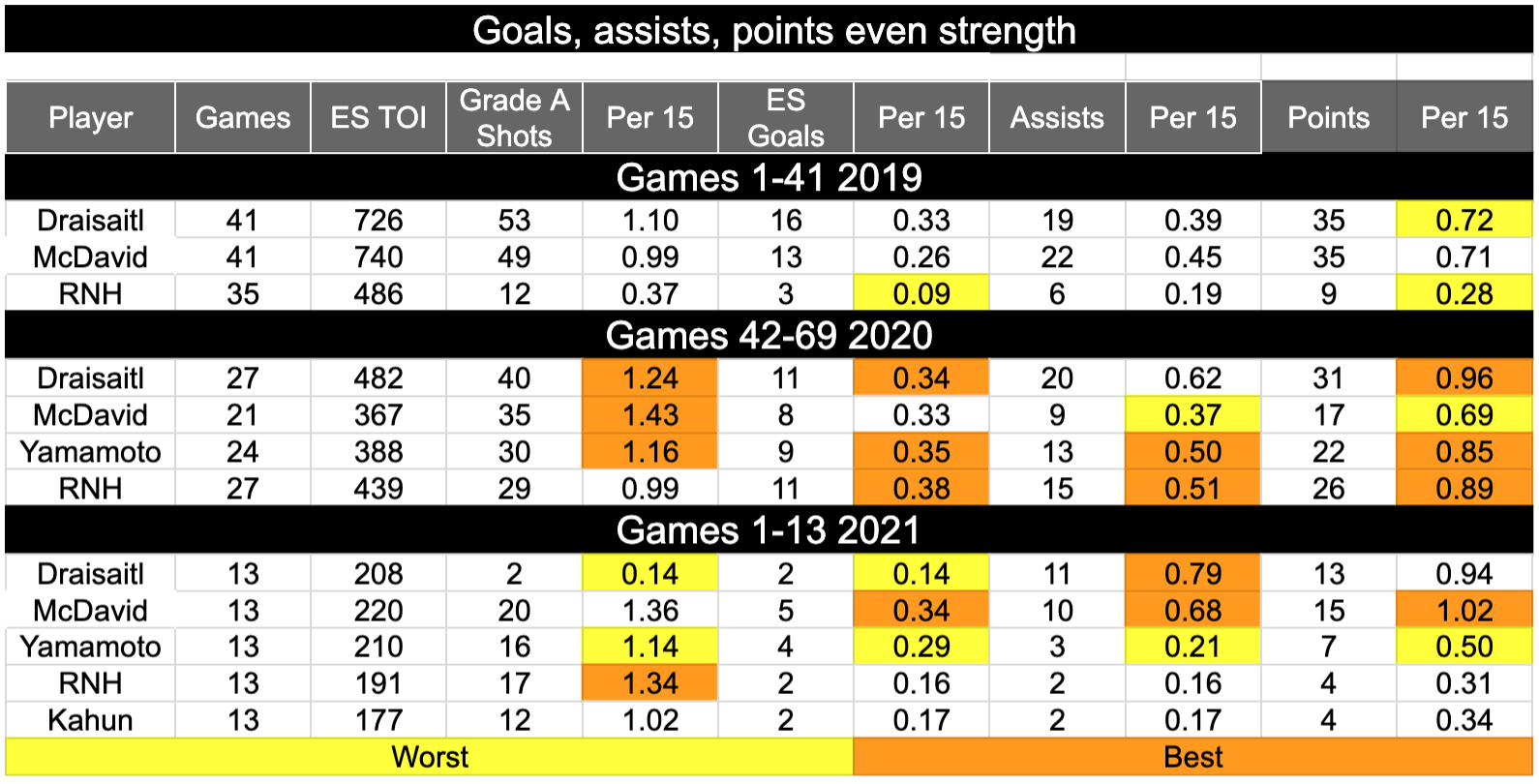 RNH cast as The Sniper? Hmmm

Now we get to something just as interesting — the fact that RNH is being cast in Draisaitl’s old role as the sniper on McDavid’s wing — but it’s not yet working out for Nugent-Hopkins either.

He’s not yet finding a way to score, certainly not as much as Draisaitl did when he was with McDavid, and not as much as either Draisaitl nor Nugent-Hopkins himself did when they were together on the Dynamite Line.

Let’s look at three segments of RNH’s recent play, first when he was the centre on the Oil’s second line in the first 41 games of last season. In that role, RNH struggled. He had just nine even strength points in 35 games (compared to 35 each for McDavid and Draisaitl on the top line in that same time period). He got off just 12 Grade A shots on net at even strength and scored just three goals.

Everything changed, though, after Christmas 2019 when RNH was moved to play with Draisaitl and Yamamoto. The trio clicked, with RNH constantly setting up Draisaitl, Draisaitl often returning the favour, and Yamamoto winning pucks and feasting on their rebounds.

In their 27 games together, RNH got 29 Grade A shots, 11 goals and 26 points at even strength, the best run of even strength points production of his career.

You might think that RNH would score even better playing with McDavid, but that’s not the case. He’s still getting off great shots. In 13 games this year, he’s had 17 Grade A shots at even strength. That’s a higher rate of Grade A even strength shots than Draisaitl had playing with McDavid last year, and that’s the second real shocker for me, that RNH has been able to fire so many dangerous shots on net.

The only problem? He’s got just two goals on all those wicked shots.

The good news, most likely, is that the Nuge has just had bad puck luck and he’s soon going start scoring.

Or, just maybe, RNH really isn’t cut out for the sniper role, that he’s best off as the primary playmaker on his line, something which isn’t going to happen so long as he plays with McDavid, who dominates the puck.

Solutions? You know where this is going…

To get Draisaitl scoring at even strength — if that is something the Oilers want to have happen — it’s no real solution to put Draisaitl and McDavid back together again. That will likely get Draisaitl pounding in more goals, yes.

But the Oilers were an iffy team in their first 41 games last year, with just 20 wins and 21 losses. When it comes to both even strength attacking and defending, they’re a significantly better team with Draisaitl and McDavid centreing their own lines. They create more goals and Grade A chances at even strength, and they give up fewer goals and Grade A chances against.

The solution is most definitely not re-uniting Draisaitl and McDavid.

Best bet? Kahun is a strong passer and good defender. He rarely makes a bad play with the puck. He’d fit in nicely beside McDavid. On the right side with those two, Jesse Puljujarvi is looking like a good fit. He and McDavid are starting to pass the puck and combine well. Puljujarvi has the speed to keep up with McDavid and he’s also more of a sniper than RNH is. When McDavid looks to pass, he can set up either Puljujarvi or Kahun, and the goals will come that way for all of them. You know McDavid is going to get his. He always does, no matter who his linemates are.

To get the most out of RNH and Draisaitl, though, they should be together on the same line. RNH is a natural playmaker, while Draisaitl is a multi-talented attacker, but he does his best work when he’s getting service from a brilliant and unselfish passer of the puck. That player is RNH.

I suspect that McDavid’s line will score as much as ever, if not more, with Kahun and Puljujarvi.

And I have no doubt whatsoever that the Dynamite Line will again be magic with RNH setting up Draisaitl and Yamamoto buzzing here, there and everywhere.

As for McDavid, he’s playing the best two-way hockey of his career right now. He’s the NHL’s best attacker and at least as good a defender as Draisaitl. If Puljujarvi keeps coming on, they could form a magical combination, with Kahun acting as the glue player on that top line.

Work for you? It will work for the Oilers.