Just two weeks have passed since the last time the Edmonton Oilers played Calgary Flames on Hockey Night in Canada, but a whole lot has changed in that time. That night a sloppy Edmonton squad allowed one goal in the first period, two in the second, and three in the third to drop a 6-4 decision to their provincial rivals. It was a poor defensive effort in the Saddledome that featured a number of five alarm fires, not enough of which were snuffed out by Mikko Koskinen, playing his 12th game of Edmonton ‘s first 13.

The Oilers took their road show east after that, activated Mike Smith from injured reserve, and immediately started to play a tighter brand of hockey. They won the final three games of the trip, scoring just 3 goals in each game but allowing 1, 2 and 0.

Upon their return home this past Monday, the Oilers resumed their swashbuckling ways, scoring 5 against the Winnipeg Jets but allowing 6 for a painful regulation defeat. But another bounceback ensued, in which it took the Oilers two games to match that output of 5 goals scored, yet that was enough to win both games, in regulation no less. First a taut 3-2 win in the rematch against the Jets, then a 2-1 decision in the Saddledome last night in one of the most close-to-the-vest Battles of Alberta in memory.

To recap: in their last 7 games the Oilers have scored 4 or more goals just twice, and lost both without so much as a Bettman Point to show for it. In the others they scored 3 or fewer each time, and won all 5 games, every one of them in regulation. It’s as if they’re trying to prove that old Craig MacTavish maxim, “it’s not what you make, it’s what you leave”.

Along the way the Oilers broke a 28-game losing skein dating back to 2017 in games where neither Connor McDavid nor Leon Draisaitl found the scoresheet, then repeated the feat last night. While those prolific scorers have cooled off a bit from their joint red-hot start, the scoring has come from further down the line-up, where lines led by Jujhar Khaira and, more recently, Gaetan Haas, have chipped in with some key goals. Meanwhile the defence corps has been on fire, leading the NHL in goals and points produced from the back end.

That is all the more remarkable when you consider that last year’s top-scoring blueliner, Oscar Klefbom, has missed the entire season, while the #3 producer Ethan Bear has missed the last 9 games. In their absence newcomers Tyson Barrie and recent call-up Evan Bouchard have brought their offensive chops, while key returnee Darnell Nurse has raised his already solid output to another level. This morning both Barrie and Nurse find themselves among the top 5 scorers among NHL rearguards, while Nurse is tied for first in goals. 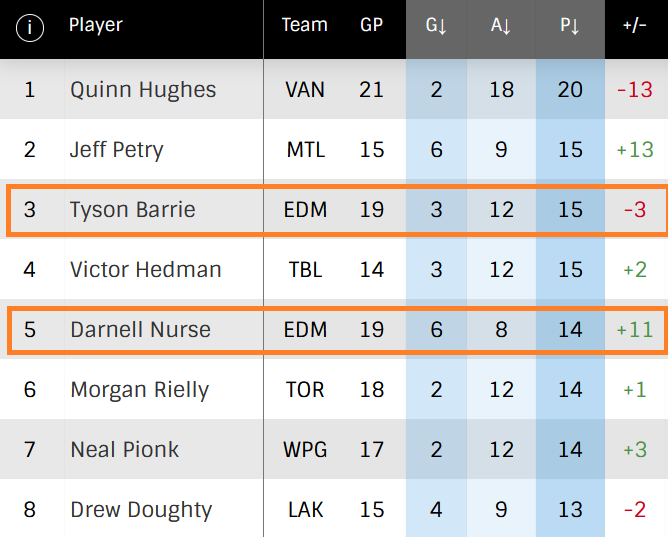 Barrie had a rough start in Edmonton, bleeding goals against at an alarming rate, but has stepped up his play at both ends of the ice since being paired with Nurse in the wake of the Bear injury. Both men have been logging heavy ice time, each posting a game north of 30 minutes this week. Last night they combined to set up Jesse Puljujarvi for the game’s first goal, then took care of business at the other end of the ice. Nurse had a couple of key shot blocks on the penalty kill, while Barrie tipped a highly dangerous Matthew Tkachuk attempt into the netting with under two minutes to play and the Calgary goalie on the bench.

Speaking of goalies, the oft-maligned Smith has delivered the goods since his return to action Feb 08. He’s started 5 of 6 games since then, winning 4 of them. While his .940 save percentage to this point is obviously unsustainable, Oilers fans have been treated to “the good Mike Smith” so far.  He didn’t have the answers in the high-event loss to Winnipeg on Monday; otherwise he’s been solid between the pipes and when handling the puck. He also likely deserves some credit for organizing the defence, which with that one exception has done an excellent job of limiting Grade A scoring chances in recent games.

In tonight’s back-to-back scenario Smith will take a seat on the bench, with Koskinen to draw in. The big Finn delivered his best game of the season in his last start, a 40-save effort in a 3-2 win at Ottawa, also in a back-to-back that followed Smith’s season debut. By all appearances over his three years in Edmonton, Koskinen is at his best in a two-goalie system, and he is definitively in one now after carrying the load for the first month. He should be rested and ready tonight. 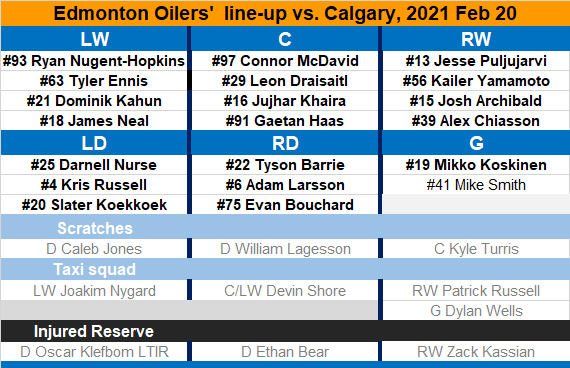 Coach Dave Tippett confirmed at this morning’s media avail that Koskinen would get the start. Otherwise his stated preference is to keep the line-up that ground out the win in Calgary last night. But that might be out of his control. In the coach’s words:

“We’ve got a couple of injuries we’re monitoring this morning, they’re getting treatment now. I’d like to go back to the same line-up but we’ll see if there’s a couple changes that are necessary because of injury.”

When pressed on the possibility that Caleb Jones might draw in, Tippett said that one of the players being monitored is a defenceman, but remained tight-lipped as to who that might be.

Game time is 8pm MST, the late slot on Hockey Night in Canada.