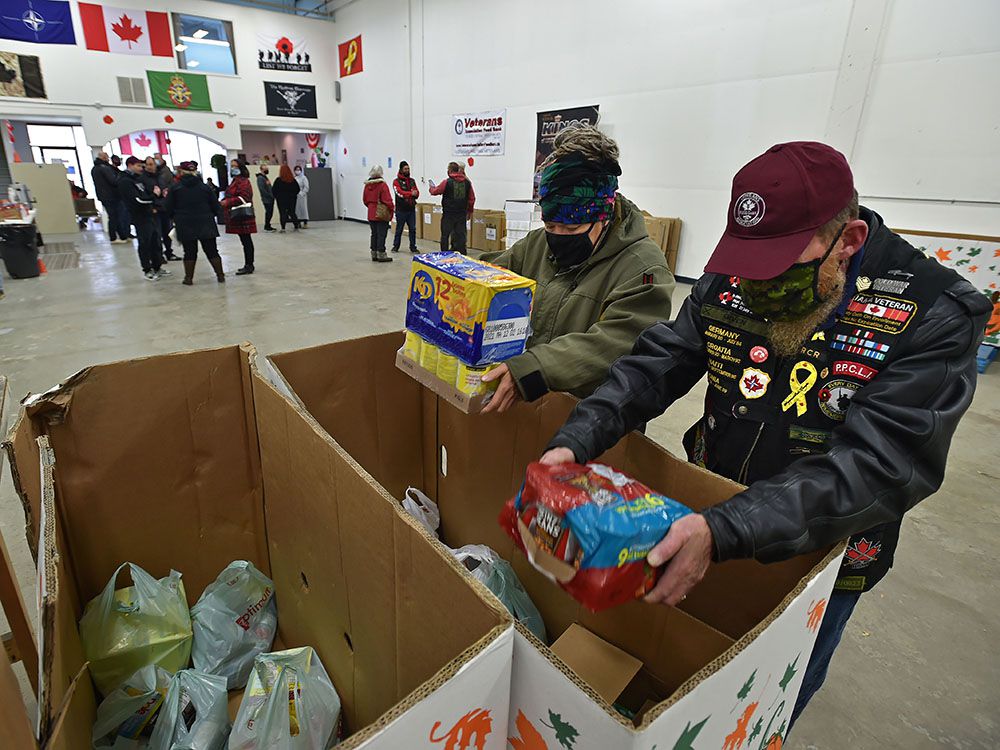 Kennedy, who left the service in 1997, said he  suffered from depression and anxiety, which caused him to isolate, and it’s that type of veterans the food bank is reaching out to help.

“The hard part is getting the veterans in the door. So many veterans are suffering mentally or physically that they can’t get out (of their home). Part of the trauma of PTSD is you self-isolate,” Kennedy said.

All it takes is for a veteran to make a phone call, or maybe someone makes that call for them, for the bank to offer assistance, Kennedy added.

“This is my opportunity to give back to the veterans in the community,” he said.

The community is starting to take notice. Kennedy said  a 72-year-old veteran that showed to help up after hearing about the place at his local Legion.

“He’s been out of the military for years,” Kennedy said. “That’s the veteran community — it doesn’t matter what decade you served in, we all have each other’s six.”

The Veterans Association Food Bank started in Calgary and was incorporated in 2018 as a not-for-profit. Kennedy said it has really grown and he hopes the Edmonton site does just as well.

The food bank runs on non-perishable food donations but will be accepting perishable in the future once, it gets a cooler or freezer.

It also accepts financial donations. Kennedy said they’ve already received a donation to upgrade the flooring in the new facility.

Donations are accepted at the location as well as on its website at www.veteransassociationfoodbank.ca, or by calling 403-367-8387.

A mix of sun and cloud. Becoming sunny near noon. High 27
Read more

The remaining artifacts — a Treaty 8 Headman’s suit, pants and jacket, two fish boxes, and a canoe — will be on loan to...
Read more
Facebook
Instagram
RSS
Twitter