No place to go or hide: A deeper look into how vulnerable Montreal women are trying to survive

With the pandemic entering its second year and tight restrictions still in place in Montreal, women who are experiencing poverty, homelessness and domestic violence have had to face the additional burden of a relentless public health crisis over the past 12 months.

The city, which has been hard hit by COVID-19 since last March, has been thrashed by the first and second waves of the virus — with a staggering number of infections, deaths and hospitalizations prompting lockdowns and a virtual emptying out of the once bustling downtown core.

The effects of the public health crisis have been hard on Montrealers, as they have on most Canadians, as isolation, closures, sanitary measures and orders to work from home drag on — but it has been particularly tough for people in difficult or dangerous situations, especially women.

Global News spoke to two local organizations about the reality on the ground and how they are navigating the complexity of homelessness and violence affecting women compounded by the pandemic.

‘We’re here to help you’: Shield of Athena on the front lines of domestic violence

When the novel coronavirus first bore down on Quebec last March, a wave of shutdowns and stay-at-home orders were swift. The Shield of Athena, a network of lifeline services for victims of domestic violence in Montreal and Laval, never closed and found ways to keep helping women — even with an initial chill in calls.

Melpa Kamateros, executive director, explains that at the beginning of the pandemic, women experiencing violence at home were also grappling with the uncertainty of leaving and contracting the virus.

“People were being quarantined, they didn’t know whether they could catch this thing, how they could protect themselves from this thing,” she said. “Underlying issues became more reinforced with the pandemic.”

“I mean it’s not easy for a woman to go and access services anyway if she’s a victim. There’s a lot of shame, silence, fear, terror around this subject.”

Last spring when most Quebecers were stuck at home because of lockdown measures, women experiencing abuse had little opportunity or privacy to seek help or leave. The health crisis was an added layer to an already dangerous situation for those suffering from abuse in the environment meant to shield them from the virus.

In some cases, women were calling from their bathrooms — the only quiet place where their abusive husband or partner couldn’t hear them, according to Kamateros.

The initial hesitancy to reach out to organizations and shelters hasn’t meant fewer clients, however.

“All over Canada, there was an initial lull and then boom, it just picked up,” Kamateros said.

There has been rise in domestic violence throughout the health crisis that Kamateros says can be seen in statistics from around the world. The United Nations has called violence against women and girls a “shadow pandemic” as the COVID-19 crisis fuels social isolation and tensions caused by concerns over health, safety and financial security.

When the virus surged in October and more lockdown measures came into effect, Canadian helplines reported a jump in calls. In November, a national report published by Women’s Shelters Canada found an increase in the frequency and severity of violence against women across the country since March 2020.

Earlier this month, the province’s premier took a moment during a pandemic press briefing to address a rise in femicide and called on men to stop being violent with women. François Legault’s remarks came following the deaths of two women in their home north of Montreal in what police consider to be a double homicide.

The Shield of Athena, which provides an array of services in 17 different languages and offers a small emergency shelter, immediately shifted to offering external services online — which has been time consuming and its own challenge. This includes having video conference meetings with caseworkers, translators and clients.

“We are working harder now than we have ever worked before because we don’t have the face to face,” she said. 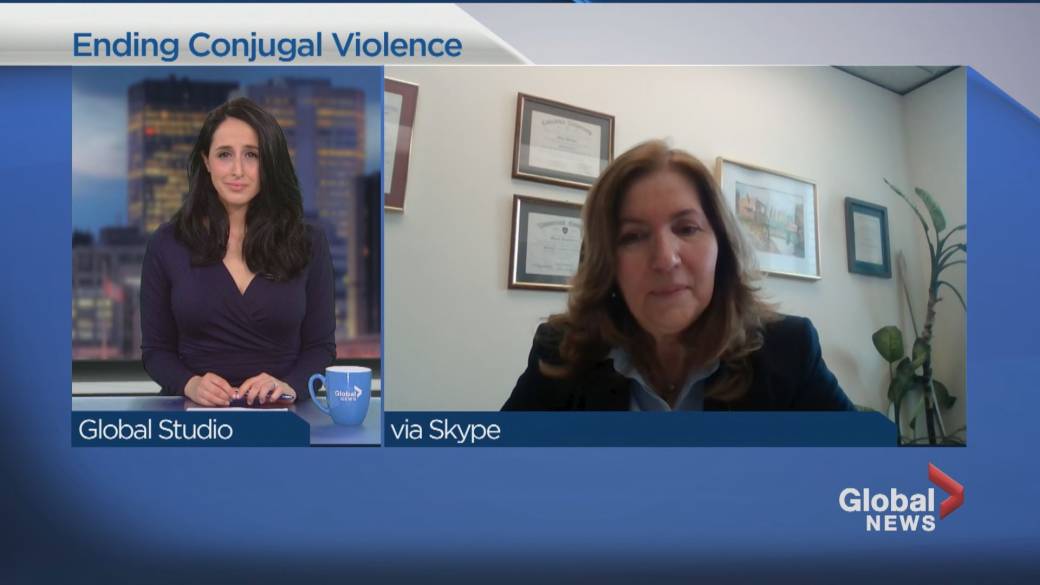 The organization also stopped their workers from travelling between offices and implemented social distancing measures to keep everyone safe. Women and their children requiring emergency shelter last summer were put up in hotels with the province’s help to keep the virus at bay.

The pandemic has changed how the Shield of Athena operates, but Kamateros says it’s important for women suffering from domestic violence to know they can still access help and services — and that it is manageable to make a plan and leave home, even if it seems impossible.

In late February, the organization launched an awareness campaign with five videos in multiple languages, with the first segment focusing on what kind of measures can be taken during the pandemic.

“We are here for you, we can help you and don’t be scared,” Kamateros said.

The health crisis has compounded the difficulties of living on the streets of Montreal, where lockdown measures have seen the city’s usually lively downtown core empty out to stop the virus from spreading.

Chez Doris, a centre that supports women experiencing homelessness and living below the poverty line, has had to adapt to the pandemic’s fallout and make difficult decisions in order to comply with health orders.

The reddish-brown house that stands on a quiet street usually sees anywhere between 1,500 to 1,800 women who are homeless or need support on an annual basis — but the executive director of the organization says the number of visits dropped by nearly 35 per cent over the past year due to restrictions.

“We’ve been visited by almost 800 unique homeless women,” Marina Boulos-Winton said. “Whereas normally our mission is to serve all women in difficulty…With the isolation, like the social distancing, has forced us to pick and choose the most vulnerable, right?”

Chez Doris has given priority to women who are homeless during the pandemic by providing beds, meals and showers to those in need. In the past year, the organization has doubled the number of its employees and, in the cold winter months, has shifted from offering day-time services to operating 24 hours per day.

But the lockdown in Montreal has made it difficult for the homeless to get by, since there is no place to go. The city has doubled the number of beds available in the city’s shelter system, but organizations say shuttered businesses and health restrictions have pushed people outdoors.

“Because of the pandemic, with the closures of malls, coffee shops — they had nowhere to go to the bathroom even. And there was nowhere to have a hot meal at dinner, so, we’ve extended our services because of that,” she said.

Over the past year, 25 per cent of clients are new to Chez Doris, according to Boulos-Winton. That is largely in part due to the forced consequences of social isolation. In some cases, a woman isn’t on her apartment lease and then has nowhere to go if her roommate asks her to leave.

“There’s nowhere to hide,” she said.

With most Montrealers sheltering from the virus at home, homeless women have also faced increased risks of violence.

As the weather grew colder, deserted streets and shuttered businesses due to the coronavirus surge meant there were fewer places and people to turn to at night, said Boulos-Winton.

“Even if a woman were to hang out in a bus shelter or at the park or go to the bathroom in a Johnny on the spot, they risk getting assaulted or raped, which happens a lot in the fall,” she said. “I mean, it still happened, but it happened before winter measures when there weren’t enough overnight shelters and it was dangerous to be caught out in the streets in the middle of the night.

“It’s obvious you’re vulnerable. You’re most likely homeless if you’re hanging around outside.”

The pandemic has not only forced Chez Doris to focus on giving priority services and shelter for homeless women, the centre has also had to adapt to the reality of physical distancing and other health measures to keep the virus from spreading.

There are plexiglass barriers surrounding beds, so clients can sleep safely, and the same shields are erected in the dining room. Chez Doris also has movable plexiglass on wheels so that it can be used where needed. The tables for meals are also separated and each one seats fewer people to respect the two-metre distance.

Surgical masks are mandatory and provided to anyone who walks through the door — and they are changed every four hours as a precaution. The organization has also hired a cleaning company to rigorously and regularly clean.

Editor’s note: If you are in a difficult situation and need help, there are resources and services available.