Novavax has made public some of the details of its January contract with the Canadian government to supply millions of doses of its coronavirus vaccine candidate if approved by the country’s regulator.

Though key details such as price per dose and penalties for missing delivery targets are redacted, the company’s filing with the U.S. Securities and Exchange Commission marks the first time a vaccine supplier’s deal with the Canadian government has been released in even a redacted form.

The Canadian government has repeatedly refused to release those contracts.

Procurement Minister Anita Anand says the seven contracts the government has signed for coveted vaccine doses include confidentiality clauses and breaking those could jeopardize the deals.

She has also refused to say whether any of the contracts signed by the government waived the right to sue in the event delivery targets are missed, as the European Union did in its contract with AstraZeneca.

The filing by Novavax does not appear to answer that question.

The contract states that the company will provide 52 million doses of its vaccine candidate with an option to purchase 24 million more, and that deliveries will take place monthly to fulfill quarterly allotments.

“Customer acknowledges that the delivery schedule may change due to the impact of several variables including, but not limited to, speed of clinical trial enrollment and accrual of events, manufacturing delays and/or timing of regulatory approval,” the contract reads.

If the company gets regulatory approval but then fails to meet quarterly deliveries, they will provide to the Canadian government what the contract describes as “the cause of the inability to supply” as well as a “good faith remedial plan.”

If the company can’t manufacture enough vaccine to meet all of its international contracts, the contract says that “Novavax shall allocate to customer (redacted) for the period of short supply.”

If the remedial plan can’t make up for the shortfall, Canada can cancel future deliveries or terminate the deal, the contract states.

It’s not clear whether Canada would incur financial penalties for cancelling.

The contract states Canada agreed to pay a redacted portion of the total cost of the vaccines upfront given the company was manufacturing them before getting regulatory approval.

Prime Minister Justin Trudeau announced earlier this year a deal with Novavax to produce vaccines at a facility in Montreal, though that will not be operational until towards the end of the year.

If the vaccine is approved before that, doses will need to be shipped from abroad. 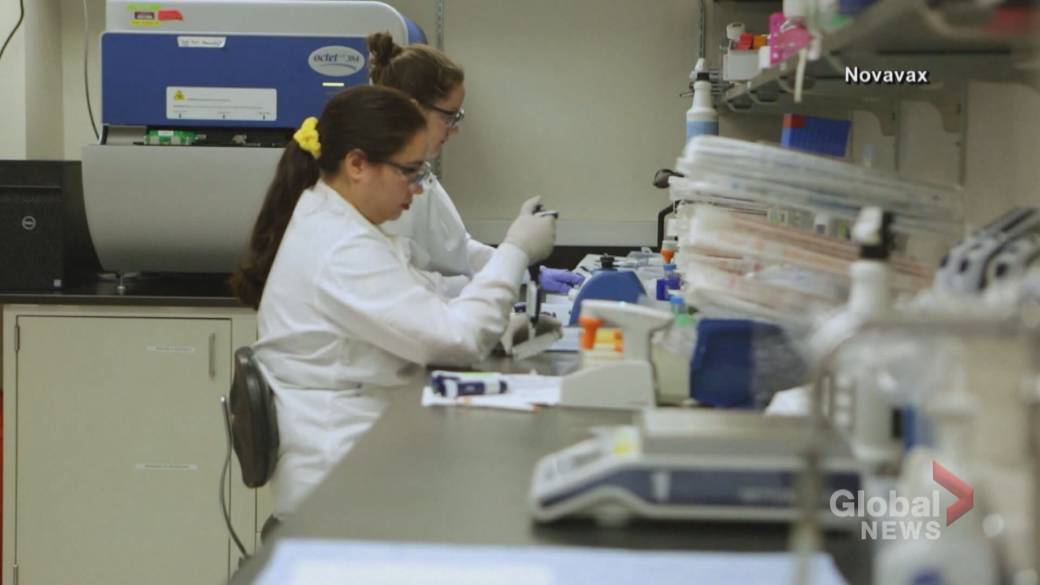 1:59Montreal facility to produce Novavax vaccine in the fight against COVID-19

Montreal facility to produce Novavax vaccine in the fight against COVID-19 – Feb 2, 2021