How well have things been going for the Edmonton Oilers lately? Consider these two facts:

That looks like a formula for victory, now doesn’t it? The Oil did in fact win 4 of the 5 games, while losing a 4-3 decision in the other, a hotly-contested affair against the Montreal Canadiens that went right to the final buzzer.

Make it 15 points for McDavid, 7 goals against the Oilers since the club returned to action after a week off that resulted from the Vancouver Canucks’ COVID outbreak. Wowsa.

That the squad has managed just 4 goals in which McDavid was not involved over that span is a concern, but the club has done such a fine job at squelching goals against that it’s a minor one. For quite some time now, the Oilers have been playing button-down hockey and counting on their two offensive drivers, McDavid and Leon Draisaitl, to be the game-breakers.

That certainly was the case in the most recent 3 games between the Oilers and Winnipeg Jets, all in the Manitoba capital, in which the Oil wore down the Jets 3-0, 6-1, 3-1. Make it 12 goals for, just 2 against, with 9 points for McDavid and 5 for Draisaitl in those games. In the process the Oilers zoomed past the Jets into second place in the North Division, and currently hold a 3-point lead with 2 games in hand. First place remains something of a pipe dream; Edmonton is 7 back of Toronto Maple Leafs, also with 2 games in hand, but they will need some outside help. The Leafs had a recent hiccup with a 5-game winless string, but have recently rediscovered their mojo and won 3 straight.

In mid-March I wrote a post about the Oilers’ improved play at keeping the puck out of their own net, identifying the return of netminder Mike Smith from injured reserve on Feb 08 as the turning point. Time for an update:

Edmonton’s offensive production continued to erode a little bit over the most recent span, but they have maintained the strong defensive record that began the day Smith returned to action. That is reflected in the statistics of both Smith and now-backup Mikko Koskinen:

Smith’s performance, and numbers, have been well documented. Koskinen had a rough start carrying the entire load in the early season, and the team in front of him was a work in progress, especially on the defensive side of the puck. Since Smith’s return, he has started just 9 games, Edmonton winning 6 of them. In his 3 losses, the Oilers scored a total of just 1 goal, so it’s pretty tough to lay those defeats on goaltending. (Not that some folks didn’t try: there was a huge buzz in Oil Country about inadequate netminding after a 3-0 loss to Toronto and a 4-0 defeat in Montreal, but those big zeroes kind of jump off the screen to this goalie sympathizer.)

Goal support is a huge factor, of course, but for this year’s Oilers goal suppression is an even bigger one: 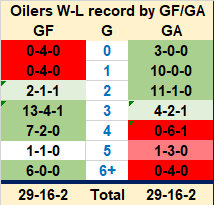 Pretty clear from this distance that Dave Tippett and his staff have been preaching the goal prevention message, and that his charges have been listening. Excellent goaltending has played its part to be sure, but defensive play has tightened up considerable. That applies to the penalty killing unit as well, which was languishing at 72.7% on Feb 07 (24th in the NHL at the time), and has been 82.8% (8th best) since.

That same date threshold — which equates to the return of Smith — resulted in an even more drastic improvement in the defensive record overall. On Feb 07, Edmonton’s record of 3.77 goals against per game ranked a lowly 29th in the NHL. Since then? 2.29, third best in the NHL behind only Vegas and the Islanders. Overall they rank a respectable 11th in the league and second in the North Division, just 0.03 behind Toronto.

…has not been announced, but will likely change little from the group that won 3-1 in Winnipeg last night. Smith will surely get the starting nod after a strong performance by Koskinen in that contest.

Calgary currently trails Edmonton by 15 points, and have just 8 left to play. An Edmonton win in either of the two-game set tonight and Saturday will ensure the Flames cannot overtake the Oilers in the standings, another step towards mathematical clinching of a playoff berth. Calgary does harbour faint hopes of overtaking Montreal for fourth place, moreover come into this game rested against an Oilers team on a back-to-back with travel. Expect another grind-it-out contest from the home team.

LEAVINS: Player grades from 3-1 win in the ‘peg

STAPLES: Does Darnell Nurse have a shot at the Norris?

LEAVINS: A further shuffle coming on the Oilers D?

Previous articleQuebec to open up vaccination to people 18 and older in next 2 weeks
Next articleTransat is issuing refunds for cancellations due to COVID-19. How to claim yours