Just a brief window between back-to-back games to do our traditional review of the Edmonton Oilers after each 10-game segment of the regular season. Over the years we have found this a useful function to cut the season down into digestible chunks that land somewhere between “last night’s game” and “the entire season to date”.

Of course, the latter description does apply when reviewing the first 10-game stretch, but as always this opening segment review will lay the groundwork for future such analyses.

So let’s do a quick data dump while these stats are current, starting with team results. We’ll start by comparing the squad’s early performance against the seven 10-game segments that were completed before the COVID curtain fell suddenly on the 2019-20 season.

The .400 points percentage is worse than all but one segment of last season, which also happened to be the lone segment with a worse PDO (combined shooting and save percentage). That is hardly a coincidence, as in the short to intermediate term percentages are always a key driver in any club’s outcomes.

The poor PDO is built on a team shooting percentage of 9.5% vs. an opponents’ Sh% of 11.0%. That’s especially suboptimal given the Oilers held an advantage of 133 to 110 in Grade A scoring chances as per our own measure here at the Cult of Hockey. Indeed, that ongoing project has this participant optimistic that the club is much better than its results have shown to this early point.

The 36 goals against, meanwhile, represent the worst segment to date in the Dave Tippett regime. It’s worth noting that the Oilers played all 10 of their games against the top four clubs in the North Division, all of whom have been averaging at least 3.3 goals per game. It is a wide open division to say the least.

Turning now to the individual side:

After a pair of unrelated happenstances saw the loss of #3 netminder Anton Forsberg to waivers, then #2 Mike Smith to injury, Mikko Koskinen saw 100% of the action through the opening ten games. He allowed 34 of those 36 goals against, the other 2 being empty netters. 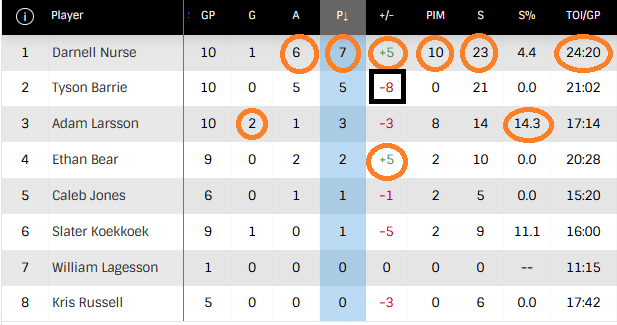 As usual we highlight the team leader in each listed category, and also single out the other extreme of the one stat designed (albeit rather poorly) to measure two-way performance, namely plus/minus.

Statistically speaking, Darnell Nurse stands out as the leader of the defence, almost across the board. He and his partner Ethan Bear have benefitted from a steady diet of ice time on the McDavid unit, but Tippett has his reasons for deploying them in such a manner.

Newcomer Tyson Barrie is starting to rack up the offensive numbers, but as advertised, has had some issues at the defensive end of the ice. 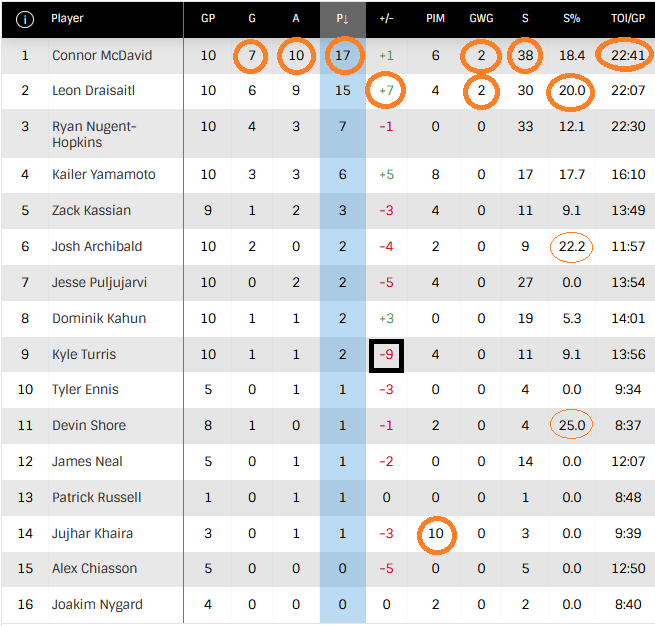 Here we go again with Connor McDavid, Leon Draisaitl and a cast of thousands. So far the elite duo has more points than their club has goals; put another way, the Oilers are more likely to score a goal that both are involved in, than with neither. Each has more points than the combined totals of Edmonton’s #3 and #4 scorers — Ryan Nugent-Hopkins and Kailer Yamamoto, predictably enough — while McDavid’s league-leading 17 points outstrip the 16 that have been collectively produced by the bottom dozen forwards. Only Zack Kassian has more than 2 points, and only Josh Archibald (who scored Edmonton’s lone empty netter to date) more than 1 goal.

Not only is that large bottom group not producing at the offensive end, the red numbers that litter the minus column show they’re struggling defensively as well. None more so than Kyle Turris, whose -9 is tied for the worst such mark in the NHL.

We close in our usual fashion by reviewing the set of 10 games through the lens of our own subjective ratings here at the Cult of Hockey. Regular readers will know that we grade on a scale of 1 to 10, the performance of every Edmonton Oilers player in every game the team plays, based on a combination of observation and interpretation of statistical output. Here are average grades for Games 1-10 along with our customary thumbnail comment summarizing each player’s contribution over that span: 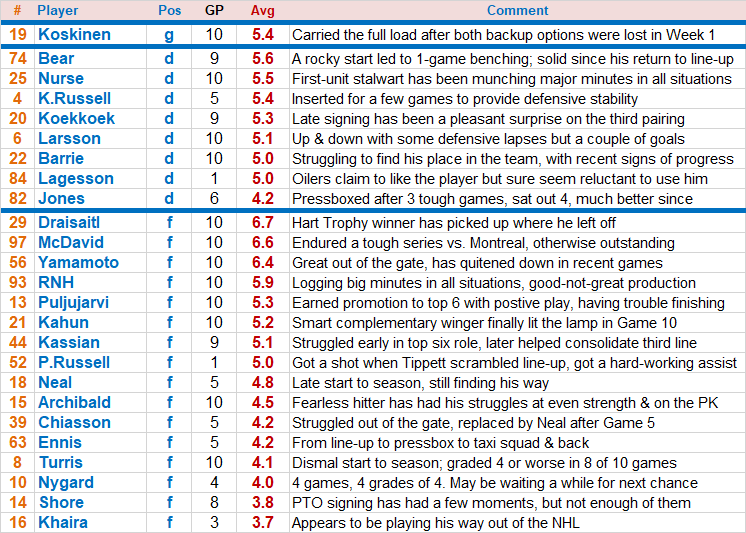 LEAVINS: How tough is it to win in the NHL? 9 Things

STAPLES: Player Grades from a thrilling 4-3 Oilers OT win over the Leafs

Previous articleThe Edmonton Oilers win Saturday another illustration that this is a tough game in a tough league: 9 Things
Next articleMajor depth moves as Edmonton Oilers going with Gaetan Haas and more