After their searing 8-2-0 run in Games 11-20 it was expected that Edmonton Oilers might come back to earth a little bit, and that was how things played out. Overall the Oilers stuck exactly to their season long script of winning 60% of their games and losing 40%. Alas, 100% of the 40% came in regulation, meaning that more than halfway through the season the Oil have not a single Bettman Point to add a little meat to the bones of their 18-12 record. Remarkably, the club has played but one overtime game all season, back in Game 10, when they topped Toronto after just 42 seconds of 3v3 hockey.

This most recent segment featured no such success against the Maple Leafs, who cruised through town with a three game sweep, outscoring the Oilers 13-1 in the process. But the hometown team laid waste to the teams in the lower echelons of the standings, posting a 6-1-0 mark against Ottawa, Calgary, and Vancouver, losing just Game 30 on the west coast Saturday night.

The third segment featured the best shot shares of the season by a wide margin, and indeed the best shot suppression numbers for a 10-game set since the 2018-19 season. Once again score effects were a major contributor. Whereas last segment the club spent giant swaths of time in the lead, this time around they played basically 50 minutes a game trailing Toronto, while two of their wins were achieved with third-period comebacks.

Their shooting success rate fell markedly, from an unsustainable 14.0% down to 8.5%. Overall they’ve scored 100 goals, the most in the league, on 945 shots for a conversion rate of 10.6%, while opponents have struck for 87 goals on 938 shots for a success rate of 9.3%. That works out to a 30-game PDO of 1.013, which in my view is sustainable for a team with the high-end finishing talent that the Oilers employ. Not all shots are created equal.

One takeaway from the third segment was the ongoing improvement of Edmonton’s defensive game, as detailed in this recent post. The 25 goals they allowed were the fewest in any segment since the very first of Dave Tippett’s regime. The good and bad news are both contained in this factoid: the Oilers allowed more goals in 3 games against Toronto (13) than they did in the other 7 games of the segment combined (12).

Turning now to individual performance during the most recent 10-game segment:

To the surprise of many observers, this one most definitely included, Mike Smith has emerged as Edmonton’s clear #1 netminder at this point in time. As always the question of sustainability lingers, especially given the volatile stopper’s hot-and-cold tendencies in recent seasons. But to this still-early point — he has, after all, started just 12 games — he’s been enjoying an outstanding run of play.

Mikko Koskinen has been relegated to the backup role since Smith’s return in early February, starting just 5 of the last 17 and holding opponents to 2 goals or fewer in 4 of those games. The one exception being a 3-goal first period vs. Toronto that cast his most recent segment performance in a harsher light.

Not quite the insane production of last segment when they combined for 8 goals and 20 points, but the top pairing of Tyson Barrie and Darnell Nurse still provided decent production.

This most recent stretch of games underscores the degree to which Tippett relies on / has been forced to rely on his veteran rearguards. The four men at the top of the list (sorted, as always, by points) have played on average over 600 NHL games, the bottom four fewer than 60. And it’s the top four who are carrying the mail by any of the metrics shown here, be it offensive production, goal differential, games played, ice time. While some supporters of the young ‘uns might seize on that last part and rail at their collective lack of opportunity, 0 points in a combined 24 GP is not a happy tale. Only the most defensively-oriented of the quartet, William Lagesson, sported a positive goal differential. 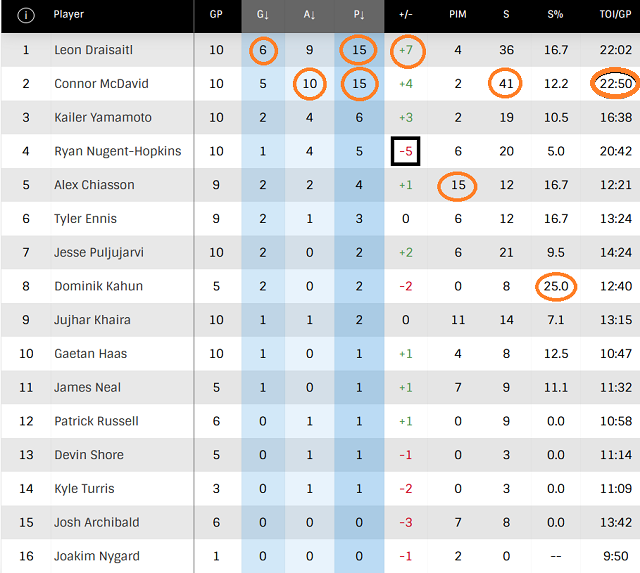 Zero surprises at the top of the list, it’s the same two names every time, segment after segment, year after year. Oil Country remains blessed to have two such extraordinary talents. This time around it was a dead heat between Connor McDavid and Leon Draisaitl at 15 points apiece, this after McDavid had his nose in front by 17-15 and 20-15 the previous two segments. For Draisaitl, this represents the third straight segment he not only posted exactly 15 points but also led the forwards in plus (+7, +6, +7). There’s a little bit of noise in there because he plays in all manpower situations, but strip away all the shorties and empty-netters in both directions and this is a player who at 5v5 has been on for 32 goals for, 13 against on a team that is +65/-60 in that game state.

A little less in the way of support scoring than in the exceptional Games 11-20 segment; nobody else with more than Kailer Yamamoto‘s 2 goals or 6 points, though a whole lot of depth players found a way to chip in at least occasionally. Of some concern is the continued dearth of even-strength scoring from Ryan Nugent-Hopkins, who scored just 2 points at evens, and was significantly outscored in the process.

We close in our usual fashion by reviewing the set of 10 games through the lens of our own subjective ratings here at the Cult of Hockey. Regular readers will know that we grade on a scale of 1 to 10, the performance of every Edmonton Oilers player in every game the team plays, based on a combination of observation and interpretation of statistical output. Here are average grades for Games 21-30 along with our customary thumbnail comment summarizing each player’s contribution over that span: 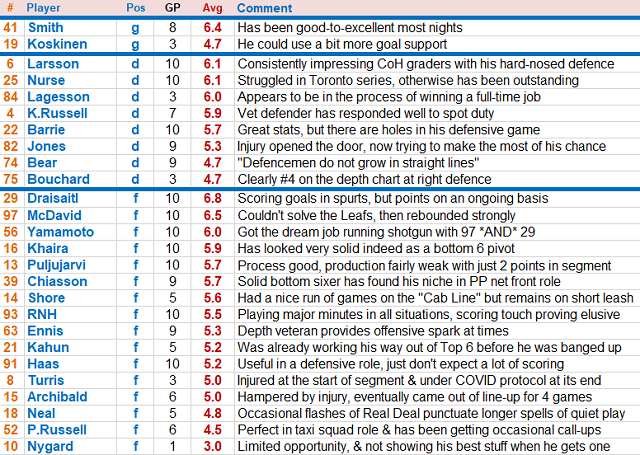