Player grades, Games 31-40: Edmonton's big stars keep on rolling, and so do the Oilers

Surprise! It’s a Segment Review/Game Day mash-up as the ever-evolving NHL schedule suddenly sees the Edmonton Oilers play Games #40 and 41 on consecutive days. Let’s concentrate primarily on reviewing the last 10 contests, then look ahead to tonight’s rematch in Ottawa at the bottom of this post.

It was steady as she goes for Dave Tippett’s Oilers in their fourth 10-game segment of the season. 6 more wins, with a couple of Bettman Points sprinkled in for a change and just 2 regulation losses. Not quite enough to keep pace with the red-hot Toronto Maple Leafs (8-1-1 in their last 10) in the race for first place in the NHL’s North (Canadian) Division, but very solidly in a playoff position with a fighting chance for home-ice advantage when the time comes.

The Oil relied on a familiar recipe to keep things heading in the right direction, namely their two-headed scoring monster, strong special teams, and adequate-to-excellent netminding.

Make it 20-8-2 over the last three segments combined, with a goal differential of +23 over that span. The most recent segment was dominated by close games, with the Oilers clinging to leads in many of them, which largely explains the negative shot differential. But the Oilers converted their shots at a rate of 11.9%, their opponents just 9.1%, leading to happy results on the scoreboard.

The Oilers were actually outscored 23-21 at 5v5 and 2-1 at 3v3, but held a whopping 7-2 advantage on special teams and popped a couple of empty netters for dessert. The combined success of their powerplay (27%) and penalty kill (91%) was reminiscent of their season long success on special teams in Tippett’s first season behind the bench.

Mike Smith remains in the ascendant as Edmonton’s #1 goalie, consistently garnering 70% of the starts since being activated from injured reserve two months ago today. He delivered a string of excellent performances (5 straight grades of 8 or higher) as the Oilers harvested at least 1 standings point from 6 of his 7 appearances. Backup Mikko Koskinen did a lot with a little, receiving just 5 real goals (plus a window-dressing empty-netter) of support in his 3 starts but turning that paltry output into 2 regulation wins.

Edmonton’s top pairing of Darnell Nurse and Tyson Barrie continued to make the most of heavy offensive minutes, with Nurse contributing his second segment of the season with 5 goals and Barrie his second of double-digit points. Nurse’s all-situations dominance is best seen by all those orange circles (designating team leader) on the right side of the chart, with a notable exception in the PiM column. He spent just 2 minutes in the box, indeed his only minor penalty in the last 22 games.

Adam Larsson and Kris Russell soaked up the defensive minutes, as usual. Among the youngsters vying for the third pairing, Ethan Bear stabilized his game with a run of solid performances, but while a turtle race has developed at 3LD where neither Caleb Jones nor William Lagesson has fully earned the confidence of the coaching staff. 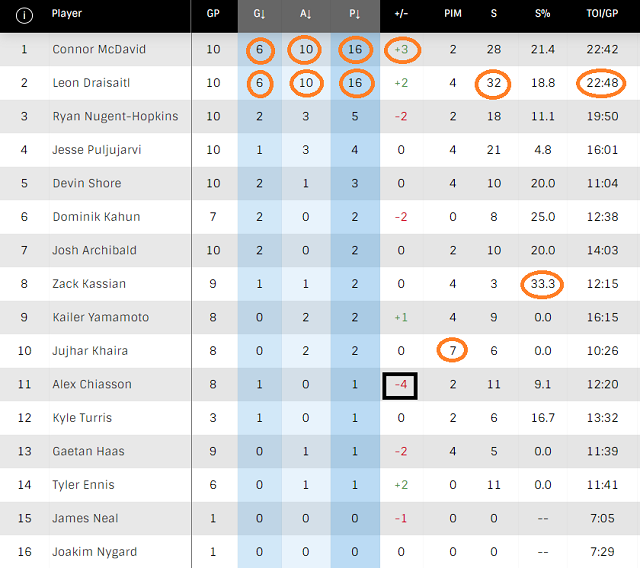 Dead heat at the top, where superstars Connor McDavid and Leon Draisaitl each produced 15+ points for the fourth segment in a row, remarkable consistency at the highest level of production. Not only are they the only forwards in the entire league producing over 1.5 points per game, each of them has done so in each and every 10-game segment to date. McDavid and Draisaitl have maintained that consistency whether playing on separate lines or (more recently) together on a single, supercharged unit.

That’s the good news. The bad (or astonishing, depending on one’s point of view) is that they’ve been able to maintain that transcendent level of production despite a notable lack of support scoring. Only once in four segments has the #3 scorer among Oilers forwards chipped in as much as half as many points as #2. That was Ryan Nugent-Hopkins in Segment 2, not coincidentally the only 10-game chunk where the Oilers as a team scored more goals (42) than McDavid and Draisaitl scored points (35).

Indeed, the power couple has consistently received more support scoring from the top defence pairing than from other forwards. That trend became more stark than ever in Games 31-40, where each of the top stars scored at least 4 more goals and at least 7 more assists more than every other forward.

The duo has soared far ahead of the pack in the NHL scoring race, where McDavid leads Draisaitl by 7 points and all others by at least 17. This despite the fact that only one other Oilers forward ranks among the league’s top 150 (RNH is currently 62nd, largely by scoring 16 of his 28 points on the powerplay).

We close in our usual fashion by reviewing the set of 10 games through the lens of our own subjective ratings here at the Cult of Hockey. Regular readers will know that we grade on a scale of 1 to 10, the performance of every Edmonton Oilers player in every game the team plays, based on a combination of observation and interpretation of statistical output. Here are average grades for Games 31-40 along with our customary thumbnail comment summarizing each player’s contribution over that span: 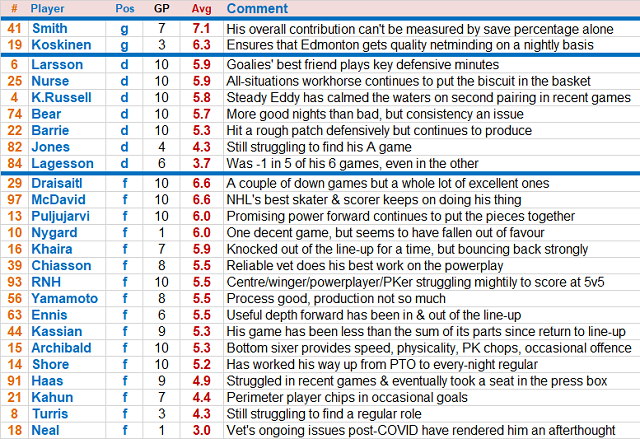 The Oilers finish up their back-to-back in the nation’s capital tonight, and with it their season series with the Senators. So far, so successful, as the Oil have won all 8 games in regulation, with Draisaitl (10-11-21) and McDavid (4-16-20) combining for a ridiculous 41 points.

As usual, Tippett was tight-lipped about possible line-up changes, producing this boilerplate response when questioned at the morning media avail:

“We have some injury issues to monitor so we will figure that out at game time.” Tippett on possible lineup changes for tonight.

It’s virtually certain that Smith will start in goal after Koskinen played 60 minutes yesterday afternoon. Game time is a more-normal 5pm MDT. Today’s game was pushed up by a day to facilitate a re-scheduled game in Calgary in the late slot of Hockey Night in Canada on Saturday. After that, Tippett suggested the club will have a few days off as a pair of games scheduled for Apr 12 & 14 against COVID-ridden Vancouver Canucks will almost certainly be postponed.

STAPLES: Broberg and Holloway get some love from prospect analysts