Surprise! It’s a Segment Review/Game Day mash-up as the ever-evolving NHL schedule suddenly sees the Edmonton Oilers play Games # 50 and 51 on consecutive days. Let’s concentrate primarily on reviewing the last 10 contests, then look ahead to tonight’s rematch in Vancouver at the bottom of this post.

Such is the nature of the 2021 NHL season that schedule changes, formerly the rarest of rare events, now generate boilerplate material. In the case of the Edmonton Oilers, after playing the first 34 games according to the plan, things went haywire, with no fewer than 11 of their last 22 games being rescheduled in one manner or another. Tonight’s game at Vancouver is the last to be played as per the original slate, even as it is now Game 51 rather than 55. The 5 remaining games are all rescheduled from previously postponed series: two at Montreal, three vs. the Canucks in Edmonton.

Just as the Oilers themselves are squeezing in games, so to must we at the Cult of Hockey squeeze in our periodic segment reviews in the tiny gap between back-to-back contests. It’s actually been 26 days since our last such review, as the Oil have found themselves in hurry-up-and-wait mode at times. But now it’s full steam ahead: tonight’s game will be the fifth in seven days.

Through it all the Oilers have persevered, even thrived.

Over those same four segments, the Oilers have outscored their collective opponents by 133 goals to 98, a +35-goal differential. This despite a net -45 on the shot clock. Edmonton has converted 11.4% of its shots into goals, their opponents just 8.1%.

In the most recent 10-game stretch, make that 11.6% and 6.6% respectively, a staggering 5% difference in shooting efficiency that is reflected in the PDO of 1.050. While that seems certain to regress towards the mean, the evidence is mounting that the Oilers convert their shots at a higher than average rate. Their 11.0% all-situations shooting percentage on the season ranks fourth in the NHL). Not totally unexpected given the top end talent’s ability to both create high-quality shots and to finish their chances.

More surprising by far is the squad’s success at keeping the puck out of their own net. The goaltenders’ combined save percentage of 91.3% ranks fifth in the NHL in 2021 despite a rocky start in that department. Their performance only continued to improve (to .934) in the most recent 10 games, in which the 20 goals allowed by the Oilers was their best recorded segment in a decade. Not since Nikolai Khabibulin posted a truly-unsustainable .960 save percentage in October of 2011 have the Oil done a better job of keeping the puck out of their net (just 14 goals against in their first 10 games, still a miracle).

At 5v5 the Oilers kept their head above water with 18 goals for, 16 against, but it was on special teams where they really excelled. The powerplay scored 7 times, the penalty kill allowed just 3. More impressive still was the production in goalie-out scenarios, with the Oilers potting 6 (!) empty netters in the 10 games, while allowing just 1 (the first such of the season) to the team with the extra attacker. When the Oilers had their own stopper on the bench, they scored 2 and allowed 0 (one was also a 6v4 powerplay goal, if you’re wondering why the numbers don’t quite add up).

Turning to the individual side, let’s start between the pipes

The Oilers held their opponents to 1 goal or fewer in 6 of their 7 wins this past segment, with only last night’s 5-3 win in Vancouver going against form. Mike Smith handled the lion’s share of the load, starting 8 of 9 at one point. Mikko Koskinen continues to deliver steady netminding in his sporadic appearances, mostly in back-to-back scenarios.

The top unit of Tyson Barrie and Darnell Nurse continued to deliver, with Barrie continuing his torrid offensive production while Nurse took care of business at both ends of the ice. His +9 jumps off the page, buttressed by a +6/-0 in empty net scenarios. His +29 on the season currently leads NHL: defencemen.

The rest of the d-corps was much lower event, and generally played with lower-event linemates. They collectively excelled at Job One, keeping the puck out of their net. 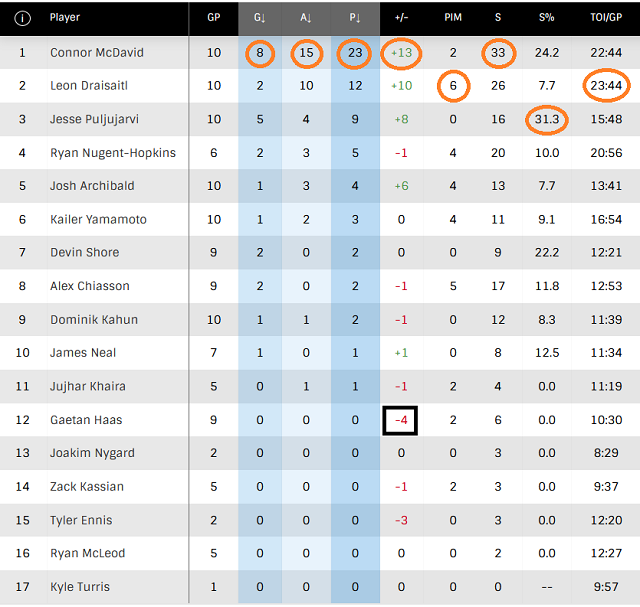 How hot is Connor McDavid? So hot that he scored more points in this segment (23) than the entire opposition scored goals (20)! That aggregate “score” was no fluke, in that McDavid outscored the opposition in 6 of Edmonton’s 7 wins, and tied them in the other one. Indeed, in 5 of those wins, the Oilers were 2+ goals clear based on #97’s production alone. Indeed, with McDavid on the ice in all situations, the Oilers outscored the opposition 26-6 (!!), including an official +13 ranking over the span.

Leon Draisaitl had given his best to keep up to McDavid all season, but finally fell back in segment 5, in which he “only” scored 12 points, down from his customary 15. That drop came on the goal side of the ledger (just 2), even as he keeps piling up the assists at a steady rate. He’s been between 9-11 assists in ever segment to date, and on the season is just 1 apple below the 1.00/GP rate. Meanwhile, his own +/- swelled to +32 on the year, currently #1 in the league.

This was an extremely promising stretch for Jesse Puljujarvi, whose 5 goals and 9 points rank among the very best non-McD/Drai segments all season long. All of those points were scored at even strength, and all but one at 5v5.

The rest of the forward corps did their primary job of sawing off their part of the game. Josh Archibald‘s +6 stands out, though 4 of those pluses (and 3 of his points) came with the other team’s goalie on the bench.

We close in our usual fashion by reviewing the set of 10 games through the lens of our own subjective ratings here at the Cult of Hockey. Regular readers will know that we grade on a scale of 1 to 10, the performance of every Edmonton Oilers player in every game the team plays, based on a combination of observation and interpretation of statistical output. Here are average grades for Games 41-50 along with our customary thumbnail comment summarizing each player’s contribution over that span: 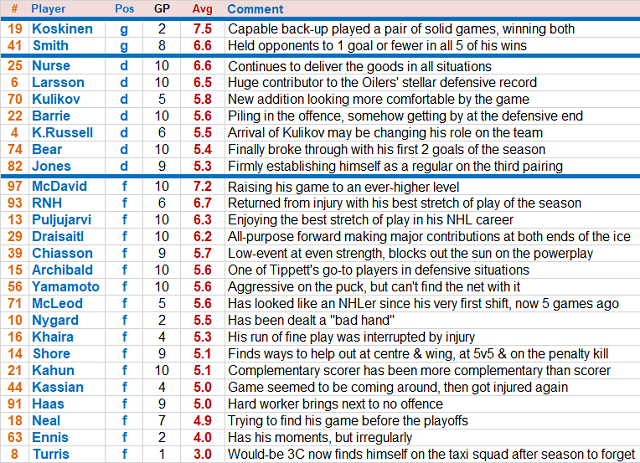 With the mathematical clinching of a playoff berth last night, the Oilers’ season is now officially in “garbage time”. The squad is locked into second place, 8 behind Toronto and 7 ahead of Winnipeg and Montreal. Their first-round opponent will be determined by what happens between those two clubs, with Edmonton’s major effect on the race being the two make-up games in Montreal next week. But tonight’s game plus two more to come against Vancouver will have next to no impact on the final standings.

As for Vancouver, “garbage time” would be a pretty good description of their entire season. From a team-wide outbreak of COVID-19 to an unwieldy schedule at both ends of the campaign, from an injury to star Elias Pettersson to sexual misconduct allegations against Jake Virtanen, it’s been a real tough year for the west coast club. In addition to Pettersson, the squad is currently missing most of their bottom six forwards, and some of those healthy enough to keep labouring through are reportedly below 100%. They still have 10 games to play before finally wrapping up on May 19.

In recent viewings the Canucks gave an honest effort before running out of steam down the stretch. Last night’s game was a no-hitter and there is no reason to expect anything different from a club in survival mode. For their part the Oilers didn’t take any liberties and frankly have no reason to.

Dave Tippett says there might be some lineup changes tonight. Some bumps and bruises. TBD.

In his morning avail Dave Tippett confirmed Mike Smith would be tonight’s starting goalie. He made his usual comment about having a couple of nicked-up players, so no line-up has been confirmed. Not impossible that Evan Bouchard might finally get a game, especially given reports that Ethan Bear absorbed a bit of a knock in the late going last night.

STAPLES: Jujhar Khaira draws back in after concussion concerns