Edmonton Oilers finally took to the ice on Saturday evening after an excruciating week “off” in which a series of games was postponed. Rather than exhibit any rust, the Oilers instead showed the benefits of fresh legs and more practice time than at any prior point of the season, rolling to a deserved 3-0 shutout of the Winnipeg Jets.

Mike Smith played well in recording the clean sheet, but he had a whole lot of help from his friends. While the shot clock showed 26-25 Winnipeg suggesting a tight game, the Oilers held a significant 9-3 advantage in Grade A Scoring Chances as per our own measure here at the Cult of Hockey (running count). Meanwhile NaturalStatTrick‘s automated count had the Oilers with a resounding 18-3 edge in the somewhat parallel High Danger Chances, including a 14-1 bulge at even strength. Fourteen to one!

Fair to say the better team won this game, and won it fairly handily. The Oilers stuck to Dave Tippett’s game plan of trapping and tight checking, with the bottom three lines all contributing scoreless hockey while the top unit produced one goal at even strength and added two more on the powerplay.

#4 Kris Russell, 7. Winnipeg mustered just 4 shots on goal, none of them dangerous, during his 16:23 at even strength. Russell blocked 2 shots and fired a couple of his own at the other end. Made a nice 1-on-1 stop of big Pierre-Luc Dubois at the Oilers blueline.

#6 Adam Larsson, 8. Played a heavy 23:45 including 4 seconds on the powerplay and 2:20 on the penalty kill, a representative ratio of his responsibilities. His 27 shifts and 21:21 at even strength both led the entire team, not a common distinction for Larsson. Saw plenty of Jets snipers Mark Scheifele, Kyle Connor, and Pierre-Luc Dubois, with the Oilers dominating possession during those important minutes. 4 hits, 3 blocks, uncounted won battles and safe handles of the puck.

#10 Joakim Nygard, 6. Back in the line-up on a fourth line with Shore and Kassian, and was effective in a limited role. Fast and aggressive on the puck and caused the Jets some grief on the forecheck. Drew a penalty.

#13 Jesse Puljujarvi, 8. His night was defined by one great shift early in the third period in which he first made an important defensive stop of Scheifele, then contributed to the puck recovery and possession at the good end before rolling off his check into the slot and popping McDavid’s pass into the top corner past Connor Hellebuyck. That gave the Oilers a 2-0 lead on a shift that easily could have ended 1-1. Did a great job along the walls and in the  trenches all night. Made a fine play to set up Draisaitl for a good look.

#14 Devin Shore, 6. Played 10 clean minutes as an emergency 4C and got the job done. Led Oilers forwards with 2:20 on the penalty kill, though he did make one error in judgment when he stepped up to support Nurse and Yamamoto on a shorthanded 2-on-1 rather than minding the store and covering off for the rushing d-man. That nearly proved costly when Scheifele got loose on the counter attack, but Smith had his back with a fine stop. Took 1 shot, blocked 3. Just 1/5=20% on the dot.

#15 Josh Archibald, 6. Typical grinding effort, leading the Oilers with 5 hits. Had a good night on the penalty kill. Drew a pair of penalties, one of which killed an early Jets power play, the other leading directly to Chiasson’s 3-0 goal.

#16 Jujhar Khaira, 5. His best moment came when he stole the puck off of Hellebuyck behind the Jets net, circled out into wide ice and fired a hard wrist shot that tested the scrambling netminder. Took a somewhat predictable but nonetheless avoidable penalty shortly after the Oilers opened the scoring on their third consecutive powerplay opportunity.

#21 Dominik Kahun, 7. Played with a lot of jump in his step. Made a terrific lead pass to spring Yamamoto on a breakaway. Involved in a terrific give and go with the same teammate to generate a nice Grade B shot of his own. But his best work was done on the defensive side of the puck, where his hustle, positioning and effective backchecking put out a couple of fires. Cut out 2 dangerous passes across the defensive slot. Played just 9 minutes but it was one of his best games as an Oiler.

#22 Tyson Barrie, 7. His game got off to a bad start when he flicked the puck over the glass just 13 seconds in. Did his own damage when the Oilers had the man advantage. His one timer from the point opened the scoring and stood up as the game winner. Another point blast was tipped home by Chiasson for the 3-0 clincher. With the Oilers defending the lead Tippett scaled back his minutes in the third and relied heavily on Larsson.

#25 Darnell Nurse, 7. All over the ice, mostly in a good way. No points but all kinds of crooked numbers elsewhere on the sheet including 4 shots on goal, 7 shot attempts, 4 hits, a takeaway, 2 blocked shots, and +1. Made a terrific pass to Draisaitl to set up a good chance.

#29 Leon Draisaitl, 8. Played a massive 27:08 to lead both teams, and had a big impact. Also led Oilers forwards with 3 shots on goal (all Grade A chances), 9 shot attempts, and 2 takeaways while chipping in one assist at even strength and another on the powerplay. While nominally playing left wing, he did his best work on the faceoff dot where he recorded 12/18=67% on a night the rest of his teammates combined for just 8/28=29%. That included every faceoff on both special teams until a late powerplay in garbage time went to the Shore unit. The Big Diesel has added the “FOGO” (face off, get off) role on the penalty kill to his mountain of other responsibilities. We went 2/4=50% in that role while playing just 38 (important) seconds on the PK., meaning he was able to get off within 10 seconds on average, the puck safely cleared out of the zone. Hustled on the backcheck and cleared the d-zone efficiently.

#39 Alex Chiasson, 7. Played a fine two-way game. Intercepted an errant pass, broke in alone on goal, made a good deke and high backhand shot but was stoned by the Vezina Trophy winner. Had a great chance from inside the blue paint on the powerplay but was robbed a second time. Finally got rewarded when his combined screen/mid-air deflection of Barrie’s point shot solved Hellebuyck for the 3-0 clincher. Safe and effective along the walls.

#41 Mike Smith, 8. In truth he had little enough work to do that “great” is stretching the point, other than he does get a +1 for recording the shutout. Rock solid all night long, and made 3 huge saves when called upon, stopping Tucker Poolman’s uncontested drive from the slot in the game’s first minute, stoning Scheifele on a breakaway in the middle frame, and flashing out a pad on a tricky shot that deflected off of Nurse just outside the crease. Handled the puck well to my eye, even as he was officially charged with 4 giveaways by a perhaps overzealous minor official. (When a goalie moves a puck to a less dangerous position, even if it goes to an opponent, is not my idea of a giveaway.) Now has 3 shutouts on the season, all on the road, all by the same 3-0 score (at Montreal, Vancouver, and now Winnipeg). 26 shots, 26 saves, 1.000 save percentage.

#44 Zack Kassian, 6. A solid night’s work. Had a great chance when he tipped Draisaitl’s excellent feed on net from close range but was turned aside by Hellebuyck. Had another excellent look when he cut in on goal with the puck on his forehand but decided to pass it off to Shore and didn’t connect. Landed 4 hits, skated well. 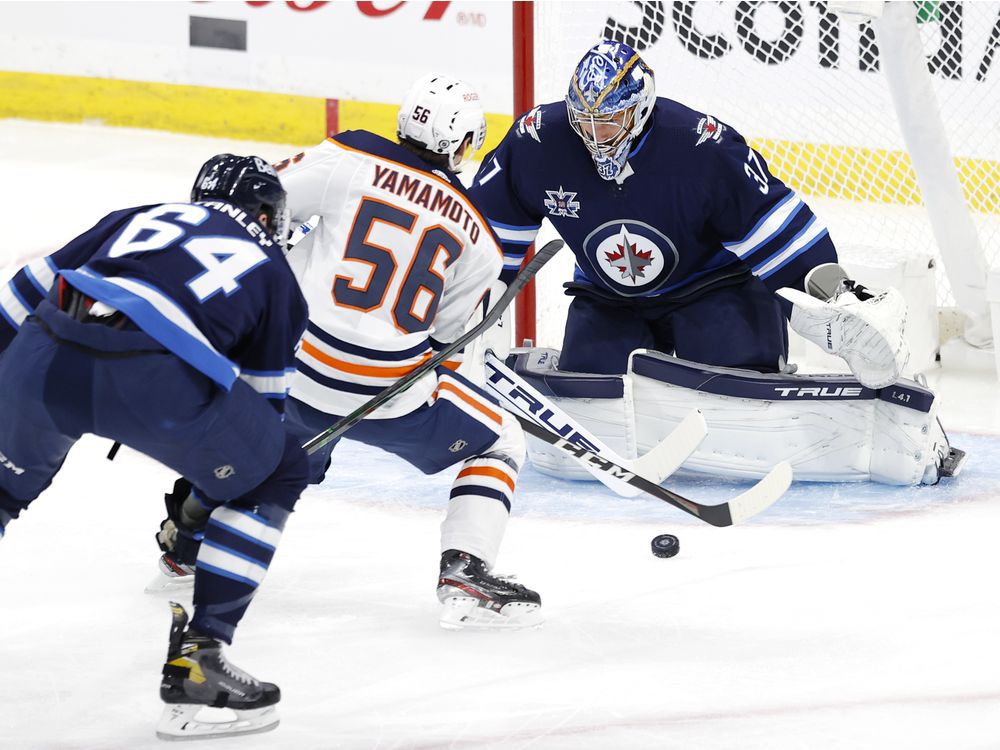 #56 Kailer Yamamoto, 7. He was hustling in both directions all night long. Robbed by Hellebuyck on a breakaway (pictured) when he couldn’t quite stuff the puck under the netminder’s outstretched pad after a nifty deke. Awarded a bit of a cheap secondary assist on the Barrie PP goal but earned it on the strength of a good night’s work. Now has 1-1-2 in 3 games replacing RNH on the first powerplay.

#74 Ethan Bear, 6. Made a terrific stretch pass to McDavid that led to a dangerous 3-man rush and chance by Draisaitl. Defended hard and put out a couple of small fires. Did take a penalty for a borderline hold.

#82 Caleb Jones, 5. Hard to believe he spent over 80% of his ice time with Bear given their wildly different on-ice shot attempts: +8/-7 for Bear, +3/-10 for Jones. But the two fared very differently when briefly teamed up with other partners. Jones had no serious defensive issues, though he did cause himself some grief when he settled the puck down for a Russell Reset while both teams made line changes, then badly missed a routine outlet pass that led directly to another wave of Jets attackers who were a lot fresher than Jones himself was at that moment.  Drew a penalty.

#97 Connor McDavid, 7. A pair of primary assists on the first two goals, the first a rote pass to Barrie for the powerplay one-timer from centre point, the other a gorgeous backhand feed to Puljujarvi in the slot. 2/7=29% on the dot. Skated miles but had trouble penetrating the Jets defence with the puck and was limited to just 1 shot on goal. Finally broke through late but narrowly missed the post with a backhand shot that had Hellebuyck cleanly beaten. Made a fine defensive play deep in Edmonton territory in the very late going to help preserve the shutout.

STAPLES: Oilers searching for solutions on the attack